Impinj (PI) recently reported their Q320 results and my thesis, written here has started to play out. The stock dropped about 12% after the 10-Q report was released but has since recovered and is close to its ATH.

We continue to see structural problems and inventory obsolescence risks combined with COVID headwinds leaving us baffled by the 5X revenue multiple valuation.

Impinj has recently started ramping a new product, M700. The adaption of this new product would put the existing inventory at risk of obsolescence and with the growth of finished goods we see a continued risk of write-downs in the future.

The RFID industry has structural issues and alternative solutions exist that are 75%-95% cheaper which has resulted in slow adaptation for the technology. When retailers decide on adopting barcode or RFID technology, the marginal cost of ink in the barcode system is close to half a penny while RFID average 5-10 cents.

With retailers struggling to survive due to the continued headwinds from the pandemic makes us believe RFID adoption will slow down when competing solutions allow them to keep costs down.

Some of our competitors may devote more resources than we can to the development, promotion, sale and support of their products. Our competitors include companies that have much greater financial, operating, research and development, marketing and other resources than us. These competitors may discount their products to gain market share. In doing so, they could simply accept smaller margins, or they could maintain margins by achieving cost savings through better, more efficient designs or production methods. To gain share, competitors could also bundle near-field communication RFID, or NFC, products with RAIN products, or stationary readers with handheld readers. – 10-Q Q320 p.34

The other problem with RFID chips is that the chip has characteristics of a commodity with customers having policies in place to order from a diverse number of suppliers.

Some of our customers have policies requiring diverse supplier bases to enhance competition and, consequently, maintain multiple RAIN product providers. Consequently, they tend to avoid purchasing exclusively from us or promoting our brand. Our ability to increase order sizes from these customers and maintain or increase our market share is constrained by these policies. 10-Q Q320 p.34

The implication here is that it will be very unlikely customers allows themselves to be captive to Impinj. Without a competitive advantage, growth will create little to no value for shareholders.

Impinj has historically been focused on two industries, airlines and retail with retail being the primary focus. In the latest earnings call, airlines have quietly disappeared as a discussion, we believe this to be due to the current environment. Retail continues to face headwinds from the current environment which we believe will last longer than most expect, resulting in slower adoption of RFID and continued pressure on Impinj.

Goining back to the airline industry, RFID is a technology that has been around for 20 years and adoption has been slow. Delta is the only airline using RFID currently and it seven years for them to adopt the technology. According to a former employee at Avery Dennison, slow adoption rates might stem from it is hard to quantify the value proposition when comparing it with alternative solutions. It might also be seen as an outdated technology by decision-makers at this point with it being introduced 20 years ago. – p.23

A third headwind we see towards Impinjs growth is the deflationary pricing of the chips where Impinj must increase the volume just to keep the same revenue level.

We think implied adoption speed is overly optimistic and find Impinj absurdly overvalued, trading at 5x twelve months trailing sales with growth most likely being close to flat quarter-over-quarter for the next couple of quarters, quickly shrinking the 51m net cash available to fund operations.

Adj EBIDTA and its misuse

A measurement management likes to use to measure its performance by, is Adj EBITDA, where costs deemed as “one time” or non-cash is added back as it is claimed not to affect continued operations. The measurement, in our view, is adding back as many costs as management can get away with by investors and write them of as non important while it continues to have real effect on the business.

Adj EBITDA is defined as the following:

We believe these costs are real costs of running the business and should not be disregarded. Depreciation is machinery that needs to be replaced in the future and therefore will require cash, how is stock-based compensation not an expense? If it is not an expense to the business itself, then it is a cost to shareholders as their share of the future profits gets diluted. To support our arguments regarding these all too real costs we borrow the following quote from Buffet in Berkshire Hathaway shareholder letter 2015:

[…] it has become common for managers to tell their owners to ignore certain expense items that are all too real ‘Stock-based compensation’ is the most egregious example. The very name says it all: ‘compensation.’ If compensation isn’t an expense, what is it? And, if real and recurring expenses don’t belong in the calculation of earnings, where in the world do they belong? – P.16

Comparing the adj EBITDA to measurements we find more representative of actual business results, we can see that the fundamentals have deteriorated since the IPO in Q216. We can further see that the improvements in adj EBITDA during 2019 is mostly due to the fact of increased stock-based compensation being added back and not due to fundamental improvements in the underlying business. 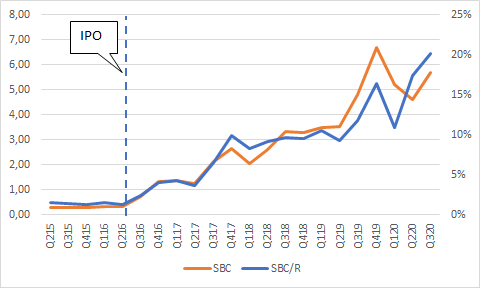 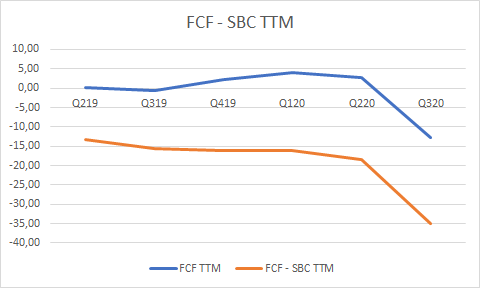 Impinj further has 4 437m shares which are currently considered anti-dilutive and not accounted for in diluted shares currently. If the stock price appreciates these options would become dilute, risking to inflate the share base up to 19% and potentially affecting the share price negatively.

The continued thesis is that Impinj will have further headwinds in revenue growth, either from increased competition or from lower demand in the retail and airline sector due to COVID. This leads to continued losses and eventually draining the cash reserves.

Furthermore, we continue to see a high risk of inventory obsolescence and/or gross margin compression with 65% of the inventory being finished goods and the ramping of M700 chips.

Impinj will likely never be able to produce an economic profit due to the product being a commodity and price remains the only competitive factor. Further, Impinj will have a hard time reaching the scale needed to effectively compete with established players such as NXP.

If this does not play as expected and Impinj’s stock price appreciate there will be additional pressure on the stock as current, anti-dilutive stock options would start to vest and inflate the number of shares and potentially put pressure on the share price.

Disclosure: I am/we are short PI. I wrote this article myself, and it expresses my own opinions. I am not receiving compensation for it (other than from Seeking Alpha). I have no business relationship with any company whose stock is mentioned in this article.