Risks to the economic outlook for the UK remain tilted to the downside amid the ongoing Brexit uncertainty. This has gained in prominence with no-Brexit risks back on the rise after Boris Johnson saw a landslide victory in the first round of the Conservative leadership contest (full analysis). Consequently, in reaction to this, the Pound continued to edge lower, trading at a fresh 2019 low vs. the USD (ex-flash crash), while also slipping to its lowest level since early January against the Euro.

However, while the UK economy has indeed been softening, this has failed to dent the internationally exposed FTSE 100. Since the Brexit referendum, typically the market trend has been that when GBP falls, the FTSE 100 is supported. As a reminder, 2/3 of the revenue generated among FTSE 100 companies are from overseas, thus repatriated profits are worth more when the Pound falls. The same cannot be said about the domestically focused FTSE 250 whereby a drop in the Pound also coincides with the FTSE 250 underperforming relative to the FTSE 100.

What the Move in the Pound Implies for UK Equities

The chart below provides a 6-month rolling correlation between the FTSE 100 & FTSE 250 and the Pound. What this shows is that when the Pound drops, the FTSE 100 finds supports (this trend is increasing), while the FTSE 250 dips, although the positive correlation with the latter has diminished notably since the beginning of the year. That said, this also shows that a softer Pound should see the FTSE 100 outperform relative to the FTSE 250.

The outlook for the Pound has become increasingly bearish following the closing break through the October 2016 flash crash trendline. In turn, this exposes GBPUSD for a test of the 1.25 handle, while there is little in the way of support until 1.2435 and 1.2410. With that said, a slightly hawkish tilt in light of recent BoE commentary could provide a bounce for the Pound, however, this would not be expected to last given that the BoE is largely on the sidelines until Brexit clarity is reached. 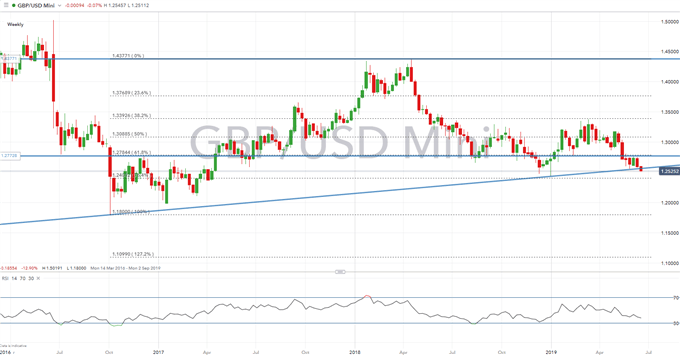 Market sentiment analysis: Trader confidence remains high, with strong corporate earnings among the factors helping stocks at the expense of safe-haven assets like the US Dollar. These trends look set to continue near-term over a […]