July housing permits and starts showed a decisive rebound, too close to their respective expansion highs. Because housing is such an important long leading indicator for the economy 12+ months out, this is a good time to update.

A note about coronavirus

First things first: ultimately, the economy over the next few months or year is going to be determined by the course of the coronavirus pandemic, and people’s behavioral reactions to that pandemic. While the behavior of the virus itself is not so difficult to determine, the political responses to it, being driven by decisions made (or not made) by the President and 50 Governors, is almost impossible to forecast. Those political responses, in turn, will drive the overall human responses to the pandemic, including economic behavior.

That being said, I do believe there is a “pain threshold” regardless of political leanings where if the outbreak is wide enough and severe enough, new restrictions on behavior (mandatory mask-wearing) and economic activity (e.g. re-closure of indoor restaurants and bars) are put in place, and ordinary citizens curtail riskier behavior. We have already seen that take place in Arizona, for example, and we appear to see the start of that with school districts and colleges and universities that reopened to in-person classes within the past several weeks.

In short, the course of the pandemic is a paramount consideration that will modify the analysis that follows herein. Over the next few months, I expect a waxing and waning as complacency and the “pain threshold” set upper and lower bounds on the rate of new infections and deaths.

Even though these are unique times, the sequence for activity in the housing market is largely intact. That is:

Let’s update the first three of those four items.

Mortgage rates have continued to decline to repeated all-time lows in the past 4 months, falling below the previous record low of 3.3% in late April, and continuing to set new lows since, most recently 2.88% on a weekly average basis two weeks ago:

The first housing metric to react was purchase mortgage applications, which rose to new 10+ year highs beginning in April: 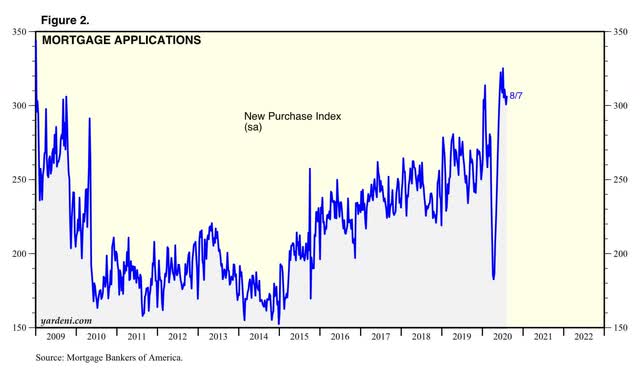 Next, the below graph is an update of one I have run many times over the past decade, showing the YoY change in mortgage rates (blue, inverted so that lower rates show as higher) vs. single family permits, which are the least volatile among all of the housing indicators (red, /10 for scale):

Mortgage rates have trended almost constantly lower since November 2018, giving a boost to housing. While the impact of the pandemic knocked permits down by over 15% YoY in April, with July’s data, housing starts, which are more volatile and tend to lag permits by a month or so, are within 8% of their pre-pandemic high. Permits are within 3%. And single family permits, equally leading but the least volatile of all, are only 1.1% below their January pre-pandemic high, and higher than any other month:

Permits and starts confirm new home sales, which are much more volatile, but tend to be even more leading, which made up virtually all of their pandemic decline in June:

Finally, here are new homes sales vs. several measures of house prices, all normed to 100 as of January of this year:

And here is the YoY% change in those same four metrics since January 2011 (averaged quarterly to cut down on noise):

Prices continued to increase in late winter and early spring before declining in April and rebounding in May and June.

Two months ago, in reporting on housing, I wrote:

Since mortgage rates, which lead sales, have continued to decline, I expect the rebound in sales to continue, while pressure on prices continues.”

This has proven correct. Because mortgage rates have declined even further since then, I expect the rebound in sales and new construction to go on to new 10+ year highs in the next several months. Further, with the rebound firmly in place, I expect house prices to firm further as well.

All of this, of course, is subject to changes in the course of the pandemic, and government responses to it, but I am not expecting any significant changes in those in the next several months.