Hess Corporation (NYSE:HES) has recently published its Q4 results. The company failed to show EPS in line with analysts’ estimations, but revenue surprised Wall Street a bit. As a reminder, Q3 results also did not live up to forecasts of analysts.

Investors were not content with more profound than anticipated quarterly loss, and the share price slid, extending a two-week sell-off. I would not say only the firm-specific downside catalysts fueled this correction. This January, the coronavirus risk has been irritating energy investors who pondered how serious was the magnitude of its onerous impact on oil and fuel demand in China. So, recent share price weakness is partly attributable to the oil market-specific concerns.

I had already covered the stock a few times in 2019. Initially, I was bullish, but then reduced my short-term optimism slightly as valuation was too inflated and flashing signs of recession raised concerns the market would become more skeptical regarding equities in the cyclical industries.

In 2019, the stock rode a bumpy rollercoaster, as the market experienced bouts of doubt. During most of the year, HES easily trounced the energy sector and the S&P 500, but in November, the stock was severely battered as Tullow Oil commented on the heavy sulfurous oil found at the Orinduik Block. The price correction, however, was not entirely rational, as the commerciality of Hess’s developments offshore Guyana had already been assessed long before.

Besides, insiders were not pronouncedly bullish despite HES climbing higher. Since March, they had been selling consistently, perhaps fretting about the Stabroek Block growth premium that might abruptly evaporate and send the share price down.

Certain conclusions can be drawn regarding the corporation’s current performance.

First and foremost, Q4 and FY 2019 results showed that HES has been consistently executing its growth strategy, which relies on the Bakken Formation and oil fields offshore Guyana. In North Dakota, its production is growing by leaps and bounds. In Q4, the Bakken shale play (Middle Bakken and Three Forks) brought 174 kboepd on average (including gas, NGL, and light oil), which represents a starling increase of around 38% compared to the fourth quarter of 2018. Net oil output from wells in the Bakken rose 28%.

Also, oilfields in the Gulf of Mexico delivered a 2.9% production increase to 70 kboepd.

Most importantly, the corporation has a bullish outlook regarding its 2020 output growth. As it was mentioned in the news release, 2020 production (excluding Libya) is anticipated to increase around 13.8%-15.5% vs. 2019 and reach 330-335 kboepd.

Since production in the Bakken is significantly gas-weighted, natural gas & NGL prices are of high importance. Unfortunately, in Q4, the average realized selling prices for these commodities nosedived and resulted in lower revenue and pressure on margins. So, while production surged spurred by new wells in North Dakota, the 2019 total revenue increased by only 2.6%, which was not enough to cover all expenses. More profound loss in turn hindered HES from meeting analysts’ assumptions on quarterly EPS and resulted in the share price slump.

Second and perhaps the most important thing is that the transformative Guyanese strategy is on course. In December, production from the Liza Phase 1 Development at the Stabroek Block (Hess has a 30% interest) was finally commenced, thus opening a new era in the corporation’s history. Another FPSO vessel, the Liza Unity (around 220 gross kboepd capacity), is under construction; the first oil is due by mid-2022. The Payara development (yet to be sanctioned) will bring another gross 220 kboepd in approximately 2023. All these developments will catapult Hess’s revenue and free cash flow. 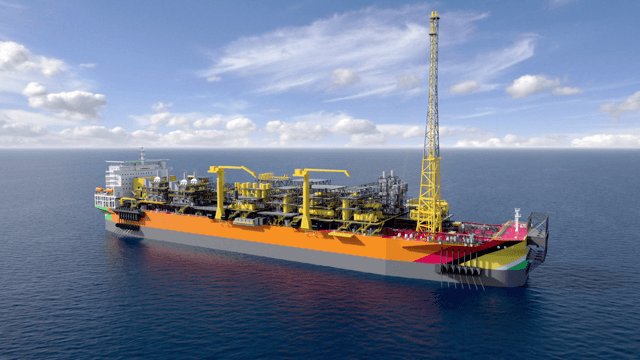 Besides, gross recoverable resources of the prolific Stabroek Block were revised higher and now are around 8 billion boe, 2 billion boe more than previously expected. The Mako-1 and the Uaru discoveries made in December and January respectively instill confidence the area’s potential will be extended further.

Now let’s briefly touch upon profits. First, 2019 EBIT was far from exemplary. The amount of income the company was capable of generating before covering interest expense and paying tax dropped 10.2% YoY, while the EBIT margin was weaker by less than one percent. The Q4 operating income also fell, as opex, DD&A, and even (surprisingly) General & Administrative expenses crept higher. After all, in Q4, Hess switched to negative earnings before tax (abbreviated as EBT) and booked a GAAP net loss of $0.73 per share and adjusted net loss of $0.6 per share. The main culprit was the E&P segment, while Midstream was profitable thanks to higher throughput volumes. Full-year loss is now deeper than it was in 2018 and stands at $412 million below zero.

Frankly, the red bottom line has been a concern since the very beginning of the previous prolonged Brent slump; while other oil players managed to quickly return to profitability as the commodity price recuperated, HES was unable to ultimately turn an annual profit, and this issue had nothing to do with high capex required to finance its growth initiatives across the portfolio and especially in Guyana. Losses were caused by weak margins, which, in turn, mostly depend on opex, depreciation, and impairments.

By now, analysts do not believe Hess can turn a profit in 2020 even despite middle-double-digit production and low-double-digit revenue growth on the back of the Liza Destiny FPSO start-up and ramp-up. 2021 will likely be the first year when Hess will ultimately report positive accounting profit.

Unfortunately, net operating cash flow dropped to the lowest level compared to both Q3 2019 and Q4 2018. However, OCF unadjusted for working capital movements decreased only slightly to $522 million. So, the disappointing net CFFO was precipitated by working capital change.

Full-year net CFFO dipped to $1.6 billion compared to $1.94 billion in 2018. The figure transforms into Cash Return on Total Capital, the metric I frequently use when assessing capital efficiency, of only 9.6%, which is not perfect but acceptable.

Additions to PP&E of the E&P and Midstream segments equaled to $2.83 billion, and, surely, this hefty amount was barely covered by cash from operations. Hess’s FCF to Equity remained sub-zero even after it managed to scale 2019 capital and exploratory expenditures back thanks to disciplined project execution. There is also a high possibility that in 2020, the company will still be FCF negative as E&P capex and exploratory expenditures are anticipated (see page 1) to reach around $3 billion this year.

At the same time, the cash pile is shrinking, and total debt is creeping higher.

Exploration & production companies Apache Corporation (APA) and Murphy Oil Corporation (MUR) still lag behind their closest peer Hess regarding multiples. Even after the recent correction, debt and equity investors pay ~$8.3 per $1 of Hess’s 2020 estimated EBITDA, while MUR is trading at ~3.9x Forward EV/EBITDA and APA at ~5.5x.

By and large, Hess is on track to achieve its production, revenue, and cash flow targets. The company is at the very beginning of its 2020s’ transformative path supported by growing resources of the Stabroek Block.

It is crucial to understand that investors who buy HES pay for prospects and expectations, as the company’s current performance is decent but not spectacular. By now, there are no profits, and free cash flow is sub-zero. But in the 2020s, revenue bolstered by the Guyanese oil will gallop ahead potentiating EPS growth and robust FCF.

In 2019, my primary concern was a too high premium that the market paid for HES. By now, after sharp correction, HES is still not a value stock, but its price-performance prospects have become much brighter. As the share price slid, now I have more confidence Hess might be worth considering. I upgrade my short-term sentiment to bullish.

Also, the trade war concerns eased, but the coronavirus risk is rattling the markets. There is no clarity when it reaches a plateau and hence how severe will be the economic consequences. That is worth bearing in might when pondering investments in the energy sector stocks.