My Seeking Alpha colleague wrote a brilliant article about how the growing consumption levels in China would affect the future of Alibaba Group (BABA). I fully agree that People’s Republic of China is a large industrial nation with plenty of growth potential. What’s more, I understand that this country is Alibaba’s key market. However, the company is a large multinational with some exposure to other countries and markets. Here, I’ll analyze the key international risks the online retailer is facing. I’ll also talk about Alibaba’s valuation.

Alibaba and its e-commerce in China

To start with, most of BABA’s revenue is due to Chinese e-commerce. That’s awesome. In comparison to many developed countries’ anemic growth, it seems China is flourishing right now. The phenomenon was clear even before the pandemic. But due to the fact that China managed to bring the coronavirus under control, the difference in economic growth between developed countries and China became even more striking.

For example, quite recently, very positive economic data from China were published. Industrial profits in this country have been growing for four months already. In August, they surged by 19% after a 20% rise in July.

So, it seems clear that Alibaba stands here to benefit.

As you can see from the graph above, Alibaba’s e-commerce sales in China are almost 10 times higher than its total international sales. What’s more, the total revenues have been growing at a very fast pace. 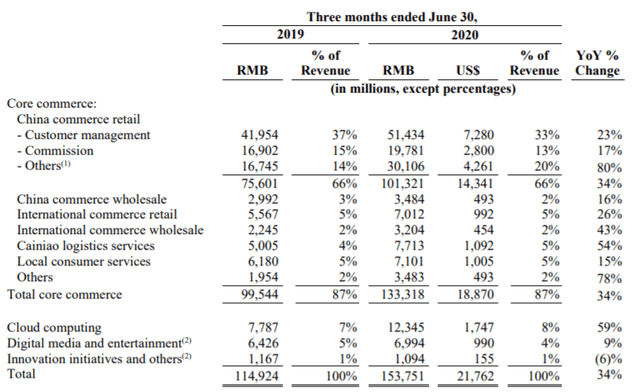 It seems, indeed, that China is immune to international challenges. However, it is not the case, unfortunately. Alibaba has plans to expand internationally. Some of its well-growing divisions are Lazada and Trendyol. What’s more, Alibaba has also been quite ambitious about its growth in India. All that is part of the company’s ambition to become an international e-commerce marketplace.

I do not think US tariffs have had such an obvious effect on Alibaba’s commerce. However, more worrying is the initiative to delist Chinese companies from the New York stock exchange. It is often argued that US investors will still be able to buy Chinese stocks. In the worst-case scenario, Alibaba and other Chinese companies will be listed on the Hong-Kong stock exchange.

That’s true. But some institutional investors (think of hedge funds and pension funds) might not be allowed to do so. That’s because they face stricter legal requirements.

We all remember the Luckin Coffee (OTCPK:LKNCY) corporate scandal. Investors were really shocked when they heard they could no longer rely on the company’s financial statements. Luckin’s directors misled their shareholders. The company’s sales revenues were, in fact, hundreds of millions lower than its directors claimed.

I don’t believe the same could happen to Alibaba. After all, Luckin Coffee was only established in 2017. Alibaba, in contrast, was founded in 1999. What’s more, Alibaba is a much larger company than Luckin. However, it raises doubts about the accounting standards in China and their transparency. In contrast to American companies, they don’t abide by the Sarbanes and Oxley act.

To be quite honest with you, the more I look at some high-tech companies’ valuations, the more I think about the dot-com bubble. In spite of the coronavirus pandemic and the overall economic and political uncertainty, the US stock indices are close to their all-time highs.

Online retailers have by no means been exceptions. Many of them trade at unbelievable price-to-earnings (P/E) ratios. Let’s have a look at a few such businesses and compare these to Alibaba stock.

I chose some of Alibaba’s closest competitors in the US.

I did not just include pure e-commerce companies. I also added Walmart’s (WMT) P/E ratio history. Walmart is rather known as a large traditional hypermarket chain. So, it might be less glamorous for investors. That’s why it is not so expensive, I think.

As you can see, BABA is less of a bargain than eBay (EBAY), but nowhere near as costly as Amazon (NASDAQ:AMZN). eBay, it seems, is not so popular among investors because many of them think it has totally lost its market share to Amazon.

Overall, Alibaba is reasonably valued compared to many US online retailers.

Even if you look at Alibaba stock valuation history alone, it still looks like a bargain in spite of its recent price rally. In fact, its P/E ratio is near-record lows.

Now, you might be wondering why I decided to get rid of my entire stake at Alibaba. Well, this is mainly because of the high level of uncertainty surrounding the coronavirus pandemic, the US-China relations and Chinese companies’ accounting standards. At the same time, in spite of Alibaba’s leading position in China, its overall business soundness and humble valuation, the broader stock market seems to be overvalued. I’d buy Alibaba stock at every significant correction, of course. But I’d like to have some spare cash now that volatility is highly likely ahead.