You would be hard-pressed to find a better-performing company over the last thirty years than HEICO (Heico) (NYSE:HEI). The aircraft parts maker has been a true beneficiary of the growth of commercial air travel over this time period.

It is a true rarity to find a company that compounds earnings at 19% over such a long time period. The question is whether investors are getting a chance to buy shares at a discounted level due to pandemic-related concerns. 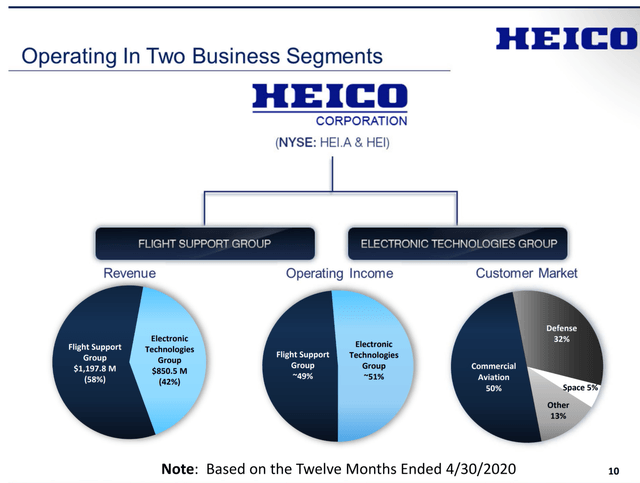 Breaking down the results by group paints a clearer picture. The Flight Support Group experienced a big drop in Q3 net sales to $178.2 million from $320.0 million. On the other hand, the Electronic Technologies Group increased its operating income by 2% to a record $184.9 million for the first nine months of fiscal 2020, while keeping it steady at $61.9 million for the third quarter of fiscal 2020.

President Eric Mendelson noted that it appears that business might have bottomed in June.

We were – back in May, when we said we were hopeful that May would mark the bottom, in fact, May was the bottom, and we were able to bounce nicely off of the May numbers into June and July. And I would say they were sort of consistent in that level. In terms of reviewing the businesses within the parts side, of course, we’ve got the PMA and we’ve got the distribution, and I would say that they were down sort of in the similar area. Repair was down a little bit more and that was to be expected as airlines we anticipated would reduce whatever expenditures that they saw.”

We have no significant debt maturities until fiscal 2023, and we plan to utilize our financial flexibility to aggressively pursue high-quality acquisitions to accelerate growth and maximize shareholder returns. I do want to point out that unlike some companies in the aerospace industry, HEICO did not have to go to the market to raise money at what I consider exorbitant rates of 8% or more. So we just went through this financially sound and I think that has really helped us and has proven to be an excellent strategy.”

As with any travel-related company, the first question is whether the company will survive to see the light at the end of the tunnel which may be in 2022. Heico should remain cash-flow positive as an overall entity due to the fact that half of the business is not exposed to commercial aircraft.

Heico has never been a “cheap” stock. A company that compounds earnings at close to 20% a year rarely trades at a discounted valuation.

The current market cap is $13.2 billion. As mentioned previously, the company is conservatively financed with a low debt load.

The Price to Sales ratio is 7.4X which is actually lower than years past where the company often traded at over 10X sales.

Many investors would be taken aback by the Forward PE of 48.3X. The company is expected to earn ~$2.15 in each of the next two years. Thus, the PE ratio is not coming down any time soon. However, a year or two of earnings does not mean much when analyzing the value of a company. If Heico is able to normalize operations in 2022 and continue growing at about 20% per year, the PE ratio is relatively meaningless.

Heico will most likely emerge from the pandemic in a stronger competitive position. The company is conservatively financed and will most likely use its balance sheet strength to acquire smaller suppliers. If investors can look past the next two years of earnings which should flatline, Heico shareholders should be richly rewarded as operations normalize and the company continues its growth trajectory.