I assign a “Bullish” rating to Korea-listed bank Hana Financial Group, Inc. (OTC:HNFGF) [086790:KS]. Hana Financial’s valuations are undemanding, and the re-rating catalysts are a further diversification into non-banking businesses and overseas markets, and a positive change in Hana Financial’s shareholder return policy, such as a higher dividend payout ratio.

Readers are advised to trade in Hana Financial Group shares listed on the Korea Exchange with the ticker 086790:KS where average daily trading value for the past three months exceeds $20 million and market capitalization is above $8 billion. Investors can invest in key Asian stock markets either using U.S. brokers with international coverage such as Interactive Brokers, Fidelity, Charles Schwab, or local brokers operating in their respective domestic markets.

Started in 1971 as South Korea’s first financial company, Korea Investment & Finance was converted into a commercial bank and renamed as Hana Bank in 1991. A financial holding company called Hana Financial Group was established in 2005, which owned Hana Bank and other financial businesses relating to securities, insurance and credit cards etc. In 2015, Hana Bank was merged with Korea Exchange Bank to create KEB Hana Bank. 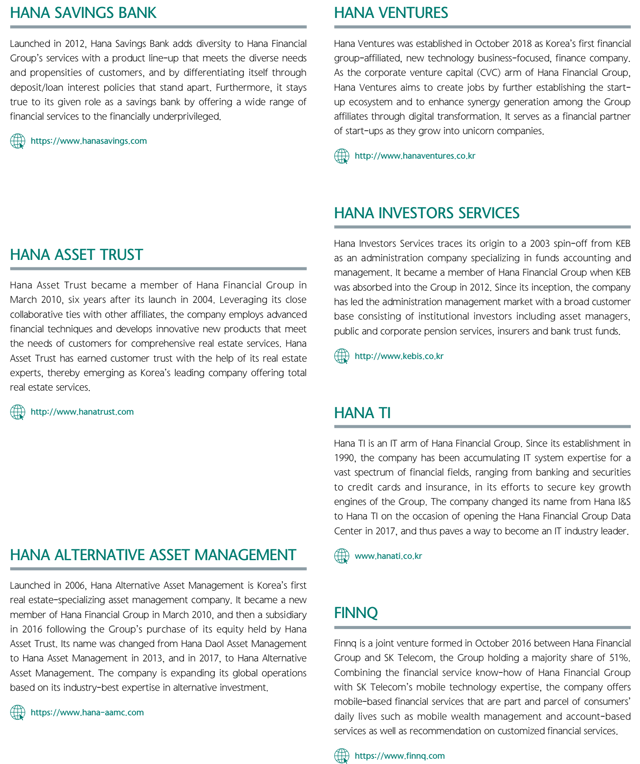 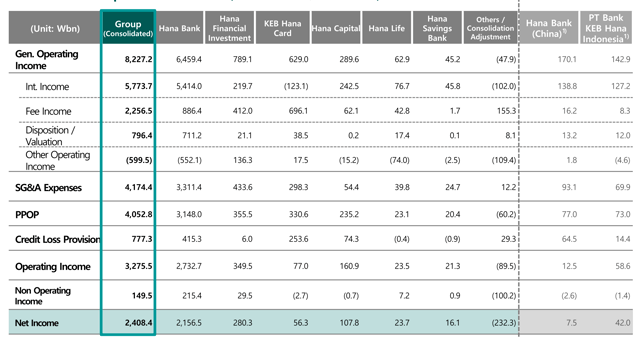 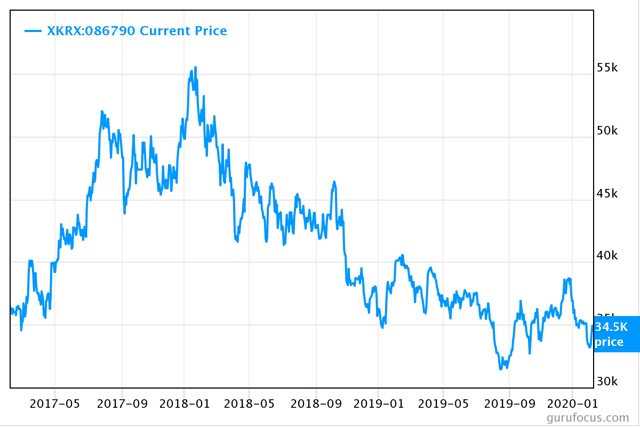 Hana Financial’s share price weakness and market expectations of declining ROE in the next two years are attributable to multiple concerns regarding the bank’s domestic banking business.

Firstly, South Korea’s central bank cut its benchmark interest rate by -25 basis points to 1.25% in October 2019, which was the second rate cut in 2019 and represents a 20-year historical low as per the chart below. There are concerns that South Korea’s benchmark interest rate could further trend downwards towards zero over time, as seen with other developed countries and markets. 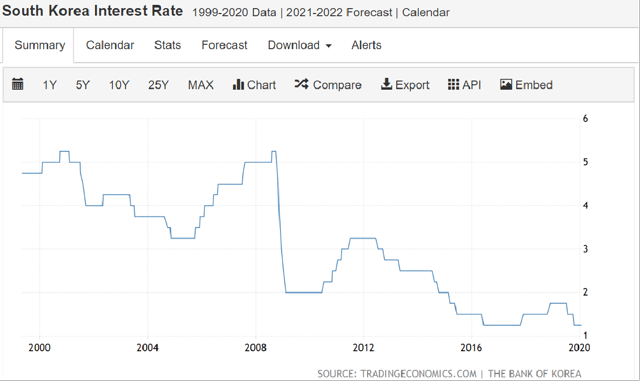 On the positive side of things, South Korea’s central bank maintained the benchmark interest rate at 1.25% at the recent policy meeting in January 2020. Bank of Korea governor Lee Ju-yeol told the media in January 2020 that “we do not wish to consider interest rate in the zero percent range.” Capital outflows, an intention to curb speculation in the country’s housing market, expectations of a potential economic recovery in 2020 were among the factors that South Korea’s central bank considered in maintaining the benchmark rate at 1.25%, rather than doing a further rate cut. However, five of the seven Bank of Korea board members have their terms expiring this year, so a change in policy direction can’t be ruled out.

Secondly, South Korea’s economy has slowed considerably in 2019 as per the chart below, and domestic banks are typically a proxy for their countries’ economic growth. South Korea’s GDP growth of +2.0% for 2019 is the slowest pace of growth for the country since 2009 during the Global Financial Crisis. The Organization for Economic Cooperation and Development or OECD expects South Korea to achieve GDP growth rates of +2.5% and +2.4% for 2020 and 2021 respectively.

Thirdly, banks are perceived as public utilities in South Korea serving the nation’s interest. In an article titled “Fiscal Instability” published on November 11, 2019 in local media The Korea Herald, it was highlighted that the current Korean administration should “stop pursuing tax-fueled growth and refrain from expanding what many economists criticize as populist welfare programs.” Another article titled “Moon’s populist politics and its effects” published on December 26, 2019 in the East Asia Forum attributed the current economic weakness in South Korea to the government “populist income-led growth policy.” Some of the populist measures introduced in South Korea include the implementation of a 52-hour work week in July 2019, and an increase in minimum wage by +10.9% and +16.4% in 2018 and 2019 respectively.

South Korean banks are also exposed to regulatory risks. In October 2019, it was reported that South Korea’s Financial Services Commission was considering new restrictions on banks’ sale of high-risk financial products to consumers. Earlier in February 2019, South Korea’s Financial Services Commission announced plans to compel banks to allow fintech companies to have access to their payment networks, which increases technological disruption risks for banks. South Korea’s 21st legislative election will take place on April 15, 2020., and there is uncertainty over the possibility of negative regulatory changes post-election.

As highlighted in the preceding section of this article, domestic South Korean banking businesses are discounted by investors due to concerns regarding interest rate cuts, weak economic growth and potential regulatory risks. In other words, a valuation re-rating for South Korean financial companies like Hana Financial is dependent on their diversification efforts into non-banking businesses and overseas markets.

In February 2018, Hana Financial acquired the remaining 49.87% stake in its consumer finance arm, Hana Capital Co. Ltd., to have 100% ownership of the company. In January 2020, Hana Financial announced that the company is acquiring a 70% equity interest in The-K Non-Life Insurance, primarily engaged in car insurance, from the Korea Teachers Credit Union, for KRW70 billion. The acquisition of The-K Non-Life Insurance is significant for two reasons. Firstly, this is the first major merger & acquisition for Hana Financial since the acquisition of Korea Exchange Bank in 2012. Secondly, this represents a key milestone for Hana Financial in moving towards its medium-term target of having non-banking businesses contributing 30% of earnings by 2025.

Besides diversification into non-banking businesses and overseas markets, a positive change in Hana Financial’s shareholder return policy is another potential re-rating catalyst for the stock.

Hana Financial already stands out from its other banking and financial company peers in South Korea with its policy of paying dividends on a semi-annual basis; other companies typically pay dividends once a year. The company’s total dividend per share of KRW2,100 for FY2019 implies a dividend payout of 25.6%; if KRW300 billion in share buybacks last year were included, the company’s total shareholder return ratio for FY2019 was a decent 38.1%.

The key risk factors for Hana Financial are further headwinds for the company’s core domestic banking business, a failure to diversify into non-banking businesses & overseas markets, and lower-than-expected dividends in the future.