Gold prices gave back their Thursday gains in the Asia Pacific session but remained close to the week’s more-than seven-year highs, even as China took monetary measures aimed at mitigating the effects of the coronavirus outbreak on its economy.

China cut the prime rate on one-year loans by ten basis points to 4.05%, with the five-year loan rate cut by five basis points. The markets had expected this action and reaction was muted. Stocks in China and Australia managed to stay in the green however.

Still, gold demand remains firmly underpinned. The metal hit its highest price level since February 13 in Wednesday’s trade and has not retreated far since.

The gold market is likely to be left to watch the virus-related headlines for the remainder of the global session as the economic data schedule is sparsely filled.

Crude oil prices gained but were below their session highs as the European open loomed as the market mulled possible supply difficulties.

The coronavirus’ spread continues to overshadow prognoses for demand in the early part of this year, to be sure. However, conflict in Libya which has seen its ports and oilfields under blockade endures, while US sanctions on a subsidiary of Russia’s Rosneft will mean that more Venezuelan oil is barred from global markets.

Still, US inventory data showed a build of 14 million barrels in the week to February 14, hugely above the 2.5 million barrels expected, according to numbers from the American Petroleum Institute.

Prices are back into the monthly chart territory which marked the lower reaches of the highs made back between 2011 and 2013. The bulls have clawed back much of the long decline seen between October 1, 2012 and the lows of December 2015, with the steep falls seen in February 2013 now barring the way higher. That month’s opening point was $1658.47 and that now appears as near-term resistance. Support looks firm in the $1500 area from the last four months of 2019, before the coronavirus story hit. 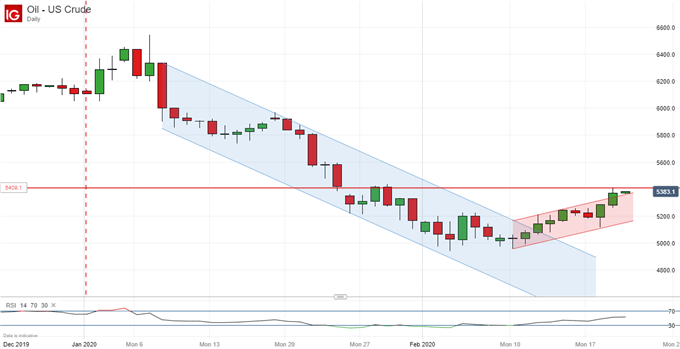 US crude prices are currently challenging the upper boundary of their most recent daily chart uptrend having managed a daily close just above it on Wednesday and to hold above the line so far in Thursday’s trade. The market still appears meaningfully capped by the high of January 28, although it looks as though it will face a serious challenge in the coming days. Coming in at $54.09 it’s very close to the current market, with an enduring close above that point set to put the bulls focus on the $55 region and above.