Gold prices were slightly higher in Thursday’s Asia Pacific session as the markets looked ahead with some trepidation to the weekly count of US unemployment-benefit claimants, bolstered by millions in the past two releases as coronavirus-linked shutdowns take their toll.

There was also some optimism in the market that global infection rates might be peaking but this remains a tentative hope at present.

The US Dollar inched lower overall, its strength having capped interest in Dollar-denominated gold products in recent sessions.

Crude oil prices slipped back, returning some of the gains made in advance of Thursday’s meeting of Organization of Petroleum Exporting Countries and allies including Russia, the so-called ‘OPEC Plus’ group.

The meeting is expected to be more fruitful than the March gathering at which failure to agree on production cuts sparked a bizarre price war, smashing prices already weakened by virus-related demand destruction. Hopes have been raised by reports that Russia was ready to cut its output by more than 1.5 million barrels per day, but doubts remain about the level of US participation.

Gold prices continue to respect the lower boundary of their daily-chart uptrend channel but they can’t seem to move very far away from it. Daily ranges are narrowing which suggests a degree of uncertainty about the near future and, while they retain control, bulls seem in no hurry to challenge the notable peaks of March.

If the bulls can’t select another gear the market seems likely to retrace and consolidate around the psychologically important $1600/ounce level. 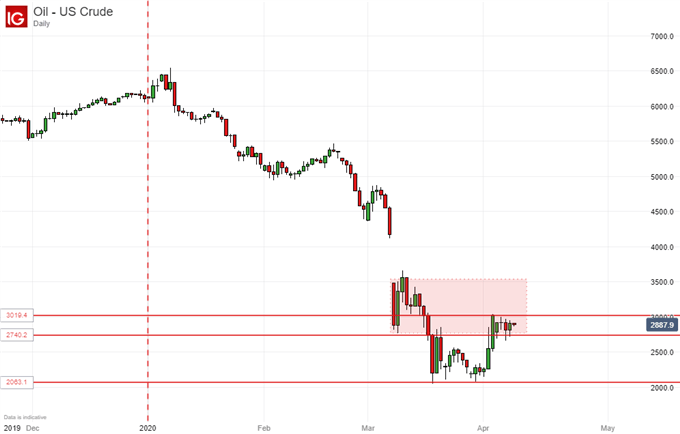 Prices remain confined to a narrow trading band within a broader potential range. Clearly much now depends on what happens with OPEC Plus. A deliverable agreement to reduce production could see the range top challenged near $35/barrel, although of course the market still faces significant uncertainty about demand even if supply can be reduced.

Disappointment will probably see the market back to its March lows in short order.