China’s death toll from the illness has reportedly hit 106, with 4,515 people infected with Reuters saying that Beijing has now seen its first death from the condition. The United States and Canada have joined the list of countries warning against travel to China.

Global markets are also gearing up for the US Federal Reserve’s first monetary policy decision of 2020 which is coming up on Thursday morning Asia Pacific time. Key rates are expected to remain on hold, indeed the market thinks they may not move at all this year and investors will be keen to gauge the extent to which the Fed might agree with that thesis.

Crude oil prices looked set for a sixth day of falls as investors tried to gauge the extent to which the virus will hit demand at a time when energy markets are well supplied, both by traditional producers and US frackers.

With the effects of 2003’s Severe Acute Respiratory Syndrome (SARS) on world ravel in mind, many forecasters are trying to model what effects coronavirus might have on the price of a barrel of crude. Barclays has reportedly said that they could trim $2/barrel from its current $62 average forecast for Brent and its $57 call for US crude.

The Organization of Petroleum Exporting Countries (OPEC) isn’t scheduled to meet again until March but, should signs that the outbreak is hitting global demand grow, speculation that production cuts could be deepened or extended will probably grow with it.

Assuming viral headlines permit, the market will look ahead to US durable goods order data due later in Tuesday’s global session, and weekly inventory numbers which are coming up on Wednesday.

Prices have topped their previous daily-chart range, but bulls have so far failed to push on back to early January’s significant highs.

The last three sessions have seen the narrow range between open and close which can indicate a rising degree of indecision in the market. However, while coronavirus stories dominate the headlines is seems highly unlikely that gold bears will be able to push matters too far. 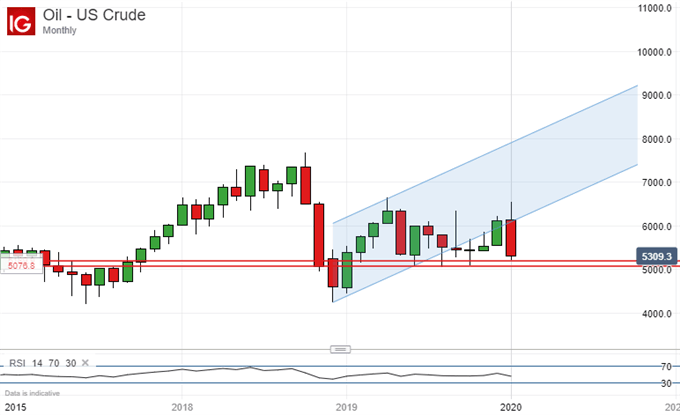 The toll taken on sentiment is abundantly clear from the monthly chart. Barring some astonishing, unforeseeable turnaround the market is set to end January well below the formerly dominant uptrend channel from late 2018.

Focus for February will then be on the lows of late 2019 in the $53.09 area, with the psychologically important $50 zone beckoning below. That level has not been seen since January of 2019 and a durable break below it would probably be taken as a very bearish signal, putting the market on high alert for action from producers.

RHJ/iStock via Getty Images Published on the Value Lab 27/6/22 Global X Uranium ETF (NYSEARCA:URA) is a good way to play a spot exposure on uranium and in turn to bet on nuclear energy. Nuclear […]

kparis/E+ via Getty Images This article was coproduced with Williams Equity Research (“WER”). As we noted in Part I of this series (available here), publicly traded asset managers are a unique sector. They tend to […]