Gold prices edged lower on Wednesday in a subdued Asia Pacific market session, but risk appetite remains quite fragile with investors keeping a close eye on headlines related to the spread of the coronavirus as the Chinese New Year travel season picks up and millions travel to, from and within the country where the virus first emerged.

Public health officials in China have reportedly confirmed more than 400 cases of the illness, evoking unavoidable memories of 2003’s outbreak of Severe Acute Respiratory Syndrome and the economic havoc that caused. Coronavirus cases are now confirmed in South Korea, Japan, Thailand, Taiwan and the United States.

Still, despite this news Asia Pacific stock markets managed to eke out modest gains, with this solid risk sentiment and a stronger Dollar both conspiring to weigh on gold prices. China’s gold consumption was reported to have fallen in 2019 for the first time in three years as high prices and a general economic slowdown hit private investor appetite.

Crude oil prices were lower too, with declines accelerating after the International Energy Agency forecast a global market surplus in the year’s first half despite ongoing output cuts from traditional producers. This helped to allay concerns about any supply constraints stemming from loss of production to conflict in Libya.

The rest of the global session offers few major economic pointers although Canadian inflation data and the Bank of Canada’s January monetary policy decision will keep markets interested. Base rates are expected to stay at 1.75%

Prices remain within the daily-chart range which has bounded trade since January 8 when prices retreated from the spike made in the aftermath of this month’s lethal US airstrike on Iranian General Quassem Suleimani.

The break of this range is likely to provide the market with a significant directional clue. However it remains notable that prices remain close to their recent highs, not previously been seen since May 2013, despite the relative strength of risk appetite seen this year.

Crude oil prices have at last slipped below the broad band of support which the bulls have defended on a daily closing bases since early January. 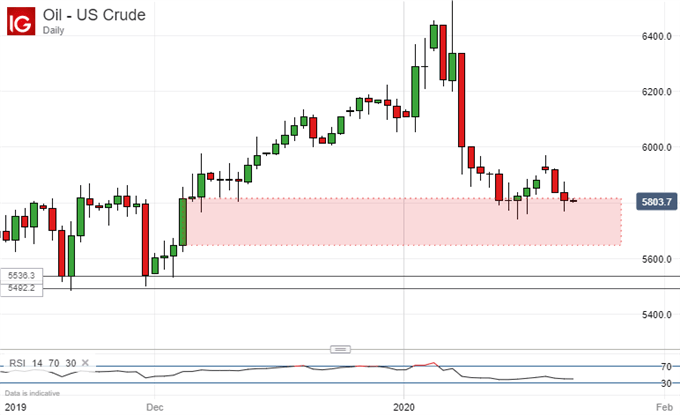 It comes in between the third and fourth Fibonacci retracements of the rise from October’s lows to this month’s peaks and, although it has yet to give way conclusively, the bears don’t seem to be giving up in their attempts to break back into it. With that in mind the closing levels seen for the remainder of this week could be instructive.

gjp311/iStock via Getty Images The iShares Global Infrastructure ETF (NASDAQ:IGF) has a lot of very solid companies with attractive end markets and economics that are reliable. Many interesting companies that we’ve looked at in the […]

undefined undefined/iStock via Getty Images AMD (NASDAQ:AMD) has been such a strong performer that Wall Street seems to be in disbelief. While the long term growth story of semiconductors remains unchallenged, consensus estimates are arguably […]