Gold prices continued higher on Thursday with the spread of coronavirus still capping risk appetite in the Asia Pacific region and across the world.

The US Federal Reserve left its monetary policy settings on hold on Wednesday but acknowledged the disease as a new risk. Anything likely to deter the world’s central banks from raising interest rates is likely to support gold, an asset which yields nothing and so generally does better in low rate environments. However, the US Dollar remains close to two-month highs against its major traded rivals, which may limit gold’s attraction to non-Dollar buyers.

The World Health Organization is due to reconvene later Thursday to decide whether the disease constitutes a global emergency. It’s previous decision not to so categorize it gave markets some fleeting relief earlier this week.

The broad market will look to official us growth data, coming up later, and the Bank of England’s January monetary policy decision. That central bank is expected to keep borrowing costs on hold but there has been plenty of chatter in the market about the possibility of a cut and the markets may well wait for the fact.

Crude oil prices slipped as the virus-related death toll in China climbed to 170 and more airlines cancelled flights into major Chinese cities. Reduced travel was one of the major energy-market hits dealt by 2003’s outbreak of Severe Acute Respiratory Syndrome and market memories are long.

News of another weekly rise in US stocks also weighed on the market in Asian hours.

According to the Energy Information Administration, crude stocks rose by 3.5 million barrels in the week to January 4, smashing forecasts of a 428,000 barrel rise. Gasoline inventory hit record highs, increasing for a twelfth week straight.

Prices remain close to the highs seen earlier this month but, despite the apparently supportive backdrop, there seems little appetite to regain them just yet.

Recent daily ranges have been quite small, which might suggest that the market is still suffering from a degree of indecision at these levels. However, prices remain above their previous trading range and, if they can continue to do so into this week and month’s end it could well be a bullish sign.

There are clues that a new higher range could be building, but they are hardly conclusive yet. If the market can stay above $1.563.31/ounce that could become a tentative range base, with this week’s high of $1589.27 acting as a putative top.

US crude oil prices are effectively back to the lows of 2019, but for the moment at least have bounced there. 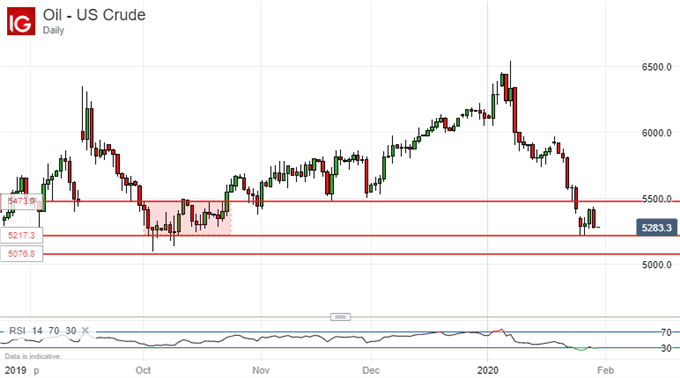 The market now seems to be stuck within a broad band which last bounced it on an intraday basis back in October last year. The range base has survived two tests this week, but it looks likely to face more. Should it give way there’ll be little between the market and the psychologically crucial $50 mark.

Maria Marganingsih/iStock via Getty Images Investment Summary As we look to diversify allocations across the broad healthcare spectrum, we have no choice but to rigorously analyze the beaten down pocket of the market. We recently […]