Gold prices pushed on to new seven-year highs on Tuesday as investors continued to fret about the global economic hit dealt by the coronavirus even as Chinese economic data came in less weakly than expected.

In US Dollar terms exports fell by 6.6% on the year in March, while imports slipped by 0.9%. This was in both cases much less than forecasts which centred on respective falls of 13.9% and 9.8%. While these numbers may suggest that supply chains are holding up better than economists had feared, it remains likely that the full extent of the demand collapse seen in western economies now to varying extents locked down has yet to show up in the data.

The US Congress struggled to come up with a new relief bill on Monday with the Republicans and Democrats in standoff. The budget deficit is now forecast to balloon and anxious eyes are being cast are the dawning corporate earnings season. Meanwhile the International Monetary Fund said on Monday that it would provide immediate relief to 25 member nations under its catastrophe relief program.

Given all of the above a continued strong haven bid into gold is unsurprising and, indeed can be clearly seen. The metal is now at its highest since November 2012, with its all-time peaks now in the bulls’ sights.

Crude oil prices rose as the prospect of reduced US shale-oil output added to the supportive effects of this week’s large production cut from the Organization of Petroleum Exporting Countries and allies including Russia.

The US Energy Administration said that April shale production may well see the biggest falls on record but even with these large prospective reductions in supply prices have failed to surge as investors still face the prospect of even greater falls in demand.

Gold prices have seen very sharp April gains as the supportive cocktail of general economic uncertainty and the lower interest rates set in place to deal with it gives the non-yielding metal a broad lift. 2020’s gains have been quite steep, however, and it may be that some consolidation will now be seen before the market can revisit the highs of October 2012 in the $1789/ounce region. As long as this process takes place above the psychologically important $1600 level it seems likely that upward momentum will be maintained. 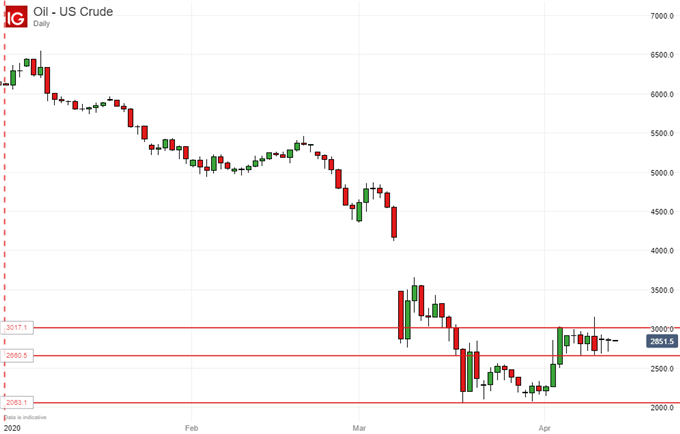 Crude oil prices’ inability to break above a narrow daily chart range in the face of supply reductions which would formerly have sent it soaring underlines the perceived economic threat of coronavirus very clearly.

Resistance in the $30/barrel area continues to cap the market while support from last week’s lows in the $28.51 region continues to hold. It seems certain that the direction in which this range eventually breaks on a daily-closing basis will be instructive, and at the moment a downside test looks more likely, perhaps as soon as this week. However the uncommitted may want to wait for confirmation of this.