Gold prices were a little lower in Friday’s Asia Pacific session, but they continue to hold up close to this year’s seven-year peaks as markets mull the likely impact of coronavirus’ spread as China’s President Xi Jinping declared a ‘people’s war’ against the disease.

While there are hopes that a vaccine against the Wuhan strain might be developed relatively quickly, and that in any case the disease seems less fatal than some of its predecessors, the contagion’s global footprint and death toll continue to rise, as does the economic disruption caused. To cite one clear example of this disruption, Italian car maker Fiat has said it might have to shutter a major European factory cite because of the virus’ effects on its Chinese parts-supply chain.

In this environment it seems unlikely that haven assets such as gold can have far to fall, but the short-term market will probably be dominated by the wait for official US payrolls data, due later on Friday, and China’s willingness to lift tariffs on some US goods. That was announced on Thursday but continues to support risk appetite.

Economists are looking for 160,000 new non-farm jobs for January. This would be a rather ‘so-so’ outcome but, given December’s lowball 145,000 rise anything close to or better than expectations might see a sigh of relief echo out across the markets, assuming virus-related headlines will permit. Recent US data releases have been quite positive, though, so hopes may be high that payroll forecasts can be topped.

Crude oil prices drifted lower very modestly through Friday, having risen into the session on reports that Russia would back production cuts in response to the virus-related hit to demand. Prices are already down by about 20% this year.

A panel advising the Organization of Petroleum Exporting Countries and its allies, led by Russia, suggested provisionally cutting output by 600,000 barrels per day according to a Reuters report on Thursday. Russian Foreign Minister Sergei Lavrov said that his country would support such a move.

Prices are once again challenging their trading range top but daily ranges remain quite narrow and impetus seems to lack conviction beyond the clear fact that no one seems to want to take the market much below its current, still-elevated levels.

Still, the market remains below both its range top and its previously dominant uptrend line. Bulls are going to have to top both if they’re going to have a try at last week’s peak of $1591/ounce. The looming daily and weekly closes are likely to be instructive with that target in mind, but even if prices retrace lower into their range, a downside break seems highly improbable while risk appetite is so prone to virus-related hits.

The prospect of lower interest rates for longer as a result of the outbreak won’t harm non-yielding gold much either.

US Crude Oil’s weekly chart clearly shows how prices have bounced in a band between the third and fourth Fibonacci retracements of the rise from December 2018 to April 2019. 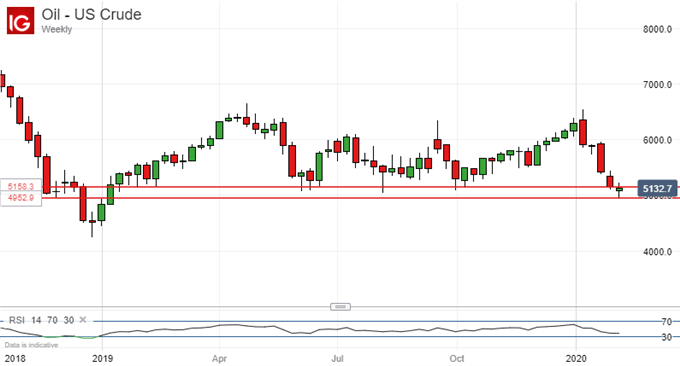 In a highly fundamentally driven market it seems unlikely that prices are going to slip much further while investors suspect that substantive production cuts could be coming quite soon, but it remains to be seen whether this week will see a bottoming out of 2020’s slide.

Reports suggest that so far reductions in energy demand as a result of coronavirus are largely confined to China. Should that change then downward pressure could resume even if output is reduced.

© Reuters By Peter Nurse     Investing.com — U.S. stocks are seen opening slightly lower Monday, starting the new week on a cautious note ahead of new economic data that could influence the Federal Reserve’s December […]