Central Banks were sellers of gold around the turn of the century, with the price of the precious metal below $300 per ounce. The Bank of England sold half of the United Kingdom’s gold reserves via an auction that pushed the price to a low of just over $250 in August 1999. After a double-bottom formation developed in 2001 at $255 per ounce, the price of the yellow metal that has dazzled humans for millennia took off on the upside. A decade later, in 2011, the price reached its all-time peak in US dollars at $1920.70.

Markets rarely move in a straight line, and there were plenty of corrections over the ten years it took for gold to move over seven and one-half times higher. The peak in 2011 lead to another correction that brought gold to a bottom of $1046.20 in late 2015. While gold corrected, it has not traded below $1000 per ounce since 2009. Gold had traded in a $331.30 range from 2014 until June 2019. When the price broke out to the upside, the next leg in the bull market that began in the early 2000s got underway.

The US Federal Reserve told markets to expect short and long term interest rates to decline in June when the central bank announced its intention to reduce the Fed Funds rate and end its balance sheet normalization program. The prospects for falling rates lifted gold over its July 2016 peak of $1377.50 per ounce.

The monthly chart highlights that gold broke out to the upside in June when it rose above the critical technical resistance level. As the Fed followed through on its guidance to reduce short-term rates and ended quantitative tightening starting on July 31, 2019, gold rose to a high of $1559.80 in early September. As tensions between the US and Iran rose to a boiling point in early 2020, the yellow metal reached a higher high of $1613.30 per ounce. Gold was trading at the $1580 level on Friday, February 14, above the September high.

The quarterly chart illustrates that the move above $1377.50 was the next leg to the upside in a bull market that began in the early 2000s. If the yellow metal settles above the $1520 level at the end of March, it will mark the sixth consecutive quarter of gains in the precious metal.

The latest correction was revealing

Since the January 8 peak, gold corrected as bull markets rarely move in a straight line.

The most recent correction in the gold futures market that took the price to a low of $1551.10 on February 5 sent gold just below the early September peak on the April contract. Since the June move above the resistance area on the long-term chart, gold never traded below the $1440 level. The resistance level surpassed in June has become critical support and continues to stand at $1377.50 per ounce. Corrections since September have kept the bullish pattern of higher lows intact.

The short-term daily chart displays that gold has been consolidating, and the recent correction has been healthy for the future of the bullish trend in the yellow metal.

The daily chart shows that price momentum and relative strength indicators have moved from overbought readings in early 2020 to near neutral territory as of February 14. Daily historical volatility rose from below 8% in late January to 10.86% as the daily trading ranges in the gold futures market have expanded.

Meanwhile, the total number of open long and short positions in the gold futures market declined from a record high of 798,822 contracts on January 23 to 674,073 contracts on February 13. The decline of 124,749 contracts or 15.6% likely reflects the risk-off period in markets across all asset classes because of the Coronavirus. A significant percentage of market participants exited risk positions, but the price of gold remains just above the September 2019 high. The decline in open interest is a sign that the current price consolidation period has cleaned out some of the weaker long positions from the gold market, leaving room for the market to move higher as it removed the bullish imbalance from the COMEX gold futures arena. Gold has moved into a neutral position, with the price over $200 above the current critical technical support level.

Buying dips has been the optimal strategy

Buying during periods of price weakness in the gold market has been the optimal approach to the yellow metal since the early 2000s. From 2014 through June 2019, the $331.30 range likely frustrated some market participants over the half-decade period who were looking for a higher high in gold. However, even during that period, purchasing gold during periods of price weakness was a profitable approach.

I continue to believe that buying gold on dips rather than on rallies will provide profitable results. The trend is always your best friend in markets, and the trading pattern in gold is higher. Central banks have been net buyers of gold over the past years, and that is likely to continue in 2020. China and Russia have been building reserves via accumulating domestic output. Both nations are significant producers of the precious metal, with China the world’s leader. At the same time, many other Central Banks have purchased gold to add to reserves. While gold did not rise to a new record high on US dollars and Swiss franc terms since the price moved higher after June 2019, but in most other currencies, gold reached all-time peaks. The rise in gold against all currency instruments is a sign of overall weakness in fiat foreign exchange instruments. With interest rates at low levels around the globe, the prospects for higher gold prices remain high. Therefore, corrective periods create an opportunity for purchases of the yellow metal.

UGL – Use double leverage on dips to build a physical position

The most direct route for a risk position in the gold market is via the physical bars and coins available from dealers around the world or via the futures and futures options offered on the COMEX division of the CME. There are more than a handful of ETF and ETN products that replicate the price action in the gold physical and futures market.

The ProShares Ultra Gold product provides a double leveraged exposure to the price of gold. The fund summary for UGL states:

The investment seeks daily investment results, before fees and expenses, that correspond to two times (2x) the daily performance of the Bloomberg Gold Subindex. The fund seeks to meet its investment objective by investing, under normal market conditions, in any one of, or combinations of, Financial Instruments (including swap agreements, futures contracts and forward contracts) based on the benchmark. The types and mix of Financial Instruments in which the fund invest may vary daily at the discretion of the Sponsor. It will not invest directly in any commodity.

The most recent top holdings of UGL include: 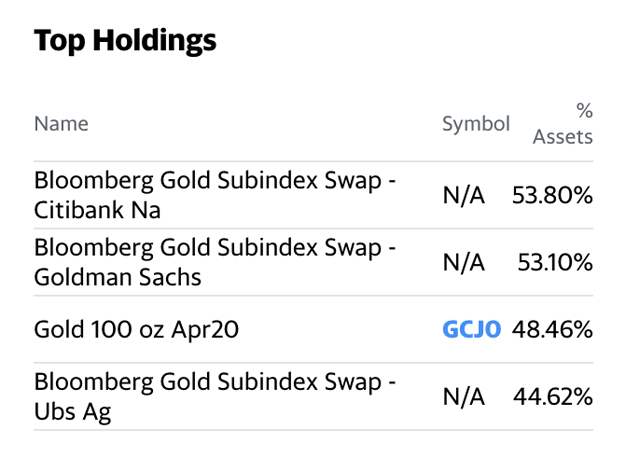 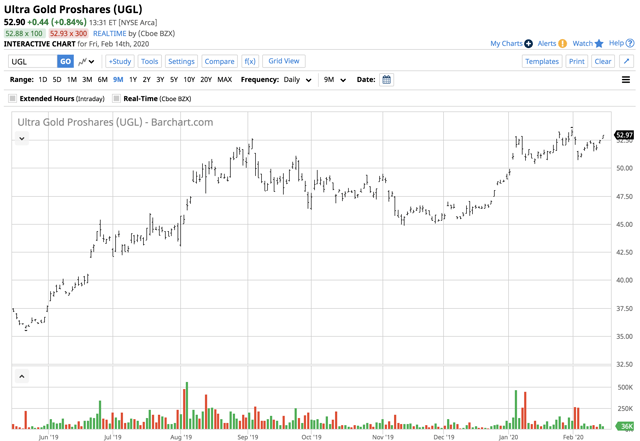 Over the same period, UGL rose from $50.38 to $53.43 per share or 6.05%. Gold futures trade around the clock, but the UGL product only is available during the hours when the US stock market is open for business. Therefore, the UGL product can miss sudden moves that occur during Asian or European trading hours. Moreover, the leverage in UGL comes at a price, which is time decay. UGL is only appropriate for short to medium term positions on the long side of the gold market. I favor products like UGL on dips, taking profits on rallies and investing the gains in physical metal or unleveraged ETF products or gold mining shares.

Each correction in gold over the past months and years have created buying opportunities. UGL is a tool that could turbocharge gains during corrections over the coming weeks and months as the price of gold continues to move to the upside.

The author is long gold

Vanit Janthra/iStock via Getty Images On November 28, INDUS Realty (NASDAQ:INDT) received a non-binding acquisition proposal from Centerbridge (which owns just under 15% of INDT shares outstanding) and GIC for $65 per share in cash. […]

BoC Hikes by 50 bps in Potentially its Final Hike The Bank of Canada’s Governing Council voted to raise the overnight rate by 50 basis points to 4.25%, where the rate could remain. The Bank […]