The overarching premise is simply the quantum leap in global money printing that will eventually result in the currency devaluation over time. The most likely beneficiary is gold.

Relative growth of base money creation among major countries will tend to determine the relative valuation of each currency. Since the money printing growth rate is highest in the US for the past 6 months, the value of US$ as expressed in the dollar index has become weaker.

The diagram below shows the shifts to the more advantageous assets if the dollar continues the slide by the monetary easing actions of the Fed. Generally, gold plus international bonds and stocks with rising currencies with no currency hedge are becoming the preferences.

My last article on Perpetual Profit Portfolio (PPP) is a new attempt to achieve consistent profits on all occasions; to hold only long assets which are on uptrends. The art of successful investing is much about differentiating the relative performances of assets. The chosen candidates are 16 dissimilar ETF assets which represent the global bond and stock markets. These assets are diverse and polarized so that at least one or more are gainful even in crisis, e.g. US$ or UUP is the lone asset that rose during the week of the liquidity crisis last March. From the 16 candidates, the normal upper and lower number of holdings in PPP are set at 11 and 4 to satisfy diversification and selectivity.

The flattening chart below takes the global asset curves to be divided by the daily averages, for the sake of relative performance visual. The idea is for easier comparisons to observe the rotational changes. The average curve in black also splits the above average assets and the below average assets for the past 16 months. Because of the built-in inverse relationships of the assets, the gains in some are at the expense of others so that the relative strengths are apparent. These serve as data input for further processing to obtain clearer outcomes. 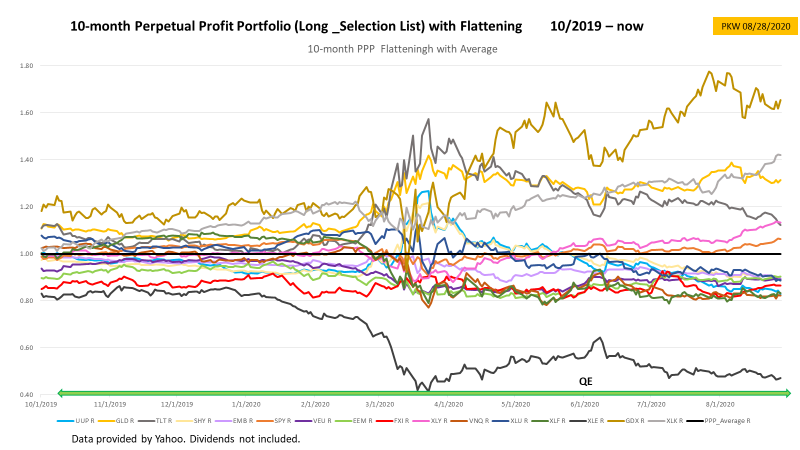 The next chart quantifies the changes of price and momentum for each asset in the past month. The summation of these price and momentum numbers is used as inputs for the ranking. The process is a rudimentary form of quant and artificial intelligence for investment purpose. The process can be expanded by adding more steps for further sophistication. The concept is to apply data processing towards automated decision making.

The results show the effective changes of leadership by ranking among the assets. This extra information can aid decision making. For example, GDX, the best performer from the start 16 months ago, displayed a 2-week trading cycle according to the relative ranking of assets.

The risk-off vs. risk-on sums chart below shows the movement of each sum for 16 months. Each of the sums contains an average of 8 individual assets. The risk-off list comprises UUP, GLD, TLT, SHY, EMB, XLU, VNQ and GDX. The risk-on sum includes SPY, VEU, EEM, FXI, XLY, XLE, XLF and XLK. The size and contents of the sums can alter through time. Although the assets are dissimilar, the sums achieve a remarkable correlation index of -1.000.

Risk-off and risk-on sums are showing the first sign of transition, after the strong performance of the risk-on sum especially for the past 6 weeks. We can use established technical tools such as trend lines to define the uptrends and reversal points. If we identify the prevailing trends and trade accordingly, perpetual profits are possible. 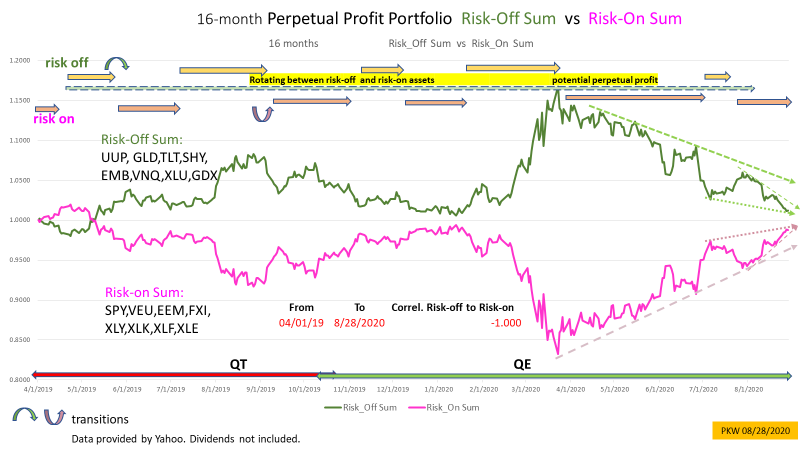 Gold as the main theme

The chart below illustrates the two major asset classes TLT and SPY. $TLT, UUP*TLT in gray color, represents the real value of TLT by including the value of the dollar index as UUP. $SPY is in beige. The curves were normalized and then divided by the average of the major assets so that they rotate around each other for easier visual. The 4 major assets include US$ and gold (UUP & GLD).

Treasuries should be treated as US$ as interest rates are falling to zero. But treasuries have more duration risks as the terms lengthen. All these assets are subjected to the devaluation of the dollar as well. The few remaining reasons for holding treasuries are liquidity and hedging against stocks.

$TLT is polarized with $SPY, which is potentially at the peak of the 2-month uptrend as evidence of the success of the Fed to reflate the stock markets by providing ample liquidity. 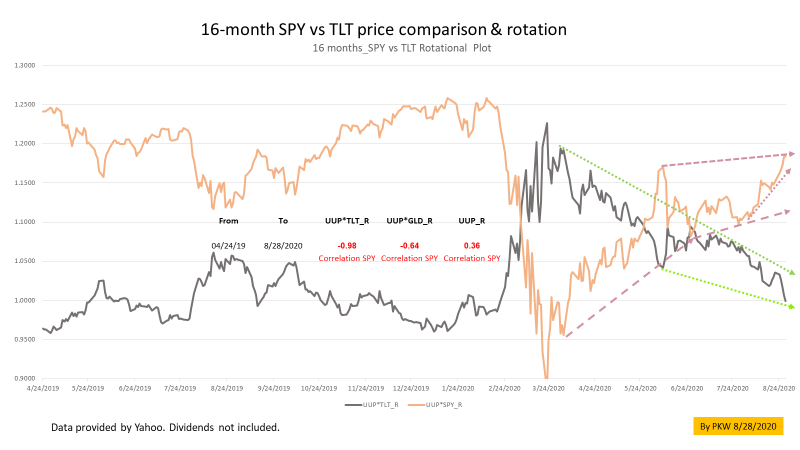 The same process above is expanded to gold and US$ as indicated by $GLD and UUP. $Gold rose steadily for the past 6 months. $SPY performed the best in last 4 months, but below the February peak because of the division by the average of the 4 major assets. Both UUP and $TLT were sliding because of the large amount of money printing. This chart is used to reveal the relative performance among the 4 major asset classes. 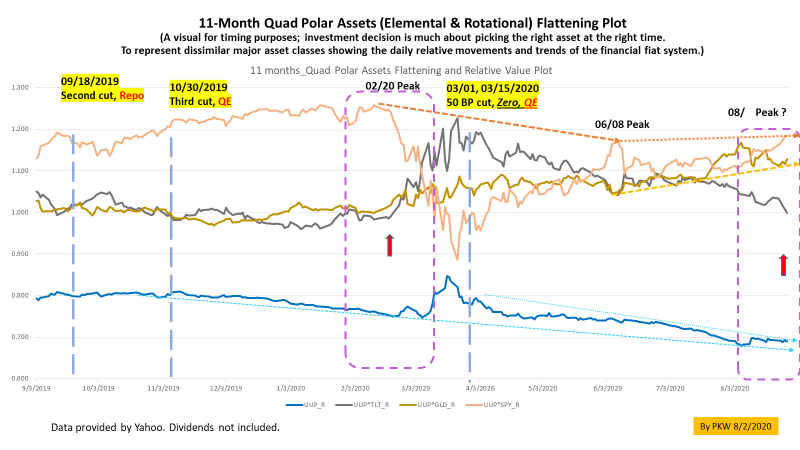 Converting other financial assets in the gold space, divided by gold, reveals a different performance perspective of each asset. UUP/GLD has been sliding downward since 10/2019 after quantitative easing was launched. The only interruption was the 2-week spike of UUP in March which was the liquidity crisis when the dollar was king. TLT/GLD in gray dips about the same as UUP/GLD for the past 4 months. Even SPY/GLD is lowered than the 02/2020 peak mostly due to the strong rise in gold. This chart illustrates the superior performance of gold, reflecting the relative weakness of global currencies and other assets. 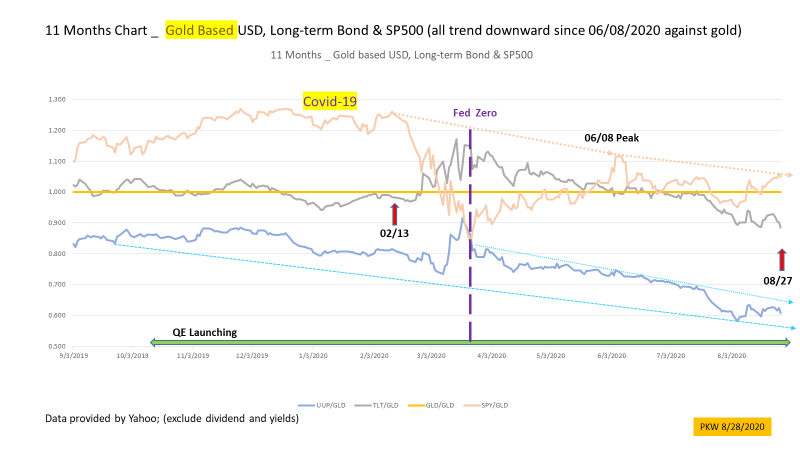 The 23-month gold basics composite indicator in the below chart is rising mainly because of the drop in the three-month LIBOR rate and UUP since March, despite the strong SPY. If stocks fall, gold will be even higher. The timing indicator has been quite accurate in signaling the entry points for gold. 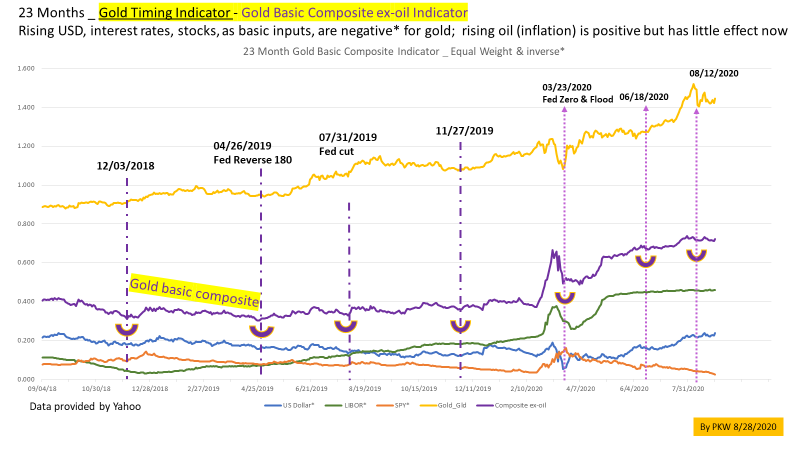 The miners have been one of the best performers for the last 7 months. With rising gold prices more than $500/ounce, the earnings are becoming more attractive. The silver miners awakened too since 06/2020. The outlook for the miners is excellent for the next year, but this sector is extremely sensitive to the stock market corrections such as the one in March. 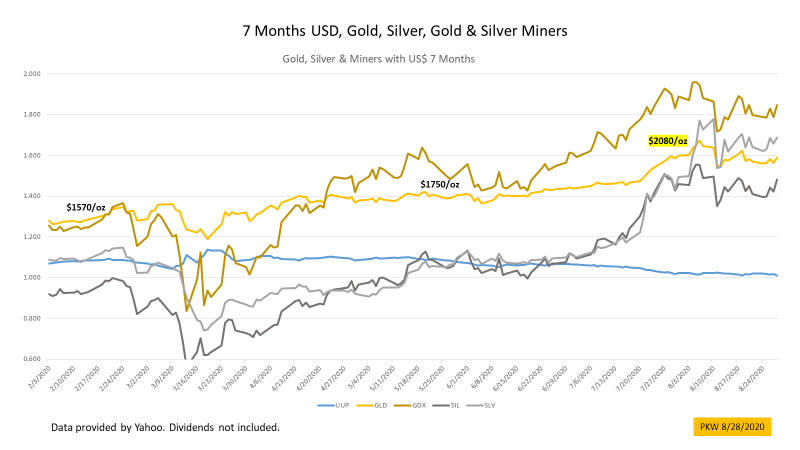 To regard gold as the main theme means to compare the performance of other assets against gold and use gold as default for savings. The above charts are used as tools to relate gold with other assets during times of global currency devaluation.

The biggest question for gold is when this rising trend will end. The short answer might be when the Fed slows money printing which is at least 2 years away.

Challenging times call for holding of the safest assets. Both physical gold and miners with improving earnings growth are becoming fashionable among the major players. My previous target price was broken 2 months earlier; the new target is $2200 by year end.

Disclosure: I am/we are long GLD. I wrote this article myself, and it expresses my own opinions. I am not receiving compensation for it. I have no business relationship with any company whose stock is mentioned in this article.