Glencore (OTCPK:GLCNF) is one of the world’s largest producers and traders of commodities with a specific focus on zinc, coal and copper. As the commodity sector has pretty much come to a standstill all over the world, Glencore’s share price has been slipping as well. The company has recently suspended its cash distributions, thereby disappointing income investors, but I think this could be a good moment to build up a position to establish exposure to some base metals and coal. Unfortunately I timed my put option in the Nest Egg Portfolio poorly and the portfolio was assigned to buy more Glencore at 230 pence, approximately 80% higher than where it is currently trading at.

GLCNF has its main listing on the London Stock Exchange with GLEN as its ticker symbol. With an average daily volume of approximately 50 million shares, the London listing is by far the most liquid one. One share of GLCNF represents one share of Glencore in London, so sophisticated parties with access to both exchanges could see some arbitrage opportunities.

Another useful read is Tim Worstall‘s view on the corruption investigation. In this article I won’t discuss the investigation (which is ongoing) as Tim’s article provides a good overview.

Although 2020 should be considered a lost year and it would be a success to generate even half the free cash flow Glencore generated in 2019, resulting in the 2019 results being useless, last year’s financial results do serve a purpose, as it provides us with a good idea of Glencore’s performance during “normal” times.

In 2019, Glencore generated a total revenue of $215B resulting in a gross income of $3.7B after deducting the $210.4B in costs related to goods that were sold. Glencore also had to record an impairment charge of $2.32B (approximately 50% higher compared to the impairment charge it had to record in FY 2018), which pushed the company’s pre-tax income into deep-red territory. With a pre-tax loss of $888M and a net loss of $1.51B, Glencore’s income statement looked embarrassingly weak. 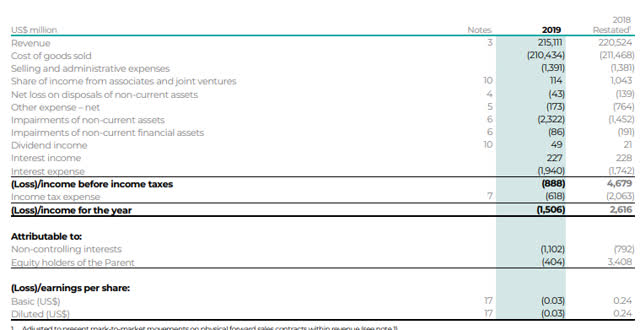 However, this is the consolidated income statement. As you can see in the image above, a majority of the loss was incurred by the non-controlling interests, and the loss attributable to shareholders of Glencore was just $404M. That’s still substantially worse than the net income of $3.41B in FY 2018, but at least it looks less dramatic than the headline net loss of $1.51B.

In my previous articles on Glencore, I always focused on the free cash flows as the cash flow is ultimately what determines a company’s ability to repay its debt and fund shareholders rewards like dividends and buybacks.

Glencore reported a total operating cash flow of $8.73B, but this included a rather hefty tax payment of $2.3B, whereas only $618M was due based on the 2019 results. The difference between the cash flow statement and the income statement is that the $2.3B in taxes paid also includes taxes over the preceding year. Looking at the balance sheet, you will see Glencore’s tax assets have slightly decreased (minus $250M), but its tax liabilities dropped by approximately $1.65B: 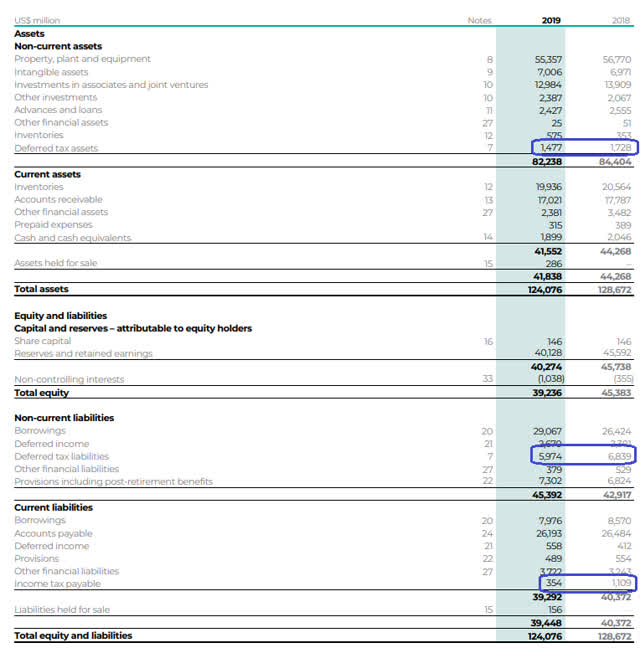 So adjusting for the difference between taxes paid and taxes due, the operating cash flow would be approximately $10.4B. We also need to add the $942M received as a dividend from investees and deduct the $358M in lease payments and the $305M in cash payments to non-controlling interests to determine the adjusted operating cash flow of Glencore at $8.7B before changes in the working capital position.

Glencore also spent a total of $4.7B on investments, resulting in a free cash flow of approximately $4B. That’s substantially higher than the net income and the difference can easily be explained. In FY 2019, Glencore reported a $7.16B depreciation expense and a $2.4B impairment charge (for total non-cash write-offs of around $9.55B), but only needed to invest $4.7B in its assets. The difference between the depreciation and capex is what drives the free cash flow. 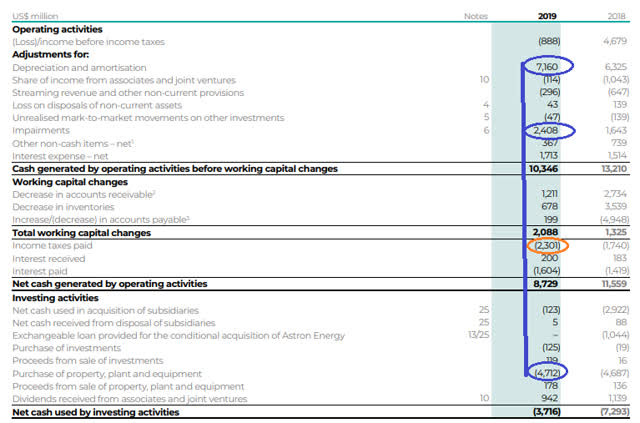 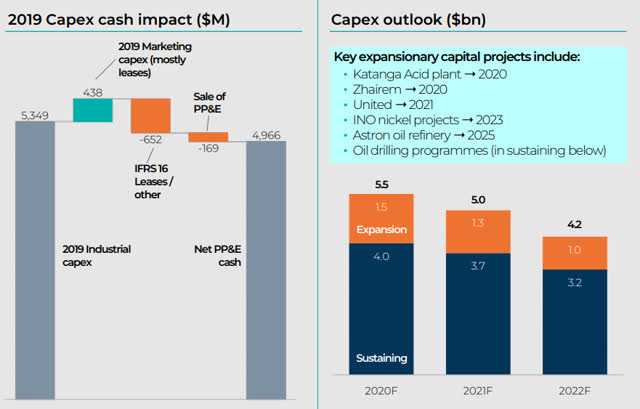 It’s impossible to provide a 2020 outlook at this time, but Glencore is working hard on remaining “investible”

Given the current volatility in the commodity markets, Glencore (nor any analyst) is currently not in a position to provide a guidance for this year. The copper and coal prices are all over the map; some mines will have to be shut down while others could be forced to remain open, as for instance the Zambian government is not impressed with Glencore’s plans to shut down a copper mine for the time being.

There are several external elements Glencore has no control over, but it does have control over its own financial situation. In a first step, Glencore has refinanced and extended some of its credit facilities. It signed an agreement with a consortium of banks which will provide a $9.98B revolving credit facility for a 12-Month period while it was also able to extend the maturity date of a $4.65B credit facility by five years (with the option to extend the maturity by an additional year). Important for Glencore: both credit facilities don’t contain any debt covenants, which provides additional flexibility to the company.

Glencore also decided to suspend its distributions (the company has been paying cash distributions that were deemed to be capital repayments which aren’t subject to withholding taxes), so technically we cannot call these payments a “dividend” and that’s why Glencore uses the word distribution. It’s better to be safe than sorry and the first 10 cent (US) distribution will keep approximately $1.3B in cash in Glencore’s bank account. Depending on how the situation evolves, Glencore may decide to pay the second distribution of US$0.10 in September if it thinks the situation warrants it. Should Glencore not pay any distribution this year, in excess of $2.5B will be kept in the bank account.

But based on the current share price of around 145 pence which represents $1.81/share (based on the current GBP/USD exchange rate), the distribution rate is now coming in at 11% (assuming that upon resuming the capital repayments, there will be no distribution cuts) and that makes Glencore an interesting investment to have exposure to copper, coal and zinc. If the situation worldwide continues to improve, there’s no reason why Glencore shouldn’t be able to achieve the cash flows it was able to generate before Covid-19 paralyzed the world economy.

Glencore still is a “must have” for any diversified portfolio as the company provides exposure to key commodities. The net loss in FY 2019 was a bummer, but as explained in this article, it continues to generate a massive amount of free cash flow – in normalized circumstances.

At this point, nobody really knows what 2020 will bring, but as soon as the situation reverses back to normal, Glencore should be able to continue to generate $4-5B per in free cash flow. $4.5B (the midpoint) divided by the 13.2B shares outstanding results in a free cash flow of $0.34 or 27 pence per share.

Don’t get me wrong. There is a 0% chance Glencore will generate $4B+ in free cash flow in 2020. But the current collapse provides an opportunity to acquire Glencore at just 5-6 times its free cash flow in normalized circumstances. I had a long position in Glencore and added on the dip at 157 and 129 pence to reduce my average purchase price.

Disclosure: I am/we are long GLCNF. I wrote this article myself, and it expresses my own opinions. I am not receiving compensation for it (other than from Seeking Alpha). I have no business relationship with any company whose stock is mentioned in this article.

EUR/USD This week we have two likely opposite scenarios in this pair. Favored Count The image presented below points towards the end of the downwards blood bath and resumption of the bullish trend. According to […]