General Mills (GIS) is one of the rare cases whose stock, instead of tanking during March’s selloff, actually rallied higher. During March, the company’s shares were trading relatively cheaply. As soon as the pandemic hit, the market became aware of the increasing demand for essential products, such as General Mills’ branded consumer foods.

Due to General Mills being an industry leader, owning some of the world’s most known brands, its shares resisted the overall market’s negative sentiment, which was pulling the major indices lower, as analysts started projecting stronger results.

This was indeed the case. In its Q4 results, General Mills recorded all-time high quarterly revenues of $5 billion, a 20.7% increase YoY. Despite delivering robust earnings during the pandemic, as well as consistent profitability over the past years, the company’s stock is currently trading at around the same levels it did five years ago.

As a result, in this article, we wanted to examine the company’s financial performance and valuation to assess whether investors should expect a more ambitious total return potential in the medium term or another, mostly flat, period of returns.

More specifically, in the article, we will:

By owning some of the most well-known brands globally, such as Cheerios, Häagen-Dazs, Natural Valley, and Pillsbury in the consumer staples sector, the company’s revenues are not subject to the overall market cyclicality. During the current pandemic, or during the Great Financial Crisis, for example, its sales increased. The company operates a defensive portfolio of everyday consumables, and therefore, steep variations in its sales are quite unlikely. 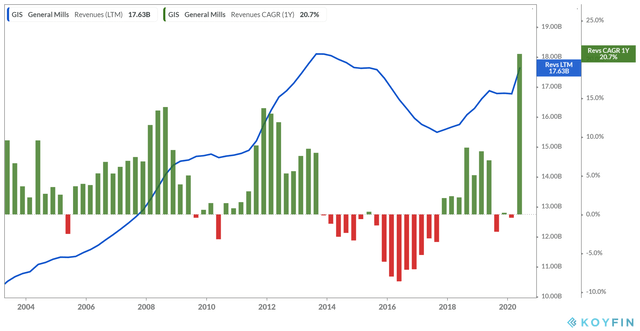 As a result of a predictable demand for its products, General Mills is able to deliver consistent profitability. In fact, for more than 25 years, the company has not posted a single quarterly loss. Further, even though its gross margins had been compressed in the past, due to the consumer staples market becoming increasingly more competitive, they have been quite stable over the past decade. Net income margins have also been quite consistent, usually staying in low-double digit levels. 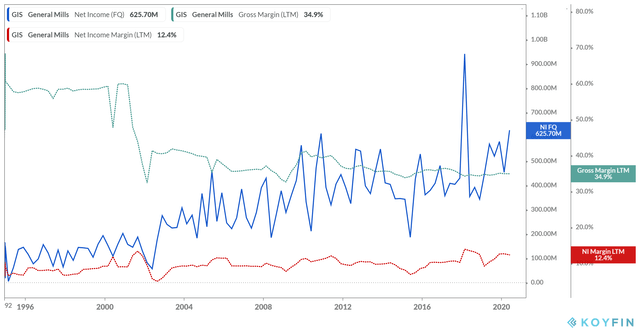 Based on the company’s ability to be consistently profitable, management has been able to return capital shareholders continuously, primarily through dividends.

Since its public listing back in 1980, General Mills has never cut its dividend, but only increased it or held it steady over the years. However, the company’s profitability may be consistent but not necessarily growing fast. As a result, management has been increasing the dividend when it seems prudent to do so, keeping a safe margin between EPS and DPS over the years to ensure the dividend’s safety. Even including the past couple of years in which the company has held the dividend safe, its 10-year DPS CAGR is currently around 7.4%, indicating an overall adequate dividend growth. 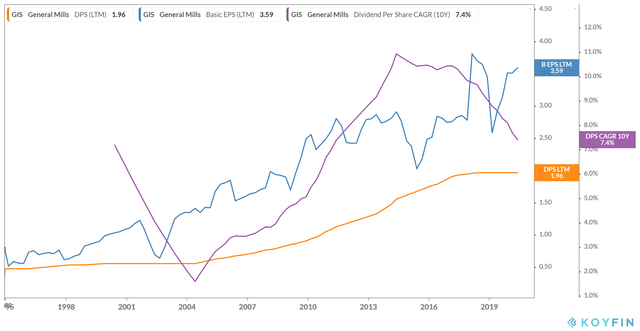 Due to acquiring Blue Buffalo, General Mills has frozen its dividend until it reduces its $10.3 billion debt load to a more comfortable level. In FY2019, interest expenses surged by 40% due to this acquisition, from $374 million to $522 million. Suspending dividend growth allowed the company to reduce its debt by $1.2 billion in FY2019 and $950 million in FY2020.

When it comes to its valuation, General Mills has historically traded at a P/E range in the mid-teens. Because of the predictability of its business model, the company attracts a narrow range of potential valuations. This makes it easier for us to assess an investor’s future returns, as we will display. 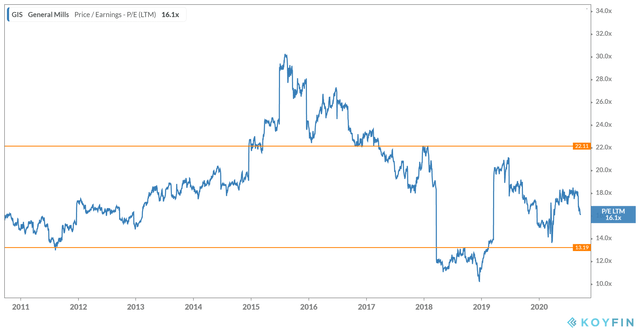 Now, to estimate the medium-term investor returns, we need a reasonable growth projection in terms of General Mills’ profitability. Analyst estimates remain quite consistent throughout the years, suggesting an EPS CAGR (compound annual growth rate) of around 6% through 2025. In order to be prudent, however, we are projecting this figure to be around 4% to price in the possibility of gross margins compressing, as retailers enjoy increased market power during challenging times. We are also estimating a DPS CAGR of around 4% as well, since the company usually maintains quite a healthy payout ratio, keeping distributions humble.

Based on these growth estimates, medium-term EPS and DPS are likely to look like the following: 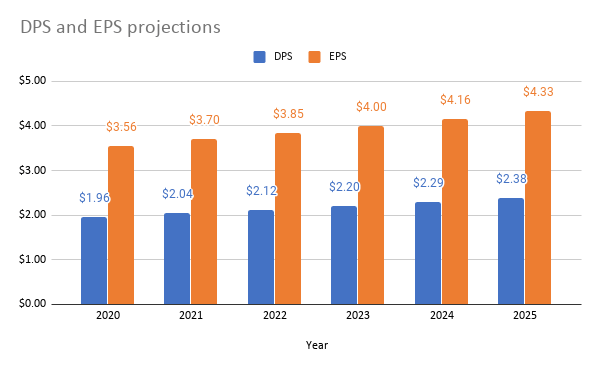 Now, by plugging in the stock’s current price ($57.55), our EPS and DPS growth rates, as well as different future potential valuations, we get the following possible annualized investor returns. As you can see, because of the stock’s narrow range of potential valuations, we can generate a table of somewhat predictable future returns. Assuming that shares trade between a multiple of 13-15 times earnings, investors are likely to enjoy total returns in the mid-single digits.

But is this good enough to get an investor currently involved?

Overall, General Mills’ investment case is quite mixed, and is mostly a matter of investor preferences, in our view. On the one hand, the company currently offers a decent, 3.42% dividend yield, which makes for a satisfactory stream of income, with the potential of moderately growing in the medium term. Further, investors are getting a reasonably priced company, with an annualized total return potential that could possibly reach the high single digits. Finally, shares appear to have a considerable margin of safety, and therefore, are very unlikely to generate negative total returns in the medium term. In that regard, General Mills could fit as a defensive, low-volatility investment with a very safe dividend for that extra income.

On the other hand, the stock offers limited returns in a massively competitive sector with razor-thin margins. If retailers were to push the sector’s margins down over time, the company’s profitability could potentially be compressed, restricting its future gains.

Therefore, while we appreciate the stock’s low volatility and stable return characteristics, we can’t really get excited about its total expected returns. Still, the stock could likely find a fitting spot in some more defensive portfolios.

3/3 © Reuters. A flag bearing the logo of Samsung flutters in front of its office building in Seoul 2/3 By Hyunjoo Jin and Joyce Lee (Reuters) – South Korea’s powerful Lee family faces a […]