Over the past few years, GE has had a difficult time growing revenue. The company has been hiving off assets which has made prior-year comparisons problematic. Management considers Aviation, Power Systems and Revewable Energy (NewCo) its core operations. In Q4, NewCo generated revenue of $19.1 billion, up 3% Y/Y. 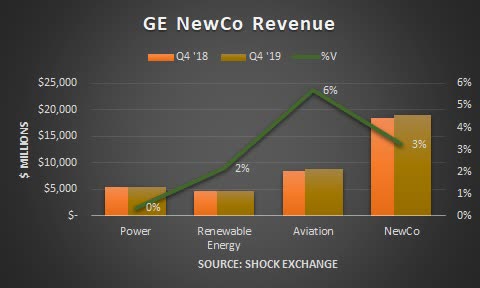 About 28% of total revenue was derived from Power, down from 29% in the year earlier period. Power has been a poor performer, yet revenue appears to have stabilized this quarter. The segment reported orders of $4.5 billion, down 30% Y/Y. Power Portfolio orders fell hard on the loss of a large order in Steam Power. Orders are now less than quarterly revenue, which could imply future revenue could fall.

Renewable Energy revenue rose in the low-single-digit percentage range. Orders fell in the double-digit percentage range due to a loss of repeat business for large deals in Hydro and Grid Solutions. Onshore Wind reported record deliveries. Renewable Energy is also important to the extent it allows GE to benefit from the shift from fossil fuel power to alternative energy sources.

Revenue from Aviation was up 6%, which followed an 8% rise last quarter. Equipment revenue rose 9%, driven by 420 LEAP-1A and 1-B units, while services revenue grew 4%. I expect revenue from military sales to remain strong, while revenue from the commercial segment could eventually falter. If the economy has peaked, then air travel and/or demand for planes could face headwinds. FedEx (FDX) has been grounding planes amid headwinds to its air network; the overall decline in the transportation sector could metastasize to Aviation at some point.

In Q3 2019, NewCo’s segment profit spiked 34% Y/Y. Heading into Q4, I expected a repeat performance, and GE delivered. NewCo reported segment profit of $2.2 billion, more than twice the $916 million reported in the year earlier period. The biggest driver was the $302 million segment profit at Power, up from -$786 million in Q4 2018. Cost take-outs helped, but there were charges that occurred last year that did not take place this quarter. Power will likely not show a $1.0 billion improvement in segment profits each quarter, but Q4’s positive performance cannot be ignored.

Aviation segment profit was $2.1 billion, up 19% Y/Y. Improved price and volume were partially offset by engine mix. Profit margin was 23%, up from 21% in Q3. The improved profit margin could allay fears about a loss of pricing power. The company is working with Boeing (BA) to help resolve issues pursuant to the 737 Max, but it did not have much impact in Q4. Aviation represented over 90% of NewCo’s segment profit; to imply NewCo is diversified would be a misnomer. NewCo is practically all Aviation at this point. If the economy has peaked, then there could be less opportunity for Aviation and NewCo to grow profits.

Investors have been keenly focused on GE’s free cash flow (“FCF”). This is important, as it gives clues to whether GE is capable of surviving. Management has cut the dividend, hived off assets and frozen pension benefits for employees. CEO Larry Culp is fighting to ensure the company’s survival and he should be commended for that. In Q4, industrial FCF was $3.9 billion, much higher than the $650 million reported in Q3:

“We generated Industrial free cash flow of $3.9 billion in the quarter and $2.3 billion for the full year. This came in ahead of our most recent outlook as Power outperformed expectations and we saw continued strength in Aviation.

As I reflect on the year, we’ve come a long way since my initial visit as CEO with each of the businesses in late 2018. Aviation and Healthcare are clearly exceptional franchises, delivering profitable growth for the year with runway to go.”

Solid FCF was a good thing. Continued strength in Aviation helped. Who really believes Aviation will grow stronger over the long term at this stage of the economic cycle? FCF could be used to pare GE’s $91 billion debt load. In my opinion, it still does not seem like future FCF is easy to predict. Rightsizing Power and growing Aviation could drive FCF in the short term, but these catalysts could dissipate over the long term. Sans asset sales, I doubt GE can deliver consistent FCF growth at this point in the economic cycle.

NewCo’s Q4 results were solid, particularly in comparison to dismal results from previous years. The Federal Reserve and policymakers have proven they can spike financial markets, yet, the economy and GE’s industrial businesses have likely peaked. Weak industrial production appears to support this thesis. Sell GE.

Disclosure: I am/we are short GE. I wrote this article myself, and it expresses my own opinions. I am not receiving compensation for it (other than from Seeking Alpha). I have no business relationship with any company whose stock is mentioned in this article.

© Reuters By Yasin Ebrahim Investing.com — The S&P 500 climbed Thursday, as stronger-than-expected quarterly results from retailers and a rally in tech put stocks on course to snap a seven-week losing streak. The rose […]