The British Pound and anti-risk Japanese Yen took the spot as the best-performing major currencies on Tuesday. GBP/USD received an upside boost after the UK unexpectedly added 208k employed positions in the period from September to November. Economists anticipated a 110k increase instead. That helped push local front-end government bond yields higher and cool near-term Bank of England easing bets.

Meanwhile, the Yen benefited amid a broad “risk-off” tone that sent stocks in Asia, Europe and in the United States mostly lower. Fears have been rising overnight after the World Health Organization declared an emergency meeting on the deadly outbreak of the coronavirus emanating from central China. This comes ahead of the Lunar New Year holiday and may discourage travelers, thus impacting a key source of revenue.

The pro-risk Australian Dollar and New Zealand Dollar depreciated as the S&P 500 and Dow Jones closed -0.27% and -0.52% on Tuesday respectively. The Centers for Disease Control and Prevention (CDC) confirmed that a patient in Washington State was reported with the virus. Sentiment-linked crude oil prices understandably aimed lower.

What is the road ahead for GBP in the first quarter?

S&P 500 futures are little changed heading into Wednesday’s Asia Pacific trading session. Netflix released their fourth-quarter earnings report which was mixed. First-quarter subscriber estimates missed expectations but revenue and earnings per share (EPS) surprised higher. Shares are now up about over 2% in after-hours trade and may help offset some of the pessimism in financial markets ahead. The focus for foreign exchange markets will likely remain on sentiment amid a rather sparse economic calendar docket.

GBP/USD appears to be confining within a Symmetrical Triangle chart pattern. This is typically a continuation formation which would entail the resumption of the trend that occurred in the lead-up to the triangle’s emergence. That may mean prolonging the uptrend from September towards 1.3284 and falling resistance from June 2015. This is in line with the bullish outlook from trader positioning at the time of this writing. 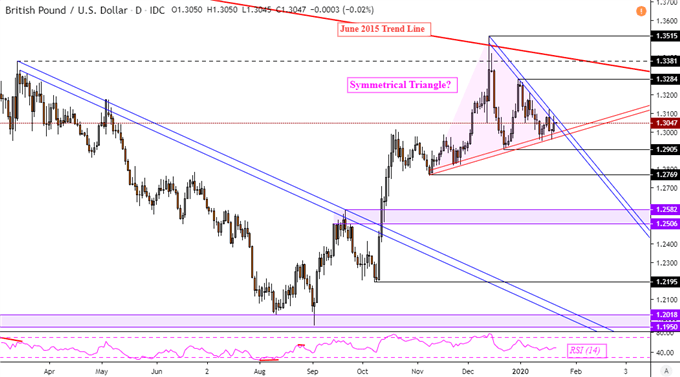