Despite the total number of confirmed coronavirus cases being reportedly above 42,000 with over 1,000 deaths, market mood was buoyant in Asia. APAC equities were mixed but mostly higher with the Australian and New Zealand Dollars clocking in modest gains against the anti-risk Japanese Yen. The bare data docket made traders more focused on broader fundamental themes ahead of key event risk in the next 24 hours.

Preliminary year-on-year UK GDP for the fourth quarter is expected to show a 0.8 percent print, notably lower than the prior 1.1 percent figure. Its quarter-on-quarter twin is anticipated to show no growth unlike the previous report which showed a 0.4 percent statistic. If markets see softer-than-expected data, it could stress GBP and Gilts if investors believe it will pressure the Bank of England to bring the timeline for easing closer.

Overnight index swaps are pricing in a better-than-even chance of a 25-basis point rate cut by the August meeting with the same instrument showing an overwhelming expectation of easing by December. At the last BoE meeting, the Monetary Policy Committee voted 7-2 to maintain interest rates at 0.75 percent and GBP rallied. However, looming concern about the coronavirus and Brexit may start inflaming dovish expectations.

Since November, economic data has been tending to underperform relative to economists’ expectations, but it has been showing signs of gradual improvement as analysts recalibrate their assessments. However, this is not unique to the UK. Globally, economic growth is showing signs of modest stabilization, but nevertheless remains vulnerable to shocks be they political or biological – like the coronavirus.

Fed Chairman Jerome Powell will be testifying to the House Financial Services Committee where he will speak about monetary policy. It is likely the Chairman will reiterate the Fed’s neutral position on interest rates, citing last week’s impressive NFP figures as proof that economic conditions do not warrant additional easing measures. Having said that, there are numerous risks Mr. Powell will likely cite that could derail growth.

For about three months, GBP/USD formed what appeared to be a continuation pattern known as a Symmetrical Triangle (ST) with the preceding uptrend suggesting an upside breakout was in the cards. However, bullish price action was rejected at resistance art 1.3212 and subsequently declined below the December swing-low at 1.2905. Selling pressure may start abating around 1.2816. 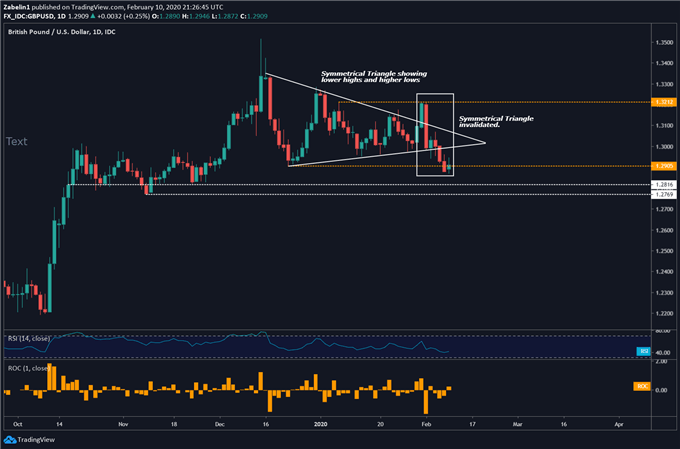 yanjf/iStock via Getty Images Overview The markets remain hopeful about a reopening in China and continue to pour into Chinese stocks on the mainland and Hong Kong. The index of Chinese companies that trade in […]