The poisoning of Russian opposition leader Alexei Navalny by the Russian establishment in late August might have negative consequences for Gazprom (OTCPK:OGZPY), as there are now talks inside the European Union about the possible dismantlement of the company’s Nord Stream 2 gas pipeline. However, the good news is that Gazprom has enough financial flexibility to stay afloat for the long term, even if it will be forced to abandon the project. In addition, with the backing of the Russian government, Gazprom’s stock should be considered a bargain at the current price, as the company has enough catalysts to drive growth in the long run. For that reason, we decided to increase our holdings in the company and have no plans to unwind our long position anytime soon.

Gazprom continues to be the largest gas producer around the globe and a major player in the European energy market. In addition, Gazprom has systemic importance to Russia, which owns the majority of the business, as the company is able to cover some portion of the country’s budget deficit through dividends.

In the last decade, Gazprom decided to diversify its gas transportation network and in 2011 it opened the Nord Stream 1 pipeline, which is located at the bottom of the Baltic Sea and connects Russia with Germany. The completion of the project helped Gazprom to minimize political risks since it no longer needed to transfer all of the European gas orders through Ukraine, which acts as a transit country. The project was a success and the company decided to fully cut out the middleman and started building the second pipeline Nord Stream 2, which was supposed to be completed last year. However, the project was delayed due to the intervention of the USA, which threatened Gazprom’s contractors with sanctions if they continue their work on the project. As a result, the Russian government decided to help Gazprom finish the project with its own resources and it currently expects to finish Nord Stream 2 in late 2020 or early 2021.

However, there’s a risk that the project will not be finished at all after the increasing number of EU leaders raised their concerns about the need to complete the project after the Russian opposition leader Alexei Navalny was poisoned by the Russian establishment earlier this year. While the German chancellor Angela Merkel said that she has no plans to abandon the project, there’s a number of countries inside Europe such as Poland and Ukraine that want to cancel the completion of the project. Just recently, Poland fined Gazprom for $7.6 billion for breaking antitrust laws. While Gazprom already said that it will appeal the decision of the Polish antitrust watchdog in the EU court, the ruling on the issue will take years. As more countries inside the EU want to diversify their gas streams and not rely too much on Gazprom for their supplies, we believe that the risk of Nord Stream 2 not being completed is much higher than it was before.

In addition to the delay and the possible cancelation of Nord Stream 2, which will have a material impact on the company’s financials, Gazprom is also suffering from the weak demand for natural gas in Europe, which brought the prices for gas and other commodities to the historically low levels. As a result, in Q2 Gazprom’s gas revenues declined by 34% Y/Y, while its oil revenues declined by 40% Y/Y and the company generated negative FCF. 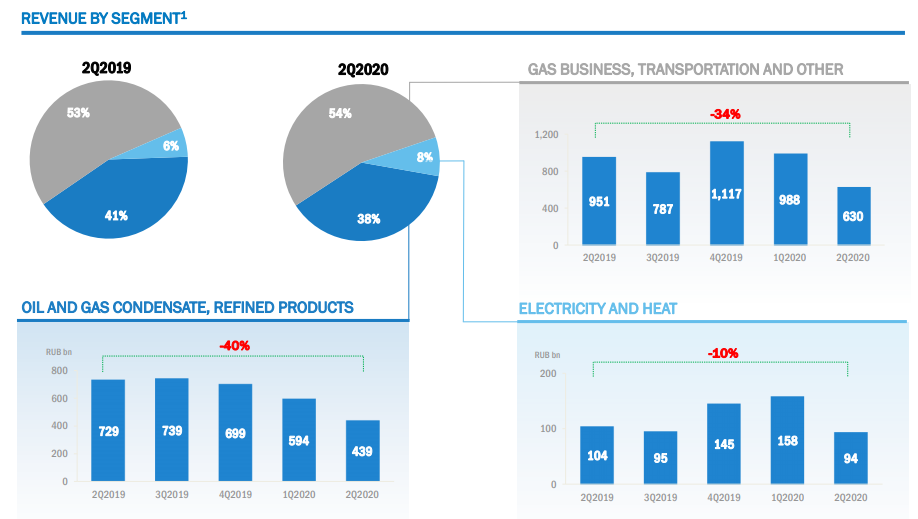 The good thing is that while Gazprom has a net debt/EBITDA ratio of 2.3x, the company’s interest coverage ratio is almost 8x, which suggests that the business has enough resources to service its debt without worrying about taking more losses or becoming insolvent. In addition, Gazprom has an investment-grade credit rating with a stable outlook from major rating agencies and as a result, the current low price environment for natural gas will not dramatically hurt its business in the long run. Also, after finishing a 2,466 miles Power of Siberia pipeline from Russia to China in Q4 2019, Gazprom dramatically cut its capital expenditures, which at the end of Q2 2020 were at Q4 2016 levels. 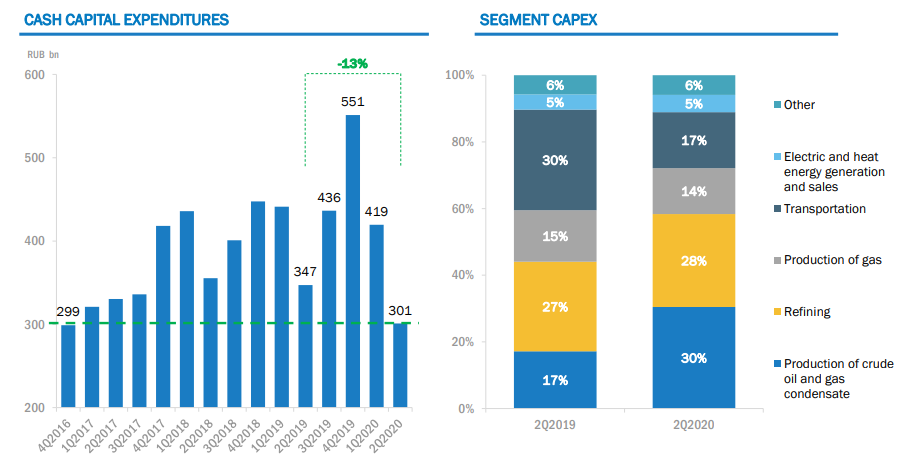 In addition, despite the decline in revenues, Gazprom is able to keep its margins in the positive territory, while the majority of its peers suffer immense losses in the current environment. Also, by trading at a forward P/E ratio of only 3.75x, which is below the industry’s forward P/E ratio of 17.12x, the company is undervalued and its stock is a bargain at the current price.

The biggest advantage of Gazprom is its low-cost pricing structure, which makes the company more competitive in comparison to other businesses from the energy field. At the current price levels, the production and transportation of LNG gas from the USA to Europe is unsustainable and as a result, lots of companies in the West already filed for bankruptcy due to the inability to make a profit. Considering this, we should expect Gazprom to increase its market share in Europe in the following months. Another good thing for Gazprom is that Nord Stream 1 continues to be fully operational and the company also signed a 5-year transit deal with Ukraine at the end of last year, which helped it to avoid paying $16 billion in damages to the Ukrainian state-owned oil and natural gas company Naftogaz. In addition, there’s a high chance that in the next decade Gazprom will be able to minimize its European risks, as there are already talks to build another pipeline to China, which is interested in buying more Russian gas.

Considering all of this, it seems that the downside is already priced in. Gazprom has enough financial resources to stay afloat even in this low-price environment and outlive its competition in the long run. In its latest presentation, Gazprom said that the gas market in Q3 started to recover Q/Q and the company is on track to achieve a 40% and 50% dividend payout ratio for 2020 and 2021, respectively. For that reason, we believe that Gazprom’s stock is a bargain at the current price and we’ve increased our long position in the company.

Disclosure: I am/we are long OGZPY. I wrote this article myself, and it expresses my own opinions. I am not receiving compensation for it (other than from Seeking Alpha). I have no business relationship with any company whose stock is mentioned in this article.

© Reuters. 2020 World Economic Forum in Davos By David Kirton SHENZHEN, China (Reuters) – Huawei founder Ren Zhengfei called on employees of its departing Honor subbrand to strive to surpass its parent in a […]