While Q2 was a quarter to remember for the Gold Juniors Index (GDXJ), Q3 was nowhere near as kind to the smaller explorers, with several of them more than 30% off of their August peaks. G2 Goldfields (OTC:LGDRF) was one of the hardest-hit names in the sector-wide slump, with the stock down 53% in Q3, and nearly 60% from its highs. The sudden plunge in the share price shouldn’t be surprising at all to investors, as the stock was a Tier-3 explorer trading at over $100 million pre-resource at its July peak. However, even after the 60% decline, there are still more compelling opportunities elsewhere in the sector, and I would expect more dilution in the next 12 months, given the current burn rate. Based on my expectation for further share dilution, and the fact that there are several trapped buyers overhead, I would view any rallies above $0.55 before year-end as selling opportunities. All figures are in US dollars unless otherwise noted.

Just over three months ago, I wrote on G2 Goldfields and warned that investors would be wise to take some profits above the $0.80 level. Not only was the company just coming off an extremely generous private placement with money raised at a 19% discount to the volume-weighted average price, but the valuation was becoming extravagant, with G2 Goldfields trading at a fully-diluted valuation of $115 million. Since that time, the stock has been cut in half, diving from a share price of $0.84 on July 6th to $0.36 in just 70 trading days. While the valuation has certainly improved after the drop, I still don’t see it as a screaming buy by any means. Let’s take a closer look at the stock below: 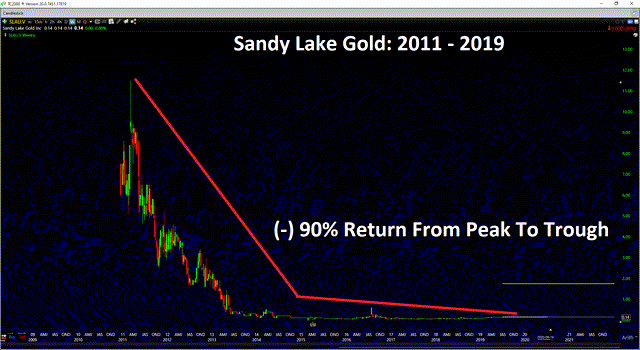 For those unfamiliar, G2 Goldfields’ stock sat dormant for years as Sandy Lake Gold, but a re-branding, share consolidation and focus on Guyana assets sent the stock soaring by over 800% from its lows. The catalyst for this parabolic climb in the share price was high-grade drill results from the company’s Oko – Aremu Project in Guyana, with 2.4 meters of 116.6 grams per tonne gold intersected in OKD-24, and 11.7 meters of 7.2 grams per tonne gold intersected in OKD-20. To date, the company has defined a 1.2-kilometer strike length at the Oko Main Zone, with the deposit drilled to vertical depths of up to 350 meters. There’s no disputing that this is a solid discovery, especially given the fact that it’s relatively high-grade with several holes starting at less than 150 meters below the surface. 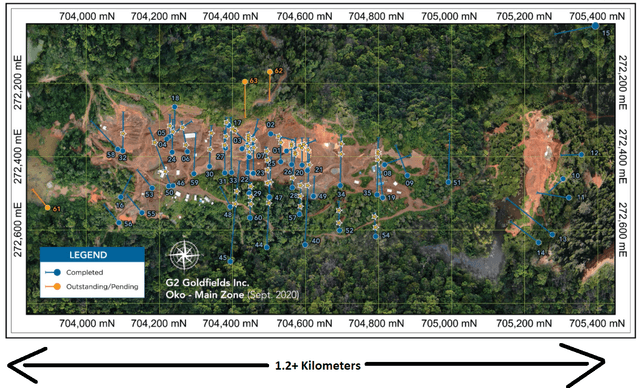 It’s also worth noting that Oko is just one of three targets on the company’s 19,200-acre property. The two other targets to be drilled are the historic Aremu Mine, which is roughly 15 kilometers to the northwest, and the Tracy Anomaly, which lies between Aremu and Oko. Assuming we see similar results from these two targets, there’s certainly a lot of upside at this project, as it’s already looking like there’s a potential for up to 750,000 ounces of gold at Oko alone. However, it’s too early to speculate on Aremu and Tracy at this time until we have at least ten current drill holes confirming the presence of high-grade mineralization, so I see no reason to assign any significant value to these areas just yet. Therefore, the investment proposition here for investors is a 750,000-ounce resource proven up in the next 12 months in Guyana, a jurisdiction that is considered unattractive or Tier-3 by the Fraser Mining Institute, in the same category as South Africa, Botswana, and Brazil.

Currently, African explorers are being valued at $18.87/oz on a median basis, and $26.00/oz on average, which is well below the $30.00/oz to $44.00/oz that Tier-1 jurisdictions are commanding (Canada and Australia). This means that the highest value we would assign to G2 Goldfields’ ounces is $26.00/oz, which is the average enterprise value per ounce for Tier-3 jurisdictions like Africa and most of South America (Colombia, Guyana, Brazil, Bolivia). Based on my belief that G2 Goldfields could prove up a best-case of 750,000 ounces of gold within 12 months, the fair value for Oko alone is $19.5 million. I have come to this valuation by multiplying the $26.00/oz fair value by 750,000 ounces of gold. If we add in another $10 million for speculative upside at Aremu and Tracy, which are large targets, this gives us a conservative valuation of $29.5 million for G2 Goldfields. Let’s take a look at the current valuation and cash position to see what the probability of share dilution is in the near future: 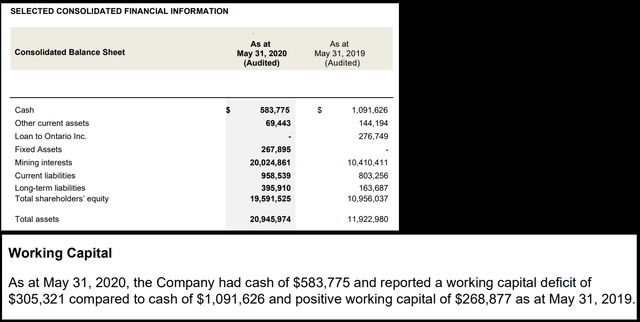 As we can see from the above table, G2 Goldfields finished Q2 with just C$584,000 in cash and a working capital deficit of C$305,000. After quarter-end, the company raised C$5.0 million (C$4.73 million after C$269,000~ commission), which has likely pushed the cash balance closer to C$4.0 million after accounting for the exploration and evaluation expenditures since the end of May. While C$4.0 million might seem like enough to get G2 Goldfields to avoid any more share dilution for another 12 months, I would argue that this is presumptuous. This is because the trailing-twelve-month burn rate for G2 Goldfields is C$5.57 million, roughly 40% above my estimate for the current cash position. 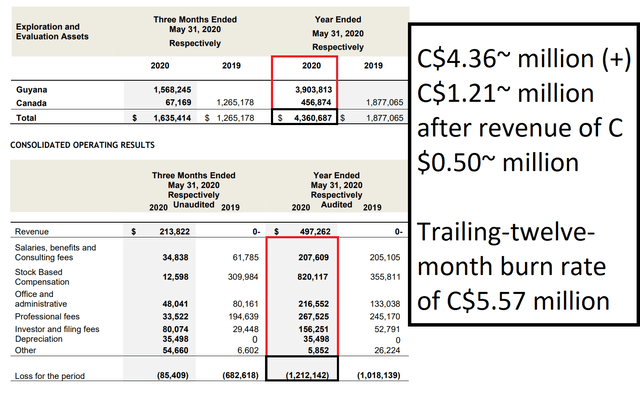 As shown in the above tables, exploration & evaluation [E&E] expenditures in Guyana and Canada came in at C$4.36 million for the past year, while salaries, benefits & consulting fees, stock-based compensation, office & administrative fees, professional fees, and investor and filing fees amounted to C$1.71 million. This adds up to a combined total for expenses (operating & E&E) of C$6.07 million. We can subtract C$0.50 million from this total as G2 Goldfields generates limited revenue from a net-smelter-return from small-scale miners on the Peters and Aremu properties.

Assuming G2 Goldfields generates similar revenue in the forward 12 months, total expenses are likely to come in at a minimum of C$5.0 million. Based on the current cash balance of C$4.0 million or less, it is clear that there’s a high likelihood of further share dilution before Q3 of next year. Therefore, the current fully-diluted share count of 147 million is likely to expand; and I estimate that it will grow to 156 million shares in the next 12 months. This is based on the assumption that another C$5.0 million will be raised at below C$0.55, translating to another 9 million shares added to the share count. To be conservative and giving the company the benefit of the doubt, I will use the current fully-diluted share count of 147 million shares to dig into the valuation.

Based on 147 million shares fully-diluted and a share price of $0.36, G2 Goldfields is currently valued at $53 million, or $50 million after accounting for cash on hand of C$4.0~ million [$3 million]. As noted earlier, I believe the fair valuation for 750,000 ounces in Guyana is $19.5 million, and I’ve assigned $10 million in upside for potential new discoveries at the Aremu and Tracy targets. Given that the current valuation is $50 million, I would argue that the valuation is not compelling here, even after the 60% decline.

In a best-case scenario, and assuming the resource comes in at above 3.50 grams per tonne gold for over 750,000 ounces, I would be willing to assign a fair valuation of $52.00/oz for G2 Goldfields’ ounces as high-grade resources deserve a large premium. However, even if we account for this best-case scenario, this means that the fair value for G2 Goldfields on 750,000 ounces plus $10 million in speculative upside is $49 million. Based on the current valuation of $50 million, this is where we’re already trading; this suggests that upside is limited unless we see a significant discovery or much higher grades in the next 12 months.

Obviously, valuation alone does not dictate where a stock is going as if it did, G2 Goldfields would never have traded up to $0.85 earlier this year. However, given that we’ve got a pre-resource explorer with a high likelihood of further share dilution in the next 12 months trading at $50 million, I believe there are much better opportunities out there in more attractive jurisdictions. However, the market is not rational, and after a nearly 60% decline in three months, G2 Goldfields has now found itself oversold, and could easily bounce 30% or more as nothing goes down in a straight line. The issue is that a bounce of 30% or more would push the stock back to a lofty valuation, and there’s strong resistance at $0.60 where the stock broke down from after its initial leg down. Therefore, even though a bounce is quite possible, I would view rallies above $0.55 as a selling opportunity. 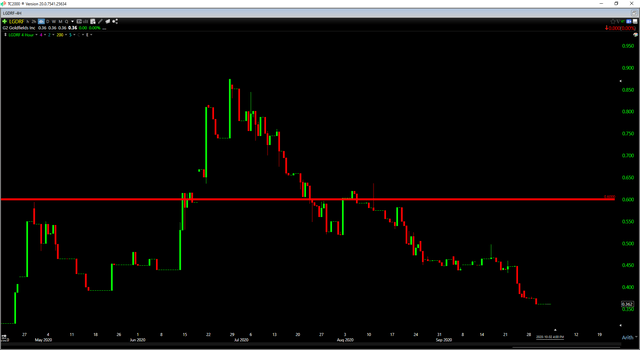 Typically, I would argue that a 58% decline in a stock is a compelling buying opportunity. However, with G2 Goldfields low on cash and trading at $50~ million pre-resource, there’s a good chance that any violent bounces from this oversold condition are just going to run into selling pressure. This is because if the share price were to increase significantly, I believe management would use this as an opportunity to raise more capital. Besides, I would also expect trapped buyers from July and August to become sellers if the share price heads back near break-even. For this reason, I continue to favor gold juniors in better jurisdictions, and I would view rallies above $0.55 before year-end as selling opportunities.

Gold Price Talking Points The price of gold extends the rebound from the November low ($1765), with the Relative Strength Index (RSI) exhibiting a similar dynamic as the indicator bounces back from oversold territory, but […]