US: Markets continue to be volatile ahead of the US elections with the S&P 500 retracing by 10 percent from peak to trough in recent weeks. We previously argued that US equities have historically performed poorly during ‘close elections’, and that investors should look for good hedge against the risk of further downside moves for the rest of the year. One asset we think could receive strong support if volatility remains elevated is the US dollar; figure 1 (left frame) shows that cheaper USD has resulted in higher equities in the past year, especially since the S&P 500 bottomed in March.

Another risk for the US economy is the dramatic decrease in fiscal stimulus received from unemployed people in the past month; the amount of unemployment benefits dropped from $600/weekly to $300/weekly (with an extra $100 coming from the states) after Trump signed a series of executive orders last month. It was reported that up to 10 states have not even signed with FEMA (Federal Emergency Management Agency) for the $300 unemployment stimulus plan, which will be reflected in US economic data at some point. It clearly looks like the US is running out of ‘stimulus’, which could result in higher uncertainty and price volatility in the near term.

Euro: Despite the ECB’s effort to support the equity markets and bring back inflation expectations close to the 2-percent target, European risky assets continue to trade at depressed levels, with some cyclical sectors such as financials trading at historical lows. Business surveys are currently mixed; while the ZEW Economic Sentiment Index has strongly recovered to new highs, the Ifo Business Climate Index is still sitting at extremely low levels compared to prior the pandemic. As we are favoring the US dollar in the current environment, we think it could be interesting for investors to long the euro against the British pound and the Swiss franc in the coming weeks.

UK: In order to help curb the spread of coronavirus, the UK government has announced that bars, restaurants and other hospitality venues will close at 10 pm from Thursday for several months; this will clearly weigh on the potential ‘recovery’ in the UK, which has been one of the most impacted economies in Q2 among the G10 space. Hence, lower growth prospect, higher uncertainty related to Brexit in addition to choppy equity markets will all tend to weigh on the British pound in the coming weeks, which has historically been very vulnerable during periods of high volatility.

Net short specs on US Treasuries have been rising in the past month, up 230K to 475K contracts in the week ended September 15th. It is interesting to see that the 10Y yield has remained low in the past few months despite the recovery in equities and inflation expectations (5Y5Y inflation swap is trading back to 2%). We still expect the 10Y yield to retrace higher in the coming months and the yield curve to continue to steepen towards 1 percent.

EUR/USD: Following months of depreciation against all the major currencies, which pushed EUR/USD briefly above 1.20 in the beginning of the month, the US dollar has remained well supported in recent weeks due to the recent rise in volatility. EUR/USD broke below its 50D SMA and its 38.2% Fibo retracement in the past week and the momentum clearly looks bearish for now. 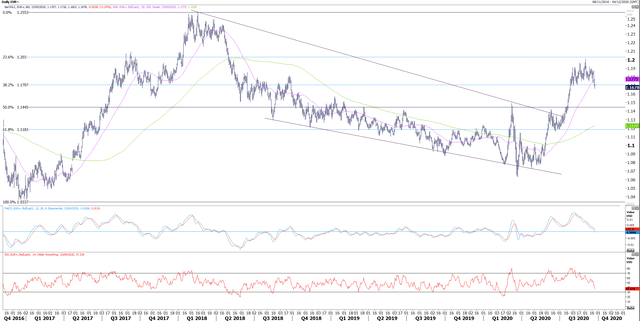 EUR/GBP: The pound remains the risky currency to hold in the current environment; we are slightly bullish on the pair as we think that the euro will outperform the pound if volatility remains elevated. Even though EUR/GBP trades at the high of its long-term range, we think that the single currency could continue to receive strong support against Sterling in the coming weeks and break through the 0.93 level. We will try to buy the dips at 0.9080 with a first target at 0.9250. 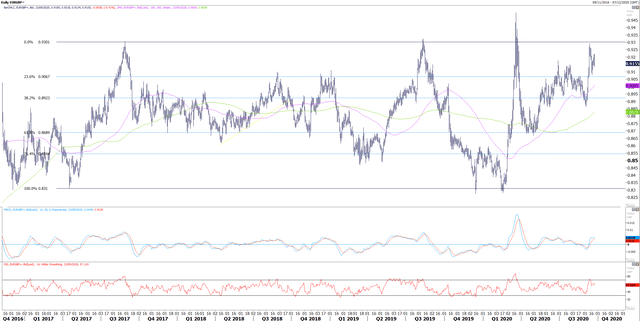 USD/JPY: The yen could also receive strong bids in this environment, but mainly against popular risk-on crosses such as GBP, CAD or AUD. Momentum on USD/JPY looks strongly bearish; it seems that the 100D SMA has acted as a strong resistance and traders take the opportunity to sell the pair each time USD/JPY consolidates higher. We remain slightly bullish on the yen in the near term.

AUD/NZD: The Aussie has been consolidating lower against NZD in the past month following its strong recovery since March; we would favor the Kiwi over the Aussie both looking at the long-term range and how both currencies have reacted to rising volatility in the past.

USD/CHF: We went long the pair at 0.91 as we think that USD/CHF could trade significantly higher in the near to medium term if the USD retraces against all currencies. The Swiss franc could also depreciate against the euro as EUR/CHF trades at historically low levels, which has been weighing on Swiss inflation in the past cycle. 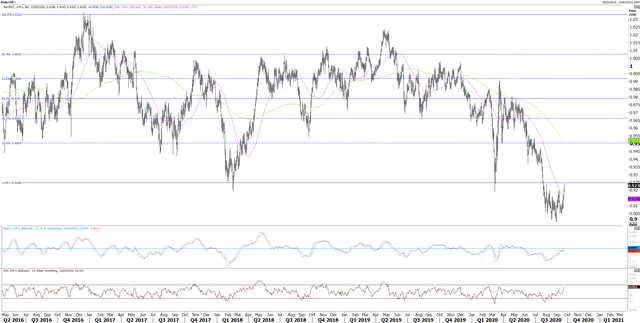 Chart Of The Week

The massive impact of the COVID-19 shock on markets has pushed central banks from nearly all economies to constantly intervene in order to avoid a deflationary depression. Surprisingly, one central bank that has not been increasing the size of its balance sheet is the PBoC, whose assets have remained steady at around CNY 36.5tr ($5.4tr). However, it is important to also look at the dynamics of Total Social Financing, which is a broader measure of Chinese credit.

This chart shows that the annual growth of China TSF reversed from -15 percent in the end of 2018 to 35% in August 2018, which has has historically strongly influenced the price of two ‘highly China-sensitive’ assets: copper and the Australian dollar. Could risky assets continue to receive support in the coming weeks if China continues to loosen its credit policy? 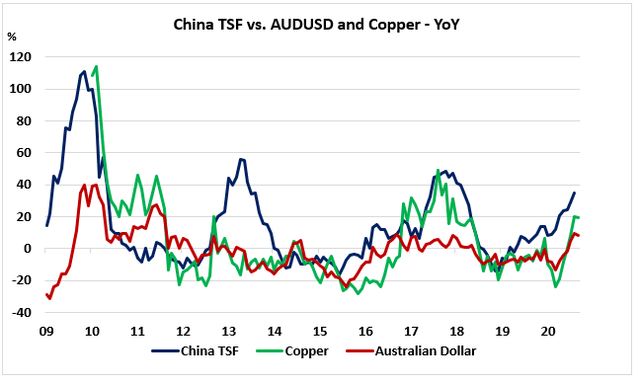 The uncertainty related to US elections in addition to other international factors such as Brexit and ‘semi-lockdowns’ will surely be expressed by an elevated volatility across all asset classes. We remain cautious in the near term and favor the USD among the G10 space; the British pound is the vulnerable currency in this environment.

Disclosure: I am/we are long USDCHF. I wrote this article myself, and it expresses my own opinions. I am not receiving compensation for it (other than from Seeking Alpha). I have no business relationship with any company whose stock is mentioned in this article.