The USD/ZAR pair has continued to trade within the broader range, between the 38.2% and 61.8% retracements drawn from the January low and April high. The longer term descending trendline remains intact as price action reverted back toward the 16.5000 level after attempting a move higher. The Rand managed to claw back all of the ground lost against the USD in the lead up to the recovery plan, even trading below 16.5000.

The recent reluctance to trade away from 16.5000 for extended periods of time may be symptomatic of a market needing a catalyst.

Main Risk Events for the ZAR

News can move FX markets. Learn how to trade the news

In the lead up to the recovery plan, the Rand weakened against the USD only to regain all that lost ground and actually trade lower – at similar levels witnessed before the announcement. 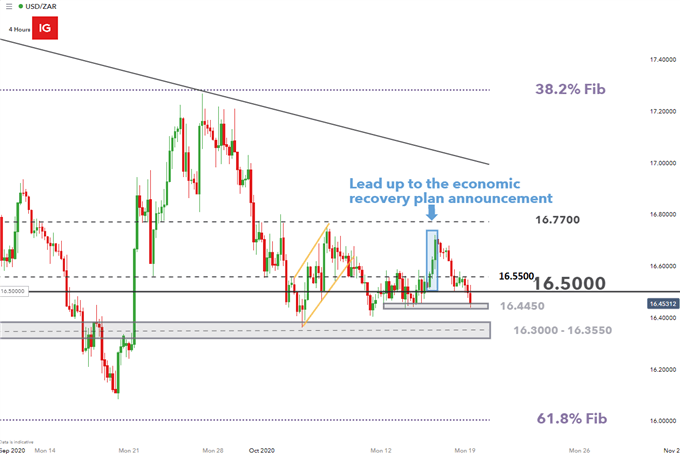 Discover the #1 mistake traders make and learn to avoid it

President Cyril Ramaphosa revealed the economic reconstruction and recovery plan last Thursday and now the focus shifts to the Medium-Term Budget Speech which has been delayed to the 28th of this month in order to make provision for the initiatives mentioned in the president’s plan.

US Elections’ FX Market Impact: Losers Both the DXY Index and gold prices have exhibited weakness in the wake of the US presidential election results. The US political and vaccine development news over the past […]

Quick Take Kinnate Biopharma (KNTE) intends to raise $170 million from the sale of its common stock in an IPO, according to an amended registration statement. The company is a preclinical stage biopharma developing treatments […]