Michael Gove, who is responsible for no-deal planning, issued a warning to the freight industry over potential import and export delays in Kent. Mr Gove mentioned that as many as 7000 EU-bound freight trucks could cause delays of up to 2 days. The reason for this is, according to Gove, is due to around 70% of freight trucks travelling to the EU being unprepared for the new border controls.

The European Union is expected to impose full goods controls on the UK, stopping all freight without the correct documentation after the transition period, effective from 1 January 2021.

Learn what to keep in mind when trading around the news

Similarly to other economies, there was an expectation for improved economic conditions as the UK eased up on lockdown restrictions. Manufacturing (Flash) PMI data slightly beat expectations; while Markit/CIPS Composite (Flash) and Markit/CIPS UK Services PMI (Flash) came in slightly below expectations. Traditionally, figures above the 50 mark indicate improving economic activity.

The EUR/GBP currency pair looks to have consolidated after the bullish MACD crossover and bullish engulfing pattern preceded the strong advance in price.

A break above the pennant formation may lead to a continuation of the initial bullish advance (flagpole). Continued bullish price action brings into focus the 0.9282 level which is the 50% fib extension (drawn from the Feb low to March high to April low). The next level of potential resistance is the 0.9325 followed by the 61.8% Fib extension at 0.9424.

However, a breakdown of the bullish pennant would require a break below the 0.9176 level and the lower trendline. Continued bearish momentum would bring into play the 0.9140 and 0.9057 zones of support before the psychological round number of 0.9000 becomes potential support. 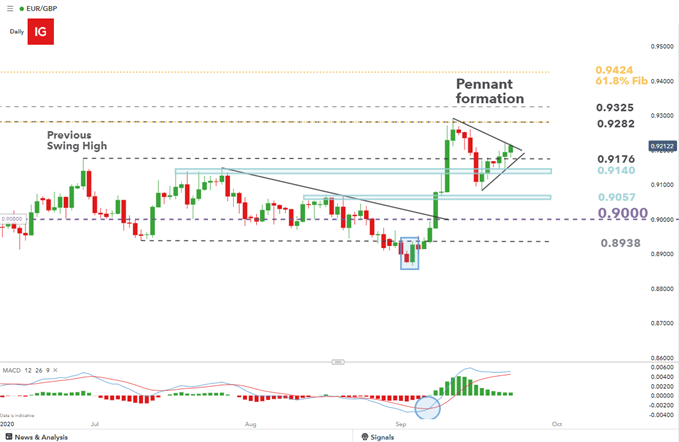 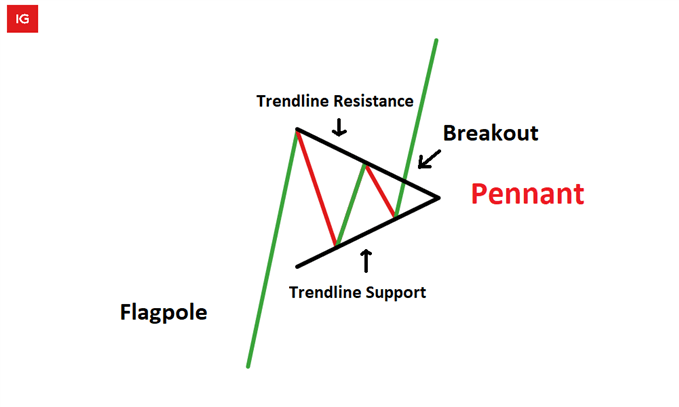 stay up to date with the latest central bank developments

However, there is always the possibility of a breakdown of this pattern which underscores the importance of sound risk management. Refer to the key technical levels in the event of a breakdown that have been identofied above.