The majority of the major asset classes continued rising for the trading week through Aug. 21, based on a set of exchange traded funds. Leading the rally: real estate stocks outside the United States.

Vanguard Global ex-US Real Estate (NASDAQ:VNQI) extended its rally to a fourth straight week, rising 1.1% for the five trading days through Friday’s close. The ETF has been gradually recovering from the March crash, although the fund remains well below its pre-coronavirus high.

US equities posted the second-best performance last week. Vanguard Total US Stock Market (NYSEARCA:VTI) increased 0.7%, the fourth weekly advance. The ETF closed at a record high on Friday and is currently up 6.3% for the year to date.

Meanwhile, the Global Markets Index (GMI.F) continued to rally for an eighth straight week. This unmanaged benchmark, which holds all the major asset classes (except cash) in market-value weights via ETFs, edged up 0.3%. GMI.F has recovered all of the losses in the March crash and continues to push higher into record territory. 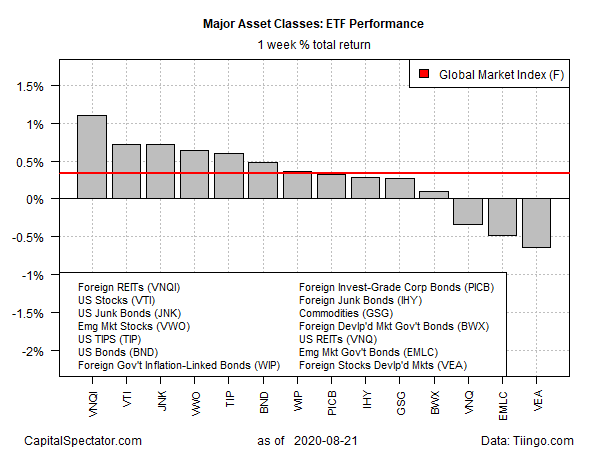 For the one-year trend, US stocks continue to top the major asset classes. Vanguard Total US Stock Market (VTI) ended last week with a 17.7% total return over the trailing 12-month period.

VTI’s one-year increase is moderately ahead of the second-best performer: stocks in emerging markets. Vanguard FTSE Emerging Markets (NYSEARCA:VWO) is up 12.7% vs. the year-ago price after factoring in distributions.

Broadly defined commodities are still the worst one-year performer by far. The iShares S&P GSCI Commodity-Indexed Trust (NYSEARCA:GSG) is down nearly 26% over the last 12 months.

GMI.F, by contrast, remains firmly in positive territory with an 11.7% total return for the trailing one-year window. 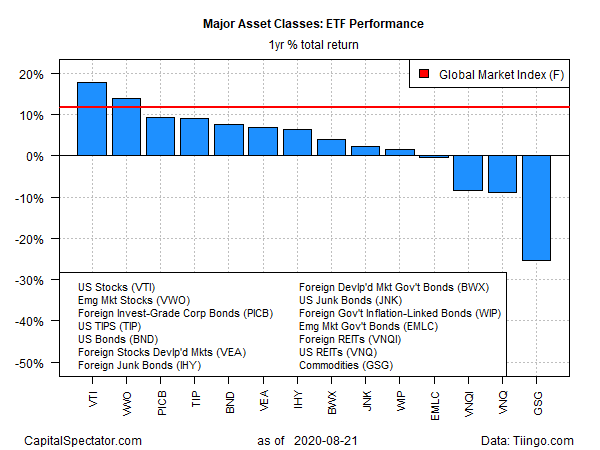 Ranking asset classes based on current drawdown continues to reveal that roughly half of the 14 major asset classes listed above have low or trivial declines relative to the previous peak. US stocks lead the field on this front: VTI is currently at a record high and is the only fund on the list with a zero drawdown, as of Friday’s close.

Meanwhile, the deepest drawdown is in broadly defined commodities via GSG, which ended last week’s trading at roughly 69% below its previous peak. 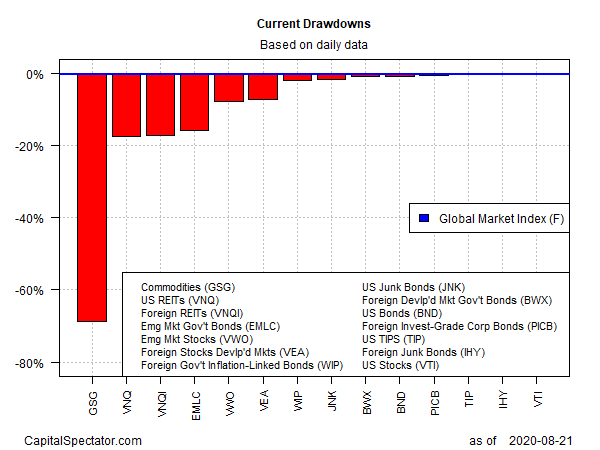 © Reuters. (Reuters) – Video-sharing app TikTok said on Saturday it has already committed to the U.S. government oversight of data security in the country, and that it was “disappointed” by the Trump administration’s decision […]

Welcome to another edition of my monthly series of 10 Dividend Growth Stocks, in which I rank a selection of dividend growth stocks in Dividend Radar and present the 10 top-ranked stocks for consideration. Dividend […]