The AAII (American Association of Individual Investors) survey asks its participants whether they think the stock market will be higher/lower/or the same, six months in the future. In the latest survey, only 23.7% thought that the market would be higher in six-month’s time, while 76.3% – bears plus neutrals – could not bring themselves to even imagine the market higher in six-month’s time. Bear markets have never started when individual investors were this fearful.

The AAII individual investors tend to be older (baby boomers) and more experienced than the investors who are trading small-lot options on phone apps such as Robinhood. In addition to having more experience than the young Robinhooders, these older investors also have the memory of the Great Financial Crisis (in addition to the fainter-memory of 2000) which caused a fearful amount of personal economic pain; they haven’t been able to forget that experience of near-economic-death. The young options traders are buying this tech rally against their parent’s (AAII investors) advice.

It is ironic that these AAII investors are the same cohort that in the 1990s were betting on the dotcom tech-rally, against the advice of their own fearful parents and grandparents who remembered the 70s’ recession. Recall that Greenspan’s “irrational exuberance” warning in 1996 was made as the SPX started a 100% rally that lasted 4-years. Bear markets have never started when individual investors were this fearful (chart below). 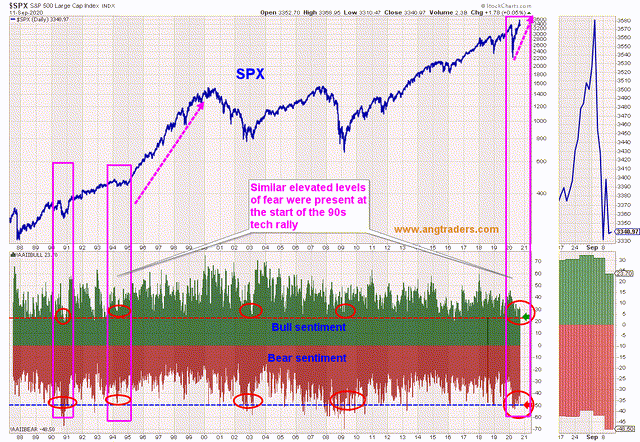 On a shorter time frame, a drop in bullishness to the current levels correlates with local market bottoms (black vertical arrows). If we are not yet at a local bottom, then we are close to one (chart below). 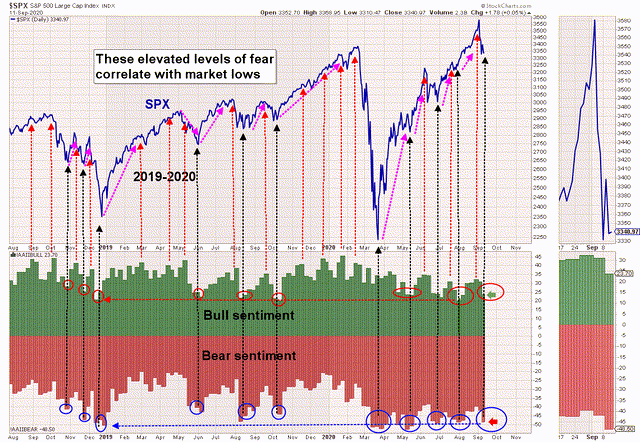 There are other ways to measure sentiment that do not involve self-reporting surveys. The put:call ratios, for example, give us an idea of how much fear is present in the option-buying part of the market. By judging the relative amount of hedging that is being done – higher ratios imply higher hedging – we get a measure of the fear-level that is in this corner of the market.

Relative to the past decade, the ratios are low right now, but have risen considerably from their recent lows. This means that, although they remain relatively low (low hedging and low fear), they have increased considerably in the last few days which implies some fear has developed in this corner of the market. This increase in fear is bullish for the market (the proverbial wall-of-worry) and should limit the depth of the pullback.

The chart below, shows the nominal and the 8-dMA of the equity-only put:call ratio. There is a solid negative correlation between the put:call ratio and the SPX. Notice that the nominal (pink line) has stalled near the down-sloping trend line, and that the SPX has reached its own up-sloping trend line. It remains to be seen how much further the ratio will rise and how much more the SPX falls, but we do not see a favorable risk/reward for increasing either short or long positions at this point. 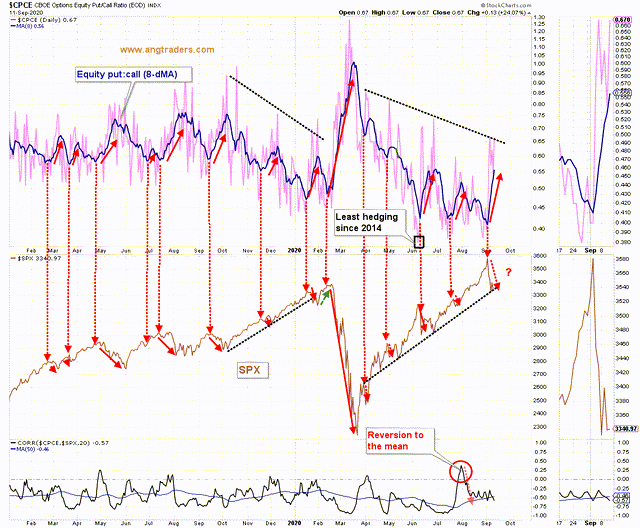 The total put:call ratio is displaying the same increase in fear as the equity-only ratio above. The nominal ratio has spiked (pink rectangles below) which tends to precede local bottoms in the SPX. This also implies that we are close to a bottom... although further downside is not negated; we could see a bounce and a retest of the low, like occurred in June (chart below). 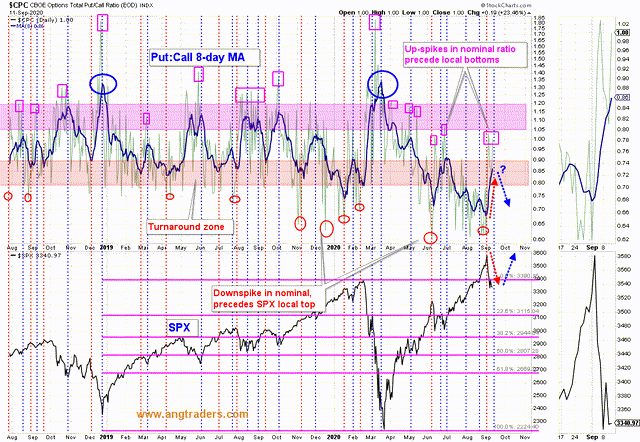 It has been a widely broadcasted fact that the put:call ratios are at the low end of two decades’ worth of ratios; low ratios mean low fear and too much complacency. While this is true (and obvious), when compared to the 1990s, these levels are relatively high and indicative that there is, in fact, the same level of fear as at the start of the 90s tech bull market (chart below). 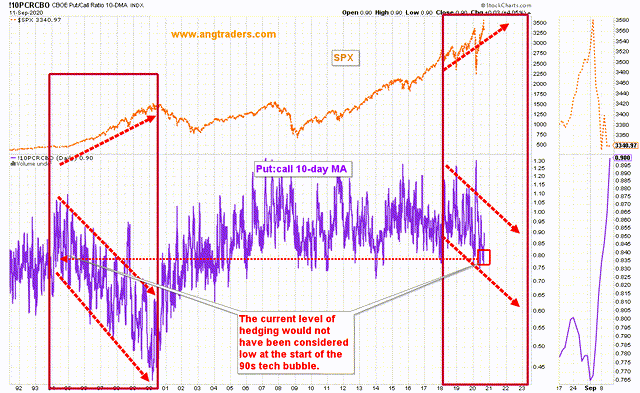 Both, the AAII sentiment and the put:call ratios are displaying levels of fear that match the early 1990s….just before the massive dotcom-tech rally.

“ I am SO VERY thankful for the discovery of this site, and the wisdom and knowledge I have gained ... “

” I have not seen this type of analysis anywhere else. Please keep up the awesome work! – James “

“ Happy ANG subscriber here. I believe them to be the best broad market analysts on seeking alpha. “

” Best here in seeking alpha…@ANG Traders . Best of the best! “

Mobile gaming was in the VC spotlight last week, led by the $100M Series A raise by potential Zynga (NASDAQ:ZNGA) competitor Playco, which came out of stealth with a $1B valuation in a round led […]