Fastly’s (FSLY) stock sell-off is not a reason to react. The stock retraces its steps to where it was about a month ago. Meanwhile, the stock is now priced at approximately 42 forward sales, which is in line with its close peer.

All considered, while there’s a lot to like about this investment, I contend that investors would do well to be prudent and hold rather than to rush and buy.

Firstly, that the company’s growth rates are not quite as strong as many were pricing in (more on its valuation later). Investors should now be pricing in 43% y/y revenue growth rates at the top end, assuming Fastly comes in at the high end of its negatively revised guidance.

Secondly, it now appears the case that the whole digital acceleration is not quite as beneficial as many investors were pricing in. Why? Because if look back to 2019, even in Q4 2019, before COVID, Fastly was already growing at that point, at 44% y/y.

Thus, altogether, this does away with the whole thesis that Fastly’s prospects are benefiting from the world’s digital acceleration. Or better said, the degree to which Fastly is benefiting is less than many would have thought, and indeed, less than many had been pricing in.

In fact, admittedly, at one point in August, I too was long this stock.

Time to Put Everything into Perspective

The first rule to deal with this sort of situation is not to make any bold rushed moves. If bulls are firmly set on owning Fastly’s long-term growth story, then they should not be looking to sell into the bad news. In fact, it’s bad practice to sell into bad news.

It’s at these exact moments, being able to go beyond reaction and towards responding that differentiates investors in the bull market. Because, during the bull market, everyone is a genius.

Looking out wider, at least from the after-hours reaction, I do not see reasons to believe that this isolated instance is having any contagion effect on other stocks, such as Cloudflare (NET).

However, this does generate questions on everyone’s favorite metric: Dollar-Based Net Expansion Rate. 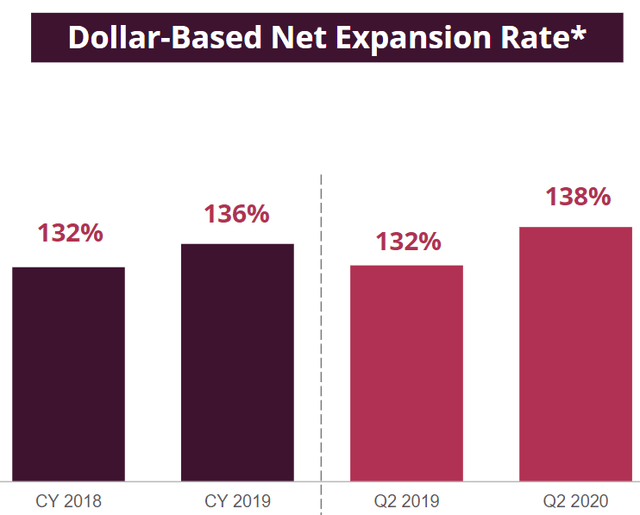 Remember, every investor (myself included at one point) is paying a large premium here for Fastly’s ability to have such strong net expansion rates, well above 130%.

However, now it transpires, that enterprises may actually be feeling the constraints more than we were lead to believe.

As we can see in the press statement, TikTok’s (BDNCE) was lower than expected. But looking further, we can also see that:

During the latter part of the third quarter, a few customers had lower usage than Fastly had estimated

Again, for now, this appears to be an isolated instance facing Fastly, but if more companies emerge asserting that customers are discontent with paying usage-based billing, this could have a pronounced effect on other SaaS favorites and their respective valuations.

As many have noted already, Fastly’s share price today, including its AH reaction simply puts the stock back to prices it was a month ago. In other words, the overall sentiment towards Fastly hasn’t materially changed all that much.

Does this mean it’s a buying opportunity? Again, to repeat, for investors determined to stay for the long-haul, this isn’t materially changing the story here enough to sidestep this investment on the back of this news. Accordingly, I don’t believe that its shares are overly expensive.

Consider this, Fastly is being priced at approximately 43x forward sales (including after-hours correction). Yet, it’s largely expected to be growing at roughly 40%.

On the other hand, Cloudflare is also largely expected to finish this year growing at 40% y/y growth rates, yet its priced at 46x forward sales.

Having said that, Cloudflare’s non-GAAP gross margins reached 76.8% in Q2 2020, whereas Fastly’s non-GAAP gross profit margins were only 61.7% during the same period — a full 1,510 basis points lower.

As we go into Q3 earnings season, SaaS stocks are going to be fundamentally tested. Tech has been the biggest driver of stock market returns during 2020, and largely being pricing off ”new normal” investment thesis, where investors were willing to pay large multiples for visibility.

For now, including the after-hours sell-off, Fastly trades for 43x forward sales which are largely in line with Cloudflare. Having said that, Cloudflare is arguably the higher quality company of the two, as it carries substantially higher gross profit margins.

Nonetheless, I do not believe that Fastly is shockingly expensive.

My Marketplace highlights a portfolio of undervalued investment opportunities – stocks with rapid growth potential, driven by top quality management, while these stocks are cheaply valued.

As an experienced professional, I highlight the best stocks to grow your savings: stocks that deliver strong gains.