Falcon Minerals (NASDAQ:FLMN) is a C-Corporation that owns mineral rights with oil accounting for around half of its production and over 70% of its revenues.

Falcon’s primary area of focus is the Eagle Ford, which accounts for approximately 85% of its total production (in 2019) and over 90% of its projected revenues. It also has interests in the Marcellus Shale.

Falcon appears to be generally undervalued at the moment, as it appears capable of delivering a $0.40 per share dividend in 2021 as well as a modest amount of debt paydown. Falcon is hindered a bit by its relatively small size, which leads to cash G&A costs adding up to around 15% of its revenues. This is its largest cash expense though, so its margins are still good at low-to-mid $40s WTI oil.

Falcon’s Eagle Ford position is concentrated in a high-productivity area of the Eagle Ford. It has 256,000 gross acres (2,700 net royalty acres) in Karnes, DeWitt, and Gonzales counties.

While the Eagle Ford is not as popular as the Permian (with the Eagle Ford’s recovery to 2019 production levels potentially taking several years), it does have some advantages compared to other areas. The Eagle Ford’s location near the Gulf Coast refineries and LNG export terminals insulates it from the pipeline issues and wide differentials that areas such as the Bakken have to deal with.

Falcon indicates that there is currently line-of-sight development for 3.13 net wells in the Eagle Ford.

Falcon believes that its 2021 production may average around 5,000 BOEPD based on its line-of-sight wells, with production higher in the second half of the year compared to the first.

Falcon typically receives a modest discount to LLS for its oil, and LLS typically trades at a premium to WTI. This premium for LLS is around $1 to $2 to WTI based on current 2021 strip, but it has been significantly higher in the past (such as $8 above WTI in April 2019). Thus, Falcon realized $4 above WTI for its oil in Q2 2019, but it may realize slightly below WTI for its oil in 2021.

Falcon has oil and gas hedges for Q1 2021, but those hedges have essentially neutral combined value at current strip prices. 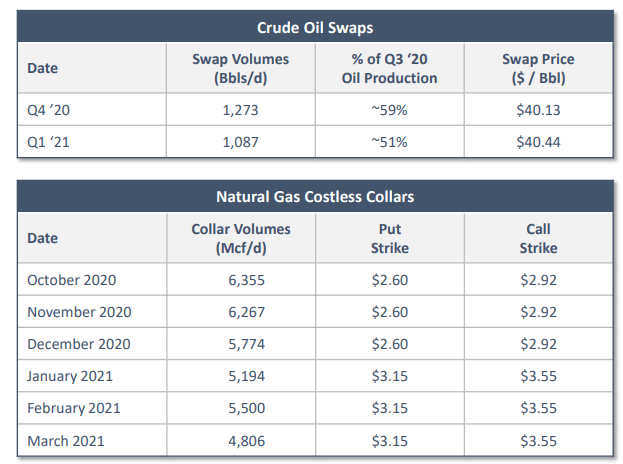 At the last report, Falcon did not have any hedges beyond Q1 2021.

Falcon is projected to have $14 million in cash expenditures in 2021, leaving it with $39 million in positive cash flow to use for dividends and debt paydown. Falcon doesn’t have capital expenditure requirements. Its main expense involves G&A, which is relatively high per BOE due to its smaller size.

If Falcon puts close to 90% of its positive cash flow towards dividends, that would leave it approximately $0.40 per share for dividends in 2021. For 2020, Falcon believed that substantially all of its dividends would be classified as non-dividend distributions.

A $0.40 dividend represents a healthy 17.5% yield at Falcon’s current $2.28 share price. This dividend level would also allow Falcon to reduce its net debt by around 11% during 2021 based on the above-projected results.

Falcon’s net debt is projected to be reduced to approximately 0.8x EBITDAX by the end of 2021.

Falcon’s value is dependent on commodity prices, but valuing it based on low-to-mid $40s WTI oil appears reasonable to me. This would support that valuation in the mid-$3 per share range.

Falcon Minerals appears to be on track to average around 5,000 BOEPD in production in 2021, which would support a $0.40 per share dividend (along with a modest amount of debt reduction) at current strip prices. Falcon looks to have decent upside if oil prices end up averaging at least in the low-to-mid $40s for 2021 and subsequent years. In that scenario, Falcon’s shares have an estimated value of around $3.34 to $3.80, which would give it a low double-digit yield.

We are currently offering a free two-week trial to Distressed Value Investing. Join our community to receive exclusive research about various energy companies and other opportunities along with full access to my portfolio of historic research that now includes over 1,000 reports on over 100 companies.

Disclosure: I/we have no positions in any stocks mentioned, but may initiate a long position in FLMN over the next 72 hours. I wrote this article myself, and it expresses my own opinions. I am not receiving compensation for it (other than from Seeking Alpha). I have no business relationship with any company whose stock is mentioned in this article.

Car dealerships are not an area that many investors would consider exciting. This might be especially the case when you consider that 2020 has been the time of COVID-19. A contracting economy and the ensuing […]