Wall Street sells stocks and bonds, but what it really peddles is hope. – Jason Zweig

It is rare to find a stock that is so consistently strong over days, months, years, and decades. There is a stock out there which has churned out consistent returns decade after decade. Despite gaining over 1,700% in the last decade, this stock has even more upside in the 2020s. While stocks like Amazon (AMZN) and Netflix (NFLX) get most of the glory as pure growth stocks and darlings of the 2010s, Fair Isaac Corp. (NYSE:FICO) is a strong stable name that has been ranked as one of the Top 10 stocks of the last 10 years.

Fair Isaac is a company that’s been around since the 1950s and is an important cog and staple in consumer lending and assessor of consumer credit risk. But what makes Fair Isaac so unique is that they are so innovative and adaptable. While the company is best known for consumer lending and assessing consumer risk through its FICO score, it has become a top FinTech innovator involved in business automation and AI, data analytics, and software.

FICO scores have been the standard for decades and is a vital component of credit health. This score influences everything ranging from the amount of credit that’s available to a person, and the terms that lenders may offer. Every single means of obtaining credit, whether for a credit card, an auto loan or a mortgage follows from the score.

Simply put, lenders want to know how much risk they are taking when lending out money. This is especially true in 2020. No matter what the macro level economic conditions are, people will always want loans, and lenders will always want to understand their risks. No matter what the situation, lenders will want to see a credit report and a credit score based on the information in the report. Arguably, the FICO score has never been as important as it is today.

Despite Its Core Business, Fair Isaac Is Innovating and Evolving

Fair Isaac has been the gold standard in credit scoring for decades and decades. However, what makes Fair Isaac such an attractive company, is they are continuing to evolve and innovate. They are considered one of the top 25 FinTech innovators in the world. Just as Fair Isaac innovated in the late 1950s with their FICO score, they are innovating in the 2020s through machine learning, business automation, data analytics, and software. Two thirds of Fair Isaac’s revenue comes from selling software for business functions, including fraud detection.

As mentioned before, Fair Isaac is considered to be one of the greatest stocks of the last decade, gaining ~1,700% since 2010. However, if 2020 has shown anything, it has shown that Fair Isaac is such a stable fixture, that it is relatively immune to COVID downturns. While the stock bottomed in March, along with the broader market, it’s up by approximately 17% since January and has gained 106.5% since it bottomed March 18. But analysts, despite Fair Isaac’s relatively expensive valuation, believe that the company has more room to run with an average upside price target of around 11%.

Stocks overall have seen a consistently upwards trajectory in earnings estimates this quarter. But the changes in Fair Isaac’s earnings estimates are largely due to the fact that they have not only beaten estimates in the last three of four quarters, but they have crushed them. Fair Isaac beat earnings in Q3 2019 by 19.60%, Q1 2020 by 21.60%, and Q2 2020 by 19.40%.

But this isn’t all. Fair Isaac’s earnings estimates for the current quarter are actually projected to outperform the same quarter last year, pre-pandemic! While other companies are experiencing earnings upgrades for Q3, they are still drastically lower than the same quarter last year. Their average estimate for EPS this quarter is $2.32 a share, up from $2.01 a year ago. This is also a distinct upgrade from their Q3 estimate of $2.09 three months ago. 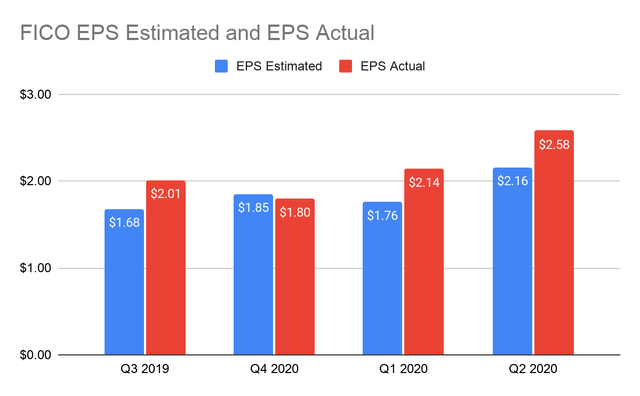 Summarizing the financials and valuation level

Outside of growing earnings estimates, Fair Isaac, as mentioned before, has been on quite a run since March, jumping by over 100%. It is also trading 112.4% above its 200-day moving average. But what makes this such an attractive entry point, is that analysts see more room to run despite its relatively high P/E ratio. There is a consensus 11.1% price upside, on top of all of its earnings upgrades and projections. Fair Isaac’s sales growth is also projected to grow by 3.60% this year, with an 8% CAGR over the next 5 years.

Furthermore, the company’s return on assets (ROA) and return on equity (ROE) show how efficiently they generate profit from their assets and their equity, with outstanding numbers of 15.8% and 89.9% respectively. Their figures of current ratio and quick ratio also indicate that they can meet all of their short-term obligations, with figures of 1.0 and .9 respectively.

Let’s compare Fair Isaac to four of its main competitors: Fiserv (FISV), Equifax (EFX), ACI Worldwide (ACIW), and Jack Henry & Associates (JKHY). All of these companies are involved in some form of FinTech, credit scoring, or business analytics.

Let’s first compare Fair Isaac’s ROA and ROE to their competitors. If we graph this out by taking the ROA as the X-axis, and the ROE as the Y-axis, we can visually see how much more efficient and profitable Fair Isaac’s assets and equity are compared to the four competitors. 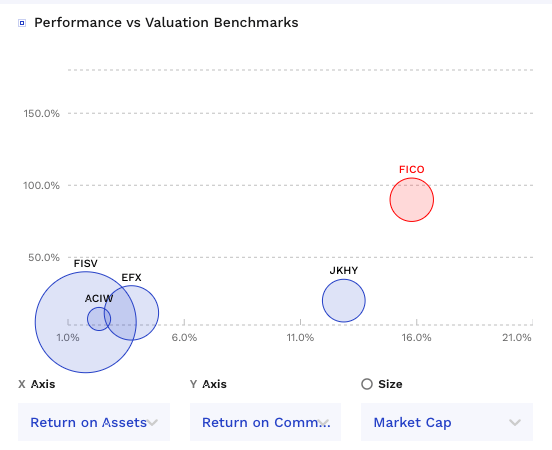 No other company even comes close to Fair Isaac’s numbers. Fiserv, ACI Worldwide, and Equifax’s ROA and ROE are relatively underwhelming, and the only company remotely close is Jack Henry & Associates with a ROA of 12.9%. But even their ROE of 19.9% does not come close to Fair Isaac’s.

Now let’s compare how each of these stocks has performed over the past decade. This is another illustration of how no competitor even comes close to Fair Isaac’s performance over the long term. 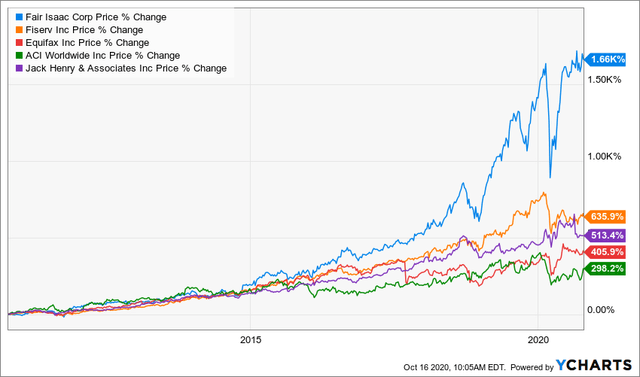 And if we compare the returns in the short term since the bottom of March 18th, we can see that the competitors still don’t compare to Fair Isaac. 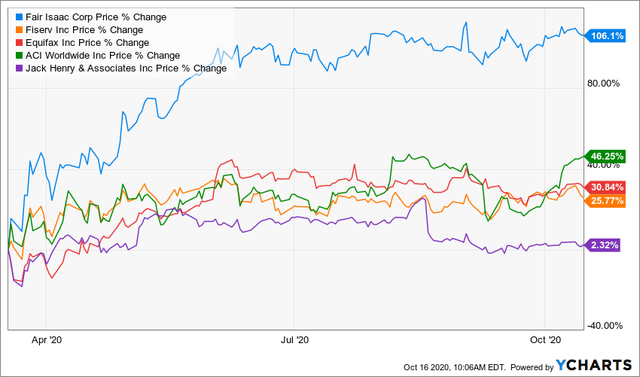 While Fair Isaac has jumped over 100% since March 18th, none of its competitors have even come close. ACI Worldwide and their returns of 46% since March aren’t even half of what Fair Isaac’s are.

While Fair Isaac’s P/E ratio, both trailing and forward, is high at 54.7x and 49.3x, it is middle of the pack compared to its competitors. 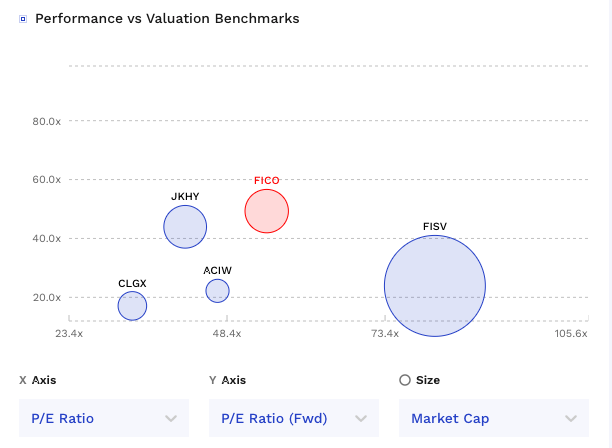 High P/E Ratio: Fair Isaac has an astronomically high P/E ratio. While other high-flying tech names may have a higher P/E ratio than Fair Isaac, and while Fair Isaac’s P/E ratio is relatively middle of the pack relative to its competitors, this is still something to be mindful of. The stock has moved high during difficult economic conditions, and having an overstretched valuation is something to be cautious and mindful of.

Holds Significant Long-Term Liabilities: This is also something to be very mindful of. Although Fair Isaac has the clear ability to pay off its short-term debts, and has very little bankruptcy risk, looking at their balance sheet shows more long-term liabilities than ideal. In fact, their total long-term liabilities significantly outweigh their total equity. While in the short term this is not an issue, in the long term it could be an issue if the economic recovery continues to lag. 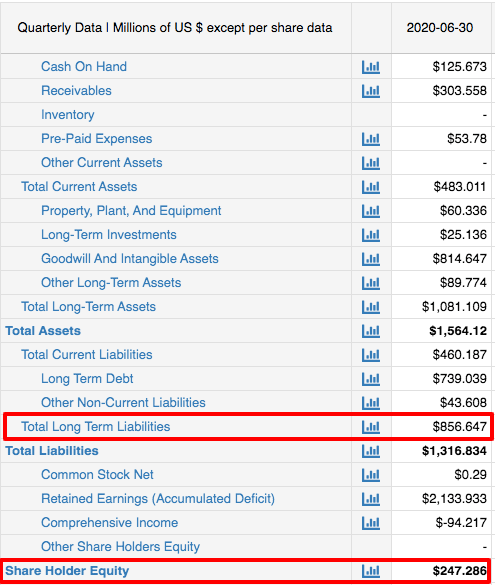 Lag in More Stimulus: This is a macro-level risk that every stock is confronting. The question that companies have to answer is “what will happen to our stock if this impasse in stimulus talks continues?” This market is built on a house of cards right now. Stock valuations and price levels, including Fair Isaac’s, are not sustainable unless there is a second stimulus package and potentially more monetary policy help from the Fed.

There are certainly risks for this stock, and any stock. However, Fair Isaac is such a fixture that is a hybrid of stability and innovation, that the concerns are frankly low. They are a profitable and efficient company that has truly cornered their industry with a niche. This is over the course of decades, not months or weeks. Fair Isaac truly has an answer for all of their risks, and they are clearly more than capable to persevere and grow no matter what the conditions are.

Sometimes, you might not realize your biggest portfolio risks until it’s too late.

That’s why it’s important to pay attention to the right market data, analysis, and insights on a daily basis. Being a passive investor puts you at unnecessary risk. When you stay informed on key signals and indicators, you’ll take control of your financial future.

My award-winning market research gives you everything you need to know each day, so you can be ready to act when it matters most.

Additional disclosure: This writing is for informational purposes only and Lead-Lag Publishing, LLC undertakes no obligation to update this article even if the opinions expressed change. It does not constitute an offer to sell, a solicitation to buy, or a recommendation regarding any securities transaction. It also does not offer to provide advisory or other services in any jurisdiction. The information contained in this writing should not be construed as financial or investment advice on any subject matter. Lead-Lag Publishing, LLC expressly disclaims all liability in respect to actions taken based on any or all of the information on this writing.

Kirkland’s Inc. (NASDAQ:KIRK) has had a great run this past year, but the valuation is starting to look expensive. The company was due for a bounce after having a terrible 2019 fiscal year where the […]