The oil & gas industry has been absolutely pummeled for about seven consecutive years now. Oil prices collapsed from over $100/bbl for both WTI and Brent in 2014 to under $20/bbl in 2020 due a culmination of oversupply, the OPEC+ price war, and the coronavirus pandemic collapsing demand from nearly every industry you can think of: airliners, shipping (due to trade), cruise lines, automotives (commuting, shopping, dining out), etc. Putting the coronavirus damage into context, it was easily the single greatest oil demand destroyer in modern history. In fact, oversupply and limited capacity became so horrible that crude oil futures actually turned negative in April.

Now we’ve seen numerous oil & gas companies file for bankruptcy around the world. Industry watcher Rystad Energy stated that the total Chapter 11 bankruptcy filings would reach a new high in 2020 under various scenarios of suppressed oil prices. Even the integrated majors, which carry the lowest breakeven costs in the industry, have reported significant revenue declines and earnings losses. Essentially, the entire industry has gone to hell in a hand basket, and investors have understandably dumped positions hand over fist.

Presently, fresh capital is being allocated with extreme caution, and investors have become very selective in the oil & gas industry. While a recovery appears inevitable long term, it’s a much safer bet to own operators that have operations not strictly contained to upstream, but to other segments of the industry as well. That leads us to Exxon Mobil Corporation (XOM).

Exxon Mobil has traded down about 41% over the last year, almost in line with the broader decline in crude oil prices.

In fact, the current price of $42/share sells equivalent to the market capitalization and enterprise value not seen since January 2004. Another unique situation here is that not a single bulge bracket research firm has assigned XOM an Outperform (or Buy) rating in nearly an entire year, which signals capitulation by Wall Street:

Adding fuel to the fire is the concern about the potential dividend cut. Exxon pays out approximately $14.7 billion in dividends annually, whereas its trailing 12-month free cash flow has soured to less than $3 billion (with free cash flow turning negative in 2Q). As a short-term remedy, management has decided to cut operating expenses and capital expenses in hopes of preserving the company’s Dividend Aristocrat status. The real question of whether that the dividend can be maintained is if the market realizes a sustained rebound in crude oil prices. For that to happen, crude oil prices would likely need to retain $55/bbl or move about 35-40% higher. Don’t hold your breath, at least for 2020. So, there’s a very real possibility that the dividend could be cut. On the other hand, even if it is cut and oil prices rebound, say, by 2021 or 2020, management can simply reinstate the historical dividend. Investors have to remember that there’s a difference between dividend reductions that are permanent and temporary in nature, i.e., XOM could certainly fall in the latter category, as its cash flows heavily reflect pricing.

Certainly, some of the sell-off in XOM stock is warranted, however, when considering all the facts, it appears we may have reached a point of maximum pessimism. In fact, such overwhelming negativity could actually be a sentiment signal to buy the stock to generate solid returns.

The market may have overreacted to the downside, particularly when considering that over the next two to three years, economies will reopen, GDP growth will resume, and so will the demand for crude oil, natural gas, and derivatives (some of it already has). According to XOM’s investor presentation, transportation fuels (one of the larger aggregated demand drivers) has already fully recovered in Asia-Pacific, while Europe and the U.S. are about ~85% of the way there: 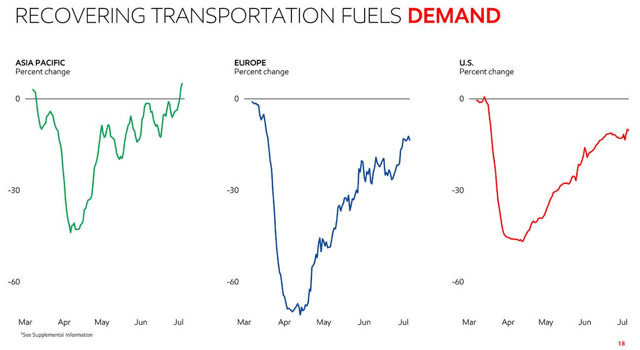 On the supply side, there’s an old saying that the solution for high commodity prices is high commodity prices, where producers will flood the market with volume until there is a broader rebalancing. Well, the same is also true for low commodity prices, and crude oil might be one of the most depressed commodities in today’s market. As oil prices have stayed below $40/bbl, a vast majority of E&P companies have lost money and, consequently, idled their rigs or filed for bankruptcy. While 2015 was certainly a steep drop in worldwide rig count, 2020 made that collapse look like child’s play. Presently, the worldwide oil rig count is down by 72% off its last high, the steepest in over 30 years:

A 30-year low rig count only means there’s less aggregated supply available for 2020 and heading into 2021, which will result in higher oil prices. Putting both demand and supply factors together, we could see oil prices gradually increase, and $55/bbl doesn’t seem to be out of the realm of possibility (which again, would allow the company to fully cover its current dividend distribution).

Exxon missed the top and bottom line in 2Q 2020 and had two consecutive quarter-to-quarter losses. However, the reaction by the market was all but muted, with shares trading down only slightly. The reason is because the market already knew the second quarter was going to be very challenging, especially regarding its upstream business. During the quarter, the company’s average realized price per barrel was only $20, which, in effect, resulted in a $1.65 billion loss combined for both U.S. and international.

The silver lining is we now know that crude oil prices have since doubled against that level to about $40/bbl. Therefore, 3Q will definitely show a sequential improvement. The other two items business units, downstream and chemicals, also showed much better performance as end markets stabilized. Altogether, it seems quite clear that 2Q 2020 will be the kitchen sink quarter and there will be gradual improvements as we progress through 2020 and in the years ahead.

Focus on What Matters

Don’t fall into the trap of not being able to see the forest for the trees. The oil & gas industry is very cyclical and right now were coming off the bottom, after observing one the company’s worst quarters ever. Instead, focus on the long term. One of the reasons Exxon Mobil has remained as an industry leader is because the company generates superior economic returns relative to industry peers over time. Return on invested capital (NOPAT relative to equity and total debt) measures profitability against capital that is being invested into its projects. By using a three-year median, we smooth out the volatility from year to year and see that Exxon ranks above its four largest competitors:

Additionally, Exxon Mobil operates with minimal borrowing costs on its debt because of its high credit quality and solid credit ratings of “AA” from all three bond rating agencies of S&P Global, Moody’s and Fitch. One concern among the analyst community was that XOM could squander its credit rating for the sake of maintaining the dividend. However, that exact point was actually addressed by Neil Chapman during the 2Q conference call. Essentially, he stated that planned cost reductions and improvements to liquidity through low-cost debt issuance would allow the company to not have to issue any more incremental debt:

“As Stephen described, we set very aggressive operating and capital expense targets. The organization is exceeding those targets, which positions us very well for the rest of the year. We ended the quarter with more than $12.5 billion of cash, which is in line with the business needs. Given this level of liquidity, we don’t see a need to take on additional debt.”

In other words, XOM is becoming leaner from a cost perspective and a much-desired lid on financial leverage has been established.

Every integrated major company has been shedding assets over the last year or two. That can be examined both from total assets and more specifically, PP&E, which is directly linked to earnings power. Since 2019, European operators have been making a dramatic shift towards renewable energy away from traditional oil & gas markets due to climate concerns. While that’s nice to see from a social/environment perspective, investors typically prefer companies that operate as pure plays that focus on what they’re best at, especially when it means diworsifying away from the core business. And while the majors have definitely been making acquisitions during this cycle low at cheap valuations, most companies have been net divesting assets. Both PP&E and total assets are down quite significantly.

The only company that has not been doing so is Exxon. In fact, it has kept the vast majority of its asset base while adjusting the mix by exiting projects in Europe (e.g. Norway) while expanding into more oil-friendly environments such as North America, South America, and Africa. XOM invests heavily during downcycles (when other companies are slashing investment, laying off workers, and stacking rigs) and this latest cycle of aggressive capex spend (10+%) should carry the company over for the next few years.

Walking over to valuation, it’s not easy to estimate what Exxon is worth in the current environment. But assuming that crude oil prices return to $55/bbl (the average of the last five years), the company would be able to support its current dividend payout of ~8%, which is a decent return all things considered. Although, sustainably higher oil prices, with similar production, in combination with recent cost reductions could bring investors an annualized return of ~10%. It’s also worth considering XOM as it is one of the best asset plays in the industry. Today, the company is selling for a price to tangible book value of less than 1x, modestly below the current average of 1.15x and steeply below the long-term average of 1.6x.

Economies worldwide are slowly beginning to recover and demand for oil is returning. At the same time, supply has been choked off and only the lowest cash flow breakeven operators are maintaining any reasonable semblance of a healthy balance sheet. While headwinds still linger, it’s more than likely that oil prices will swing to the upside rather than decline further. Even with the potential for a dividend cut, investors should consider adding XOM to their portfolio as the worst has passed and XOM appears the best positioned for a recovery in the oil industry. What do you think? Let me know in the comments below.

Disclosure: I am/we are long XOM. I wrote this article myself, and it expresses my own opinions. I am not receiving compensation for it (other than from Seeking Alpha). I have no business relationship with any company whose stock is mentioned in this article.

Thesis CVS Health (CVS) is a diversified healthcare company that has a strong track record and that should be able to capitalize on growing healthcare spending over the coming years as well. Right now shares […]