Exxon Mobil (NYSE: XOM) is now the third largest publicly traded oil company in the world, behind Chevron (NYSE: CVX) and Saudi Aramco (ARMCO). The company has recently announced that it’s proceeding on its Payara offshore development, with production expected to begin in 2024 at 220 thousand barrels/day.

That’ll push total Guyana production towards 560 thousand barrels/day. As we’ll see throughout this article, the continued progression of the company’s projects in these difficult times highlights how undervalued the company is.

That means consistent production attributable to Exxon Mobil will be ~400 thousand barrels/year. Assuming no cost improvements, and a continued $25/barrel cost basis, along with $45 Brent (just a hair above current prices), that means almost $3 billion in annual profits for 120 years. That would value this business at ~1/3 of the company’s market capitalization.

However, this highlights the strength of the business.

Another major business for the company is its continued Permian Basin developments.

Exxon Mobil has a resource base of 10 billion barrels in the Permian Basin. As it ramps up towards a target of 1 million barrels/day in production, that represents a nearly 30-year reserve life and a significant part of the company’s production (more than 20%). The company expects to be able to sustain its development pace, with the overall assets, into 2040.

Exxon Mobil expects to lower production costs to $15/barrel. WTI prices are just a hair over $40/barrel. Assuming a slight increase to $45/barrel, that’d mean $30/barrel in profits. At 1 million barrels/day of production, that means the potential for $10 billion/year in annual profits from this business. That more than justifies the company’s valuation.

The company has continued to lower costs and improve production as it moves towards improved operations. This massive development highlights the strength of Exxon Mobil versus its oil competitors, how the company can simply enter an industry and dominate, achieving a scale no one else can.

Past this, Exxon Mobil has numerous other exciting projects. The company is entering LNG is an enormous way, with Mozambique LNG. In PNG, the company is also working on its LNG portfolio. The company sees the ability to generate more than 20 MTPA from its various stakes in businesses here, as it spends billions on development.

The company also has more than 2.5 million acres off the coast of Brazil. It is the operator in the majority of its acreage. Brazil and LNG are comparable projects near Guyana and the Permian Basin, although not as developed. These projects can support Exxon Mobil. 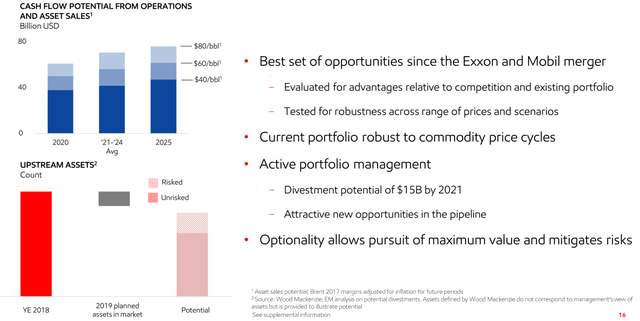 Exxon Mobil’s cash flow matters; the above graph shows the company’s forecast from a pre-COVID-19 world, back when it was anticipating more than $30 billion in annualized spending. It’s worth highlighting here that the company has the ability to continue paying the capital spending even at $40/barrel oil.

Let’s assume COVID-19 delays the company’s plans by 1-2 years. That’d point to 2027, at $60/barrel, FCF of roughly $30 billion. Given the company’s market capitalization of less than $150 billion, that would mean a market cap to FCF ratio of just under 5 with a long-term recovery in oil prices. That 20% FCF yield that’s continuing to fund growth is incredibly significant.

Exxon Mobil continues to have significant risk from the markets that it operate in, but undefeatable FCF and the ability to reward shareholders.

Let’s put this all together to take a look at Exxon Mobil’s debt and financial picture.

Exxon Mobil has dramatically increased its liquidity since the start of the COVID-19 related oil crash in order to better position the company. The company has also lowered capital expenditures and operating costs. At this time, the company has more than $10 billion of cash and $15 billion in revolving credit facilities.

Exxon Mobil has managed to issue this debt at a great yield. The company’s 10.5 year bonds issued during COVID-19 came at a ~2.6% yield. That’s an incredibly manageable yield for the company with a multi-billion dollar issuance. Exxon Mobil has nearly $70 billion in LT debt with its less than $15 billion in cash. However, its interest payments are ~$2 billion annually.

That’s incredibly manageable for the company. It also means that the company has significant growth opportunities, should it choose to grab them. It can issue additional debt to acquire other undervalued companies.

Exxon Mobil’s risk is the chance of a continued drop in oil prices. While the company can see earnings increase by $1.8 billion in 3Q 2020, due to COVID-19 and the related price collapse, it could also see the price recovery reverse. That could place the company in a much more difficult position. That position is one that might force more spending cuts.

It could potentially also cause the company to cut spending even further, delaying long-term cash flow. While Exxon Mobil has a market leading portfolio of assets, the company continues to face the commodity price risks of a commodity it does not control.

Exxon Mobil has an impressive portfolio of assets that it is continuing to work towards development. The company has a number of unique opportunities that have the potential for decades of significant production. The company could have millions of barrels of low cost production/day that could provide significant FCF.

Disclosure: I am/we are long XOM, CVX. I wrote this article myself, and it expresses my own opinions. I am not receiving compensation for it (other than from Seeking Alpha). I have no business relationship with any company whose stock is mentioned in this article.