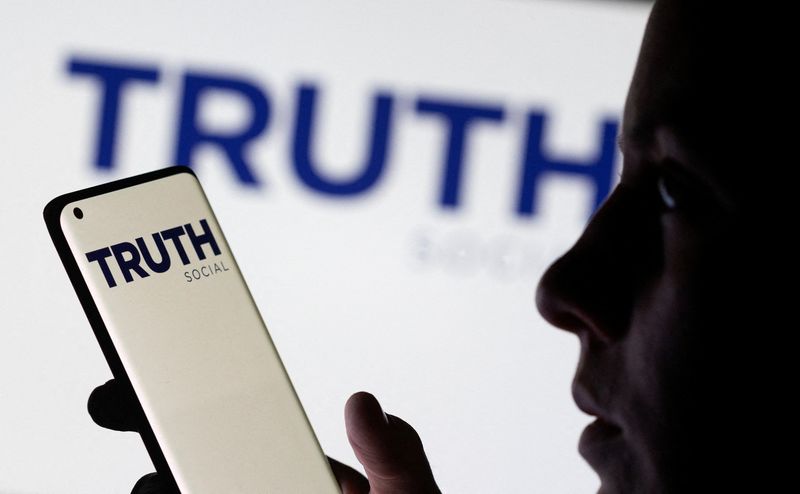 By Helen Coster and Julia Love

(Reuters) – The two Southern tech entrepreneurs had the two qualities that Donald Trump’s Truth Social startup needed: tech-industry expertise and a politically conservative worldview aligned with the former president, a rare combination in the liberal-leaning industry centered in San Francisco.

Josh Adams and Billy Boozer – the company’s chiefs of technology and product development – joined the venture last year and quickly became central players in its bid to build a social-media empire, backed by Trump’s powerful brand, to counter what many conservatives deride as “cancel culture” censorship from the left.

Less than a year later, both have resigned their senior posts at a critical juncture for the company’s smartphone-app release plans, according to two sources familiar with the venture.

The departures followed the troubled launch of the company’s iPhone app on Feb. 20. Weeks later, many users remain on a waiting list, unable to access the platform. Trump Media & Technology Group (TMTG) Chief Executive Devin Nunes, a former Republican congressman, said publicly that the company aimed to make the app fully operational within the United States by the end of March.

The company has an app for iPhones but no app for Android phones, which comprise more than 40% of the U.S. market, though the company has advertised seeking an engineer to build one.

This account is based on Reuters interviews with eight people with knowledge of Truth Social’s activities, all of whom spoke on condition of anonymity.

Truth Social is part of a growing sector of tech firms catering to conservatives and marketing themselves as free-speech champions. The platform promised to give Trump unfettered communication with the American public more than a year after he was kicked off Twitter (NYSE:), Facebook (NASDAQ:) and YouTube for allegedly inciting or glorifying violence during the Jan. 6, 2021, riots at the U.S. Capitol.

The exit of two executives critical to the app-launch efforts could imperil the company’s progress as it tries to prove it can compete with mainstream platforms such as Twitter, said two people familiar with the company. Like Twitter, Trump’s platform offers users the chance to connect and share their thoughts.

“If Josh has left… all bets are off,” one of those sources said of tech chief Adams, calling him the “brains” behind Truth Social’s technology.

Another source familiar with the venture said that Boozer also had a major leadership role as product chief, running management across technology infrastructure, design and development teams.

Reuters could not determine the specific circumstances behind the executives’ resignations, or whether they have been replaced or their duties reassigned. It also remains unclear whether Adams and Boozer still work on the venture in a different capacity after quitting their executive posts.

Their resignations came before their key roles in the closely watched company were even publicly known outside of Truth Social’s secretive culture.

Adams and Boozer worked at a level just below Wes Moss and Andy Litinsky, both former castmates on “The Apprentice,” Trump’s hit reality TV show, according to a source familiar with the venture.

Moss and Litinsky have been the “senior, day-to-day leadership” running the company since it started last summer, the source said. The two men had pitched Trump on the social-media venture in January of 2021, according to a person familiar with the company’s founding.

Reuters could not determine the specific job titles or responsibilities of Moss and Litinsky, neither of whom responded to requests for comment. TMTG has released little information about its executive leadership team outside of CEO Nunes, who joined in December.

Another open question is how TMTG is funding its current growth. The company is planning to go public through a merger with blank-check firm Digital World Acquisition Corp (DWAC). The deal is under scrutiny by the Securities and Exchange Commission and is likely months away from being finalized.

DWAC disclosed in a regulatory filing last December that the SEC was probing the deal. The SEC has not addressed the nature of the inquiry and did not respond to a request for comment on Sunday.

Investors have pledged $1 billion to TMTG but they won’t hand over that money until the DWAC deal closes.

Trump’s level of involvement with his namesake company and the Truth Social platform also remains unclear. The former president so far has written only one post – or “truth” – on the platform, writing on Feb. 14: “Get Ready! Your favorite President will see you soon!”

Downloads of the Truth Social app have declined precipitously, from 866,000 installations the week of its launch to 60,000 the week of March 14, according to estimates from data analytics firm Sensor Tower. The firm estimates the Truth Social app has been downloaded 1.2 million times in all, trailing far behind rival conservative apps Parler and Gettr at 11.3 million and 6.8 million installations, respectively.

When they joined the company last year, Adams and Boozer embraced the vision for a social-media company with an “anti-cancel culture” mission, according to one of the sources familiar with the venture. The executives believed deeply in creating an “open platform, where as long as you don’t say anything that is criminal,” the person said, “you can be entitled to your own opinion.”

Reuters could not determine the exact date the two executives joined the firm, but they were working on the Truth Social app by the fall, according to two sources familiar with the venture.

As the company sought engineers that had both the requisite skills and compatible politics, Adams and Boozer fit the bill, another person familiar with the company said. To gauge whether potential recruits were a good fit, hiring managers explored candidates’ political ideology, in at least one case by scanning their social media profiles and listening to their appearances on podcasts, that person said.

The company’s political bent limited its hiring pool. At least one candidate rebuffed a recruitment overture, saying he couldn’t stomach working for Trump, the person familiar with the company said. Others who rejected the company’s outreach said they were concerned about job security and feared the company and its employees might be prime targets for hackers, according to two people with knowledge of the firm’s recruiting efforts.

Adams is a “constitutionalist” who believes in strict interpretation of the authors’ original intent for the foundational U.S. document, said one of the people familiar with company operations. In May 2021, Adams filed a lawsuit in federal court in Alabama against the state’s governor, a Republican, and its health officer, alleging that the state’s mask mandate during the coronavirus pandemic violated the U.S. and Alabama Constitutions. The case was dismissed in June 2021.

Boozer, also a political conservative who previously lived in Alabama, had collaborated frequently with Adams before joining Truth Social, according to the source. With Adams in place to steer the back-end infrastructure of the app, Boozer brought a strong command of the front-end technology that touches users, according to that source.

The pair kept a low profile despite holding high-ranking positions at the closely watched venture.

Neither Adams nor Boozer disclosed their work at Truth Social on their LinkedIn profiles, which list numerous other jobs and ventures from their past. The company did not publicly announce their hiring.

Adams’ and Boozer’s roles were listed in a November investor presentation as the TMTG technology team’s chief technology officer and chief product officer – but without their last names. When Truth Social launched, they posted frequently on the platform, but again presenting themselves to the public only as “Josh A.” and “Billy B.”