Restaurant stocks in general have been pounded in the last few months as the very business model they’ve previously operated with has been called into question. Some stocks have regained much of their lost ground, but others haven’t. In the case of casual dining chain Red Robin Gourmet Burgers (RRGB), that lack of recovery is entirely deserved.

I’ve been bearish on Red Robin for some time, as I’ve found the company’s lack of growth prospects and absurdly high valuations to be quite off-putting. Given the fact that the company is suffering along with the rest of the industry, that really hasn’t changed. However, even at $10 per share, I still think Red Robin is overvalued and has further to fall, despite the fact that in recent weeks it has nearly been cut in half again.

Obviously, the crisis has put countless businesses on the proverbial ropes because it shut down large portions of the economy unexpectedly. Red Robin reacted quickly, as you’d expect, and has made some progress toward normalization.

This includes efforts to push off-premise sales because that was the only option in place for months to generate revenue. Red Robin had previously invested in off-premise capabilities, and those have been tested – and passed the test – in recent months.

In addition, the company has begun to open its restaurants back up and, at the beginning of June, had about two-thirds of its fleet open and operating at reduced capacities. Red Robin also has ample liquidity to weather the crisis, but that won’t help when it comes time to start generating earnings again. Indeed, this is where the company runs into trouble, in my view.

First-quarter results, as seen below, were predictably horrendous. 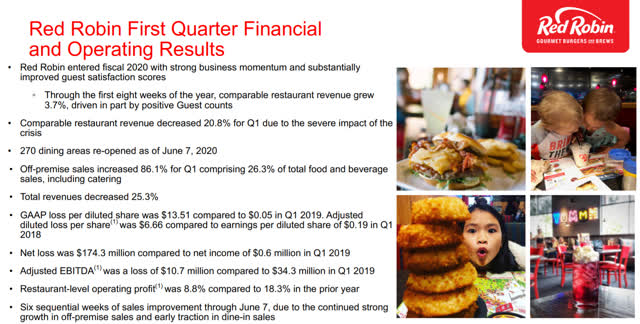 The company posted a comparable sales decline of 20.8% for the first quarter, although for the first two months of the quarter – prior to the shutdown – comparable sales were tracking at +3.7%. Off-premise sales nearly doubled in Q1, which is something we’ve seen from other restaurant chains as well as a once-small portion of the business became the only business. Still, this was nowhere near enough to offset the dining rooms being closed, which was and remains the core of Red Robin’s business.

Adjusted EBITDA was -$10.7 million in Q1 against $34.3 million in the year-ago period due to massive deleveraging of fixed costs due to loss of revenue. Some of that will come back if/when revenue returns to former levels, but the fact is that Red Robin wasn’t in great shape before the crisis, and this isn’t going to help.

Indeed, if we look at the past two years of comparable sales data, while there was a fractional improvement in the back half of 2019, results show that Red Robin has struggled for some time. 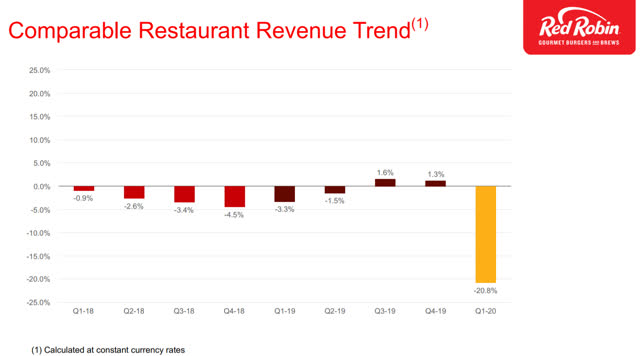 The company posted six consecutive quarters of negative comparable sales, followed by diminutive rebounds in late 2019. Obviously, comparable sales will be extraordinarily negative this year, but the key is how much they rebound into 2021. Given that Red Robin has been so weak for so long in terms of generating revenue improvements, color me skeptical that it will find a way to come flying out of this crisis and quickly replace its lost revenue. Companies that struggle heading into a crisis typically aren’t the ones that rebound out of the crisis the strongest; I fully expect Red Robin to continue to underperform the industry, because that’s what it’s been doing for years.

As I mentioned, Red Robin’s growth has been essentially nonexistent for years, as we can see below.

Revenue peaked in 2017 and fell in each of the past two years. Expectations are for a nearly-30% decline this year to ~$950 million, followed by a rebound into next year of ~$210 million to $1.16 billion. That’s fine, and I could see this scenario under a full reopening of the economy, but keep in mind, 2021 would still be ~12% below last year’s revenue and ~17% below 2017’s revenue. In other words, Red Robin looks poised to struggle to regain former levels of revenue, according to analysts, which is the point I was making above. The company was struggling before the crisis, and this won’t make things easier.

On the bright side, Red Robin is seeing gradual improvement in comparable sales as its dining rooms reopen. 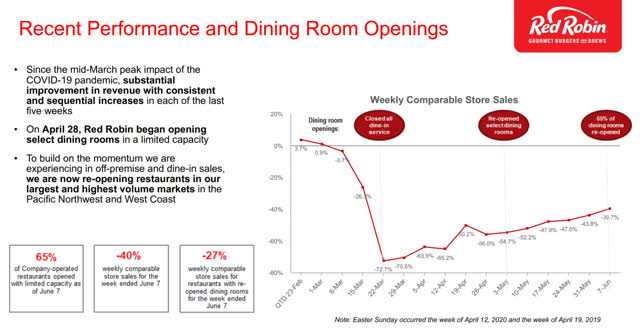 The issue is that improvement has been very slow, and because Red Robin was struggling before, how will it perform now that tens of millions of Americans are newly unemployed? Customers that were on the margins before the crisis may have lost one or more of the jobs in their household, and therefore, wouldn’t necessarily be interested in things like eating at restaurants. The whole industry will suffer for this, but given Red Robin’s tenuous hold on producing flat comparable sales numbers before the crisis, I have to think the company will be worse off when we finally start to emerge from it.

The biggest problem I’ve had with Red Robin is best summed up in the chart below.

Earnings have declined at a rapid pace in the past several years, falling from $3.32 in 2015 to just $0.62 last year. The really interesting thing is that Red Robin’s perennial underwhelming earnings performances are set to continue, according to analysts’ estimates.

If you look at next year and the year after, Red Robin is still expected to be posting significant losses. This comes as no surprise, because the company’s revenue and earnings have been weak for years, so a crisis of this magnitude would understandably set it back even further.

I think Red Robin is in a lot of trouble when it comes to recovering from this crisis. A loss of revenue may prove to be permanent because of the damage done to the economy from COVID-19. While stronger restaurant chains may emerge as strong or stronger than they were, Red Robin looks like it will continue to struggle. As a result, even at $10, the stock is a Sell.

Before, investors at least had declining earnings with which to value the stock, but today, with losses projected for years to come, that is no longer possible. You have to ask yourself if you want to own a stock that has little to no hope of producing any sort of earnings in the coming years. With comparable sales struggling before the crisis and the crisis set to make that worse, I don’t see a path forward for Red Robin’s earnings.

A company that has posted substantial earnings declines for years and looks poised to begin posting losses is not for me, and if you want to own a restaurant stock, this is not the one to buy.

For an investor, it is always a great pleasure to find an almost perfect company that was previously overlooked. After carefully examining the fundamentals of Rollins, Inc. (NYSE:ROL), a pest and termite control firm, I […]