My first article on the company, “Europris: 7% Yield On Groceries Only Found In Norway“, argued that the company was appealing from a valuation standpoint. I added a stake in Europris (OTC:ERPSY) at this time. In a short time, valuation grew and I enjoyed the benefits of multiple expansion as a result of the quarterly released on November 1st, 2019 (with FY19 slated to be released in a week).

The ADR chart doesn’t really do Europris’ recent share price development justice – so let me go to a local, Oslo-based one.

This represents a 24.71% return since the time of the article, coming to 141.88% annualized. This article will primarily go into two questions:

First, what was the reason for this multiple expansion/short-term growth?

Second, is the company now fairly valued, or is there still potential for further expansion in today’s share price/valuation?

As I said in my initial article, the expectations for the Europris IPO were pretty high, and because of the price and what was being offered, I elected to stay back – which turned out to be the right thing to do.

Since that IPO, however, and perhaps most relevantly over the past year or two, the company has changed things up and, more importantly, has been attractively valued compared to what it actually has (provided that the trend turns overall positive).

So, here’s the third quarter: 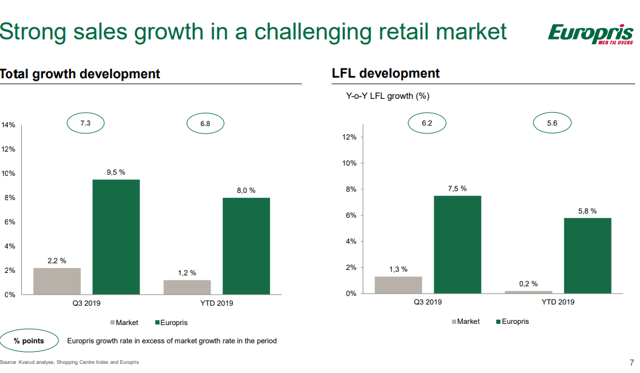 It’s, in other words, not tricky at all to understand just why the company is outperforming in terms of its share price. Europris now trends to vastly outperforming overall market indices (local ones) on a quarterly basis. This dispels some of the short-term fears that naysayers had about the company. This sort of outperformance during a heavy CapEx stage isn’t coincidental – the company is tightening its grip on things, and things are going according to guidance.

What do I mean by that?

Well, first of all, the Central Warehouse is progressing according to plan, and efficiency is already up. The automation of the high-bay areas is the next step, with testing already completed in 3Q19, and an operational start-up planned for 1H20 – pretty much within the next few months.

Transitionally speaking, the company is ready to begin moving things over to the new central warehouse. Company leases for other logistics centers have already begun to expire, and the operations are up and running within 1H20 – with automated shuttle solutions slated for the next year of 2021.

That pretty much covers the company improving its cost positions and margins, as well as giving it the ability to further provide competitive pricing, given the savings the central warehouse and automation will ultimately bring.

The company is still in a growth period as well, with six new Europris stores opened during 2019, with another 5 in the pipeline for 2020.

This may not sound like much to an outsider, but when you’re represented across large parts of a country like Norway already, which doesn’t have that many larger towns/communities, every single store opening is a big deal.

Perhaps most importantly during the quarter, apart from the massive earnings increase, the company is getting OpEx under control. 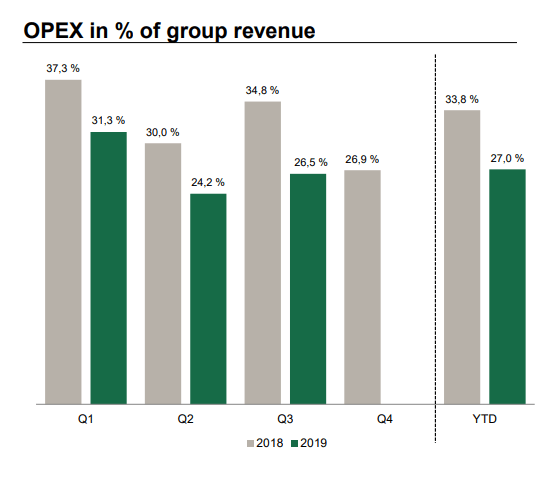 Secondly, and close to the importance, the capacity constraints during the transitional period of building/implementing the central warehouse combined with expiring leases have been temporarily resolved. The company still has an excess of seasonal inventory on the books that need be resolved – but a big part of those products are non-perishables (a large part of Europris offerings aren’t FMCGs) which have a much longer shelf-life than a year. This means they can be sold during the same seasonal period in 2020.

The company is still struggling with “basic” logistics (I’m not implying that even basic logistics are “simple”), meaning estimating the accuracy of supply/demand on the corporate level, but new methods are being implemented to bring up the accuracy here. 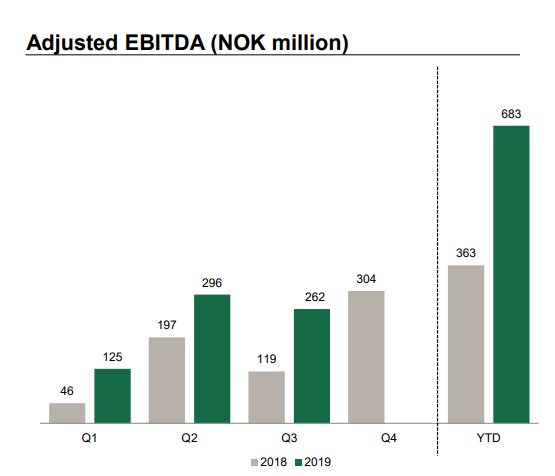 With results like this for the quarter, it’s no surprise that EBITDA is through the roof YoY.

So, in the end, what can be said about Europris in its current position?

Well, Europris and discount retailers are thriving in Norway. The company is the undisputed #1 in its segment in the small, Scandinavian nation, and it has improved its position through sourcing partnerships (mentioned in the last article), as well as its ongoing ambition to centralize and automate logistics, much like other companies in the same sector.

This will grant the company further cost-side advantages in the long run. The goal is the transformation of Europris into an omnichannel retailer through increased e-commerce and e-CRM.

The company has proven operational excellence through the quarter, as well as being able to deliver on its warehouse goals. Combine this with the mid-range double-digit income increase, and you have a recipe for valuation metric expansion such as the one we’ve seen.

So where is the company in terms of its price?

To own Europris at this time as it’s recovering from 2018-2019 lows, you’re paying a P/E of about 14.5X based on current company EPS. I already went through some of the basics in the initial article – all of the positive fundamental signs are here.

What’s more, the company is a mixed discount retailer, currently trading at a 14.5X at times when Swedish competitors Axfood (OTCPK:AXFOF) and ICA Gruppen (OTC:ICCGF) are approaching earnings multiples of 25-30X. That alone makes it cheap compared to public comps. 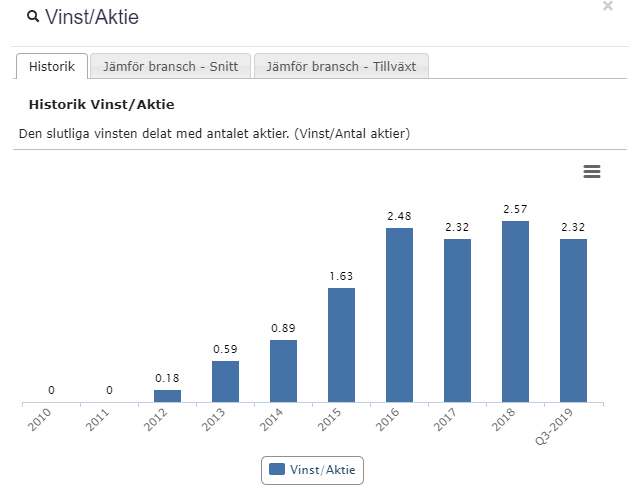 And once again – in terms of the fundamental values we look for, Europris has done a good job of growing shareholder value over the years, even if the stock price is just now about to catch up.

The company is showing all the right trends in terms of its numbers and on the balance sheet. What’s more, valuation in terms of P/E, P/S, and P/BV are all touching some pretty low levels – not 2018-2019 level lows, where the P/E was closer to 11-12X, but still comparatively cheap.

The risk is certainly higher, given the company’s relatively young age – but the dividend yield in this climate is well above the norm, currently coming in at 5.5% despite recent multiple expansion.

The company’s long-term earnings growth trends put a fair value on par with the market as a whole – around 15X earnings or so. That means that at current levels, Europris could be considered slightly undervalued on the basis of growth trends and expectations. I see the comparatively high yield and still-low price to make up for the risk you’re taking investing in a company that’s relatively new.

S&P Global expectations for the 2019 EPS is to remain somewhat flat/unchanged or perhaps even decline somewhat, dropping back down to ~2.3 NOK/share, and pick up again in 2020 (when EPS picks up again as well, expected to increase 20.3% in 2020) (Source: TIKR.com)

At current expected EPS, the company trading at 14.5 times FY19 EPS and at around 12 times 2020E EPS, if expectations turn out to be somewhat accurate. As I view it, this means that Europris is still being traded at a very appealing price with a good yield (yield of 5.8% of 2020E dividend), provided that the company continues to deliver.

This brings us to the company risk section, which does bear mentioning.

There are a few significant risks to the company which I do need to mention again. On the face of it, Europris looks pretty damn good. A company in a high-moat/barrier market, at a #1 market position with excellent trends and generous dividends.

One, their company debt has almost doubled from 2018 due to the warehouse expansions and other items. Much like Axfood, Europris will spend the coming years handling its debt and interest payments. This could compress margins/profits if interest rates were to shift – as they seem to be wanting to do.

Two, Europris’s generous dividend policy is balanced on the tip of a spear. At 1.85 NOK/share, the company is paying just north of 80% of company earnings. This is a number that I consider to be too high for comfort, especially considering Europris’ debt position. That means that anyone buying here should, as I see it, be prepared for the eventual risk of a dividend cut.

Sweden does not have the combination of discount retailer and grocer which Europris represents – at least, it does not have a company of its like that’s publicly traded. If there was one, I’d probably invest, but I also wouldn’t compare it blindly to your standard, typical grocers – it’s not. The product mix is different and comes with a different risk profile.

While the risk profile is different, I view the risk well-calculated in the current share price. Back at IPO levels, the valuation for Europris was insane. In 2015, the company demanded a price of 25X in terms of earnings for its shares. This, as I see it, should never be paid for the company.

Since then, valuation has come back down to earth, bottoming at ~10.5X in 2018. Obviously, Europris is worth far more than 10 times earnings if it maintains its earnings and a decent rate of earnings growth while continuing to grow the business and paying down its now-large position of debt. Equally obvious, I wouldn’t want to pay 25 times earnings for a discount retailer/grocer – even a Norwegian one.

At current valuation, however, Europris can certainly be argued to be trading at a discount to public comps and potential future valuation. This makes the company an interesting investment, as I see it. It’s not as risk-conservative as its peers given its limited age and product mix, which includes non-FMCGs, something I’m typically very leery about (I rarely invest in retailers of clothing/electronics/hardware/the like given I see a fundamental future uncertainty in how sales and sales channels are processed logistically and I’d rather own the manufacturers – as a rule). But every company has a “good” price.

Buying Europris at this sort of discount to peers with a positive trend that seems likely to continue is, as I see it, a “good” price.

This means that despite the risk that are apparent, and which need be considered, I maintain my current “BUY” and “Bullish” stance and continue to expect further multiple expansion due to future potential efficiencies.

Thank you for reading.

Europris remains a “BUY” with a “Bullish” outlook due to the potential of future multiple expansion from future sales growth and as logistical efficiencies start to come online.

Disclosure: I am/we are long ERPSY, AXFOF, ICCGF. I wrote this article myself, and it expresses my own opinions. I am not receiving compensation for it (other than from Seeking Alpha). I have no business relationship with any company whose stock is mentioned in this article.

Additional disclosure: While this article may sound like financial advice, please observe that the author is not a CFA or in any way licensed to give financial advice. It may be structured as such, but it is not financial advice. Investors are required and expected to do their own due diligence and research prior to any investment.

ansonsaw Income investing is a rewarding journey that I don’t take for granted. Its many rewards include the ability for one to balance their household expenses with a recurring and passive income stream. Extra income […]

LumerB I am probably one of the biggest cheerleaders of real estate investment trusts (“REITs”) (VNQ) on Seeking Alpha. I believe that they offer the best risk-to-reward because they essentially allow you to invest in […]