Euronav (EURN) finished 2019 with its best result in years. The fourth quarter showed a profit of USD 160 million, and CEO Hugo De Stoop said in an earnings teleconference that “the first quarter of 2020 is so far even stronger than fourth quarter of 2019. We have booked around 60 percent of the quarter at close to USD 90,000 per day for the VLCC and USD 57,000 per day for our suezmax.”

However, he acknowledged that “the sentiment has shifted for the moment, much because of the outbreak of the respiratory virus, the coronavirus, in China. The full macroeconomic impact is still being assessed at the moment,” he said, though noting that current daily rates at around USD 45,000 remain strong compared to previous years.

“No matter what the rest of the quarter will be, it will be a great Q1,” said De Stoop, adding that the underlying factors driving the market are stable. 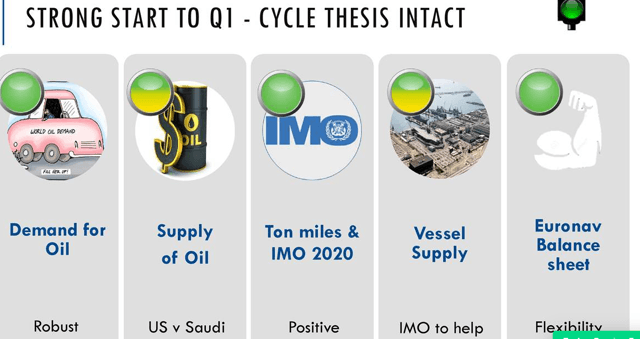 One day later on January 31st, the U.S. decided to lift the sanctions it had imposed on China’s COSCO Dalian shipping unit that were imposed September 25th for transporting Iranian crude. The number includes 26 VLCCs. The sanctions had instantly sent rates soaring, and there were reports that a single ship had been chartered at around USD 300,000 per day. 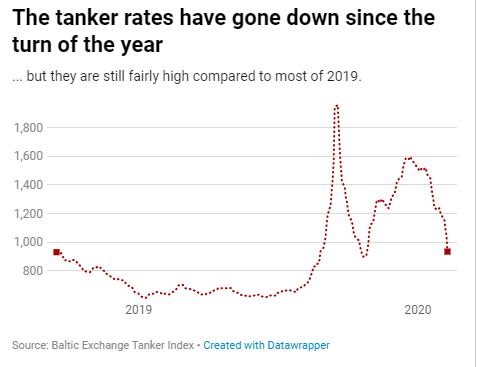 And EURN’s stock price spiked as a result of an event no one had predicted…. 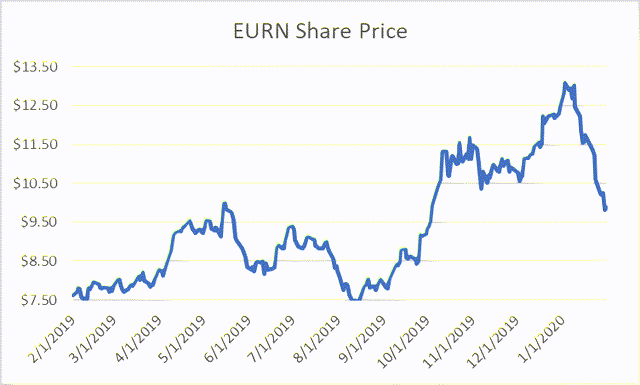 …Ending the year up about 65 percent. 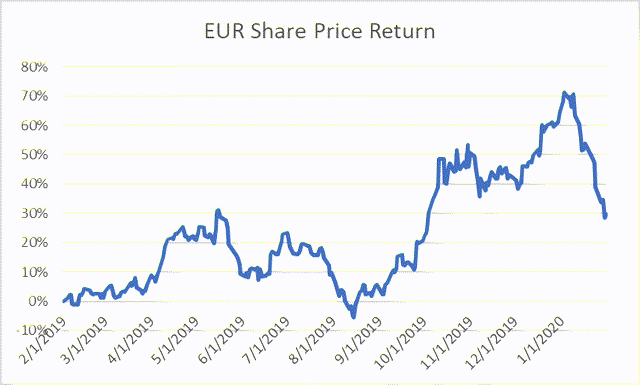 Clarksons predicted that lifting the sanctions would result in a reduction in VLCC rates of $10,000 per day. And according to Poten & Partners, the rate did fall nearly that amount between Friday and Monday.

Freight rates for supertankers on the Mideast Gulf and U.S. Gulf routes to Asia have fallen to their lowest since mid-September as the coronavirus outbreak hit Chinese demand,” ship brokers told Reuters.

The market has gone back to what it was before the COSCO sanctions came in. All the other variables have gone away, such as IMO 2020 congestion at ports, movement of low-sulphur fuel and industrial action in Europe.” 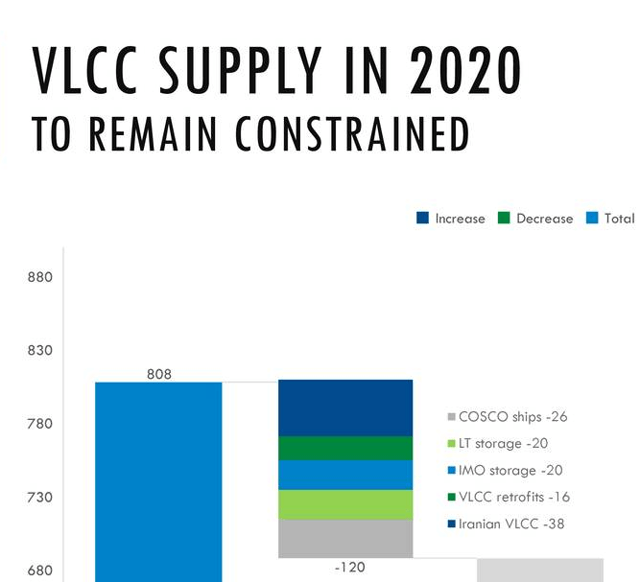 VLCC supply is no longer constrained. China’s oil demand may have dropped 20 percent, or 3 million barrels per day, according to Bloomberg’s report. Petroleum products are in oversupply, forcing refiners to reduce run rates or close down completely. Sinopec Group, the nation’s biggest refiner, is in the process of reducing runs at its plants by an average of about 13-15% and will review whether further cuts are needed February 9th. Executives estimated that China’s refiners will cut runs by 15 to 20 percent.

That means a big reduction in crude imports and demand for the tankers to deliver it. “The Wuhan coronavirus spreading from China is now likely to become a pandemic that circles the globe, according to many of the world’s leading infectious disease experts,” the New York Times reported.

Just last Thursday Mr. De Stoop remarked, “The impact is definitely uncertain. In the short-term, it’s negative, certainly not positive. But that’s in the short-term. In the long-term, I guess that everybody’s convinced that it will be contained.”

Euronav’s guidance last week for the tanker market and outlook for its stock have been completely upended. With tanker rates dropping to pre-Cosco sanctions, it appears likely EURN’s share price will share the same destiny.

On January 15th, I wrote an article, Contrarian Play On Shipping Names: Euronav. My thesis is that Euronav did not take into account a likely reversal of the factors that had led to the spike in rates, and gambled on its thesis for continued high rates instead of locking them into the extent possible for the quarter and term rates for a year or longer.

And many investors missed the real reason for EURN’s price surge, the COSCO sanctions and other temporary factors. Therefore, a short position in EURN was justified.

To guide investors who are interested in profiting from outstanding opportunities in the energy sector, I provide a service on Seeking Alpha’s Marketplace oriented toward individual investors, Boslego Risk Services. A long/short Model portfolio is continuously updated, along with on-going analysis of the oil market.

I am now accepting new members to Boslego Risk Services and invite you to sign up. There are monthly and annual pricing options as described here. You may also read reviews posted by members here.

Disclosure: I am/we are short EURN. I wrote this article myself, and it expresses my own opinions. I am not receiving compensation for it (other than from Seeking Alpha). I have no business relationship with any company whose stock is mentioned in this article.