The Australian Dollar shrugged at softer-than-expected Chinese Caixin PMI data for January and Reserve Bank of Australia Governor Philip Lowe’s speech in Sydney. The head of the central bank said the coronavirus is a new uncertainty but that it is too early to tell what its economic impact will be. Mr. Lowe also stressed that higher unemployment figures will bolster the case for additional rate cuts.

The Euro may rise on retail sales figures for December if the statistics show a buoyant consumer during the holiday-packed month. The year-on-year forecast is at 2.3 percent, marginally higher than the prior 2.2 percent print while its month-on-month counterpart is expected to show a 1.1 percent contraction; the previous was 1.1 percent. However, that’s not the only economic data release that traders will be paying attention to.

Final figures for the Eurozone Markit services and composite PMI for January will also be released, though their readings may erase gains the Euro made on retail sales statistics. The outbreak of the coronavirus and subsequent selloff in equities amid concerns that it may slow economic growth could have led to supply chain managers revise down their outlook on future demand.

Fear about the coronavirus has already made a dent in market expectations for future inflation. The Euro 5Y5Y inflation swap forward – a favorite price growth gauge of the ECB – endured a four percent decline as fear about a coronavirus contagion swelled. The volatility-inducing nature of these concerns could start waning, but if it starts impacting economic data, the Euro may fall if it stokes ECB easing expectations.

While the release may not necessary elicit of a significant amount of volatility, it no less warrants the attention of traders. Eurozone debt and fiscal rules have long been disputed by member states – like Italy in 2018 – who then attempted at pioneering fiscal exceptionalism and subsequently imperiled the Euro. With growing frustration towards the lack of fiscal autonomy, policymakers will discuss a restructuring of debt rules.

The publication by the EC will essentially be a review of economic policies that were implemented during the Eurozone debt crisis known as the Two Pack and Six Pack reforms. Policymakers are raising these issues out of concern that in the face of an economic downturn, a recovery may be comparatively more difficult with interest rates in negative territory and member states verging on violating fiscal deficit laws.

While EUR/USD has broken out above the December 31 descending resistance channel (labelled as “beta”), the pair appears to be struggling to consistently trade above it. Furthermore, EUR/USD is still hovering on the cusp of support at 1.1039 which opens the door for another re-test of the November swing-low at 1.0989. It is also still possible that EUR/USD resumes its prior decline under the steep guidance of the Beta downtrend. 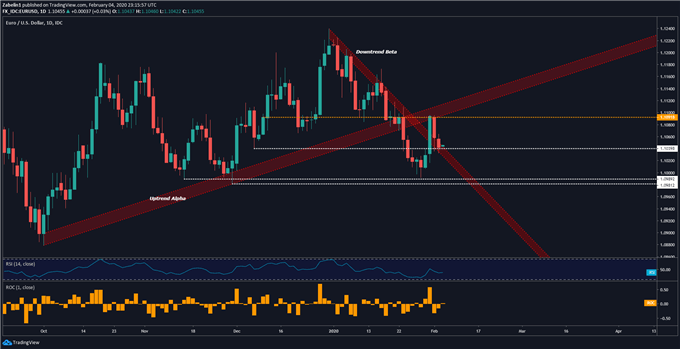