Asia-Pacific equities were mixed but markets overall appeared unable to escape the bearish overhang from fear about the spread and impact of the coronavirus. South Korea – a key node in the region’s technology supply chain – reported an additional 52 cases of the Wuhan virus, bringing the total to 156. This came as BoJ Governor Haruhiko Kuroda said the central bank would take appropriate measures to counter the effect of the virus.

The Euro may extend its decline vs the US Dollar if preliminary PMI data for February stokes recession fears as analysts forecast a slowdown in Germany, the largest Eurozone economy. Manufacturing is anticipated to remain in contractionary territory at 47.4 – below the prior release at 47.9 – with the services component expected to show a 52.3 reading.

If the statistics underwhelm it could stoke ECB rate cut bets and further pressure the Euro against its major counterparts. EUR/CAD has recorded its longest losing streak on record with 12 consecutive days of losses as EUR/USD trades in multi-year lows with further scope for downside price action. The Euro’s recent decline comes just as Eurozone growth was beginning to show signs of stabilization prior to the coronavirus outbreak.

The Director of the IMF Kristalina Georgieva recently sent a chilling message about COVID-19 and the potential it has to derail global growth that was already being strained by geopolitical tensions. She said it is the most pressing uncertainty facing the world economy and is a “stark reminder of how a fragile recovery could be threatened by unforeseen events”.

US DOLLAR MAY EXTEND RALLY ON US PMI REPORTS

Conversely, the US Dollar may rise on local preliminary PMI data for February and further amplify gains in the Greenback following the release of the FOMC minutes. As forecasted, the Fed text was a bullish catalyst. Manufacturing data is anticipated to show a 51.5 print, a welcome change of pace after months of contractionary figures amid the US-China trade war.

The services data segment is forecasted to show a 53.4 print, unchanged from the prior period. This comes after Fed Chairman Jerome Powell and several other central bank officials pointed to improved economic data. Some of these comments included characterizing the baseline outlook as “pretty darn good” and referring to the jobs portion of the economy as doing “quite well”.

In this optimistic environment, the US Dollar may rise on the expectation that improved economic statistics will buttress the Fed’s case to leave interest rates unchanged. Having said, monetary authorities have acknowledged the risks posed to the US economy from the spread and impact of the coronavirus – especially in regard to how it may influence China’s growth trajectory this year.

The US Dollar Index (DXY) surged to three-year highs after it surpassed the October peak at 99.67. The Greenback is also now trading above the January uptrend after it briefly broke below it in February and subsequently recovered. The upcoming data may amplify DXY’s gains as it advances against its G10 counterparts in a fundamentally favorable environment. 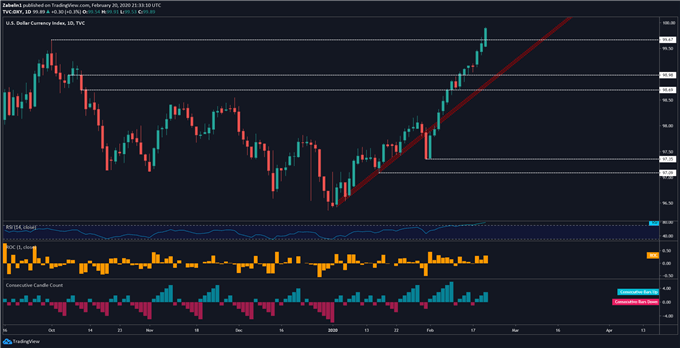 EUR/USD’s almost four-percent decline since December 31 appears to be showing signs of exhaustion as it cautiously hovers above the lower tier of the 1.0783-1.0828 support range. Given the upcoming fundamental catalysts, EUR/USD may have trouble surmounting the upper layer despite modest signs of trepidation in trading lower. However, even a short-term victory may be limited by the December descending resistance channel (labelled as “Beta”). 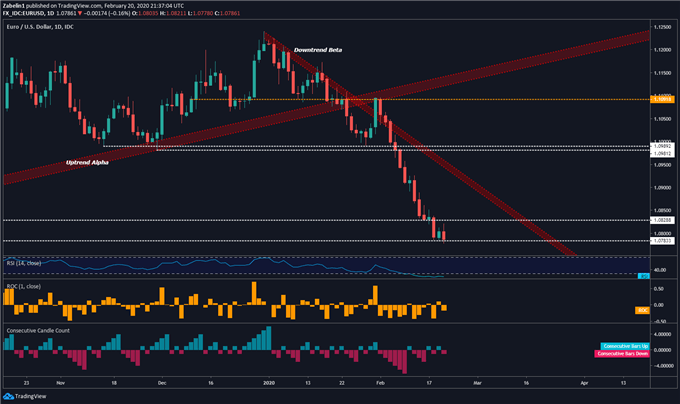