EUR/USD attempts to retrace the decline following the US Non-Farm Payrolls (NFP) report, but the semi-annual testimony with Federal Reserve Chairman Jerome Powell may drag on the exchange rate if the central bank head tames speculation for lower interest rates.

EUR/USD Halts Losing Streak Ahead of Fed Testimony But Will It Last?

EUR/USD bounces back from the monthly low (1.0942), with the exchange rate halting a five day losing streak, and recent price action raises the scope for a larger rebound as Euro Dollar fails to extend the string of lower highs and lows from the previous week.

However, the Humphrey-Hawkins testimony with Chairman Powell may keep EUR/USD under pressure as the Federal Open Market Committee (FOMC) appears to be in no rush to alter the monetary policy outlook.

In turn, Chairman Powell may endorse a wait-and-see approach in front of US lawmakers as the FOMC insists that the “current stance of monetary policy is appropriate to support sustained economic growth, a strong labor market, and inflation returning to our symmetric 2 percent objective.”

More of the same from Chairman Powell may spur a bullish reaction in the US Dollar as the central bank moves away from its rate easing cycle, and the FOMC may merely attempt to buy time at the quarterly meeting in March as “there are some signs that global growth may be stabilizing after declining since mid-2018.” 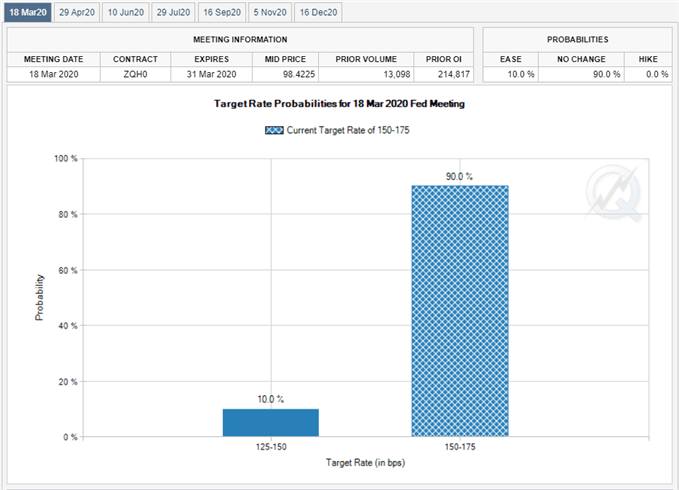 In fact, Fed Fund futures show a 90% probability the FOMC will keep the benchmark interest rate in its current threshold of 1.50% to 1.75% on March 18, and it remains to be seen if Chairman Powell and Co. will alter the forward guidance when they update the Summary of Economic Projections (SEP) as Fed officials see US interest rates on hold over the next 12 months.

With that said, the diverging paths between the FOMC and the European Central Bank (ECB) may continue to produce headwinds for EUR/USD as President Christine Lagarde emphasizes that the “Governing Council continues to stand ready to adjust all of its instruments, as appropriate, to ensure that inflation moves towards its aim in a sustained manner.”

As a result, EUR/USD may continue to give back the rebound from the 2019 low (1.0885) as it clears the November low (1.0981), but the exchange rate may stage a larger rebound ahead of the Fed testimony as it halts the series of lower highs and lows from the previous week.

© Reuters. By Liz Moyer Investing.com — Thanksgiving weekend flight travel culminated in the largest number of people passing through airport security checkpoints since the start of the pandemic, welcome news to hospitality industry companies […]

© Reuters. U.S. stocks mixed at close of trade; Dow Jones Industrial Average up 0.01% Investing.com – U.S. stocks were mixed after the close on Tuesday, as gains in the , and sectors led shares […]