Earnings of Essa Bancorp, Inc. (NASDAQ:ESSA) increased in the June-ending quarter to $0.37 per share from $0.33 per share in the March-ending quarter of 2020. The hike in earnings was mainly attributable to strong loan growth on the back of Payroll Protection Program loans. Further, broad-based expense control and gains on sales of loans drove the net income. Earnings will likely decline in the coming quarters because of higher provision expense and normalization of gains on sales of loans. Moreover, a decline in the net interest margin will pressurize earnings. Overall, I’m expecting ESSA to report earnings of around $0.30 per share in the September-ending quarter, which will bring FY20 earnings to $1.33 per share. The June 2021 target price suggests a high upside from the current market price. However, for the near term, I’m not expecting much price appreciation because of ESSA’s moderately high credit risk. Consequently, I’m adopting a neutral rating on ESSA.

ESSA’s provision expense surged in the third quarter of the fiscal year 2020 to $1.3 million from $0.5 million in the March-ending quarter of 2020. The company has not yet adopted the new accounting standard for credit losses that is based on expected losses, as mentioned in the third quarter’s 10-Q filing. Instead of the new expected loss model, ESSA is currently using the old incurred loss model to determine the provisioning requirement. Therefore, there is a chance that the provision expense will increase in the coming quarters as the COVID-19 pandemic will drive up credit loss events.

ESSA’s credit risk mainly stems from the large number of loans requiring accommodations. As of the end of June 2020, $178.6 million required modifications, representing 12.4% of total loans, and 13.1% of total loans excluding the Payroll Protection Program loans, according to details given in the third quarter’s earnings release. Considering these factors, I’m expecting the provision expense to increase in the September-ending quarter and remain elevated in the December-ending quarter. The following table gives details of loan modifications.

ESSA’s earning assets are concentrated in mortgage loans, which have longer maturities than the liabilities, as mentioned in the 10-Q filing. Therefore, the net interest margin, or NIM, did not take much of a hit from the 150bps federal funds rate cuts. According to details given in the 10-Q filing, the NIM declined by 18bps in the June-ending quarter. The remaining impact will likely be felt in the coming quarters when assets will reprice, while funding cost will remain sticky because most liabilities have already repriced. As a result, I’m expecting NIM to decline by a further 4bps in the September-ending quarter. For the fiscal year 2021, I’m expecting the average NIM to be 11bps below the average for FY20.

The forgiveness or repayment of PPP loans in FY21 will likely reduce the loan balance next year. On the other hand, low interest rates will likely boost demand in ESSA’s focus area of residential mortgages. Interest rates will likely remain low next year because the Federal Reserve has signaled plans to maintain rates at the current level through 2023, according to news reports. Considering these factors, I’m expecting loans to decline by 1.6% in FY21. The following table shows my estimates for loans and other balance sheet items. 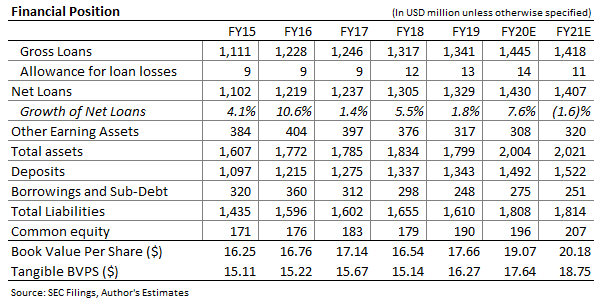 The elevated provision expense and NIM compression will likely pressurize earnings in the coming quarters. Further, the non-interest income will likely decline after surging in the third quarter due to gains on sales of loans. On the other hand, a recovery in fee income from deposit services will likely support non-interest income in the coming quarters. ESSA waived various retail deposit fees for 60 days in the third quarter to facilitate its customers, as mentioned in the earnings release. Overall, I’m expecting ESSA to report earnings of $0.30 per share in the fourth quarter, which will take the full-year earnings to $1.33 per share, up 13% from last year. For FY21, I’m expecting ESSA to report earnings of $1.18 per share, down 12% year over year. The following table shows my income statement estimates.

Actual earnings may differ materially from estimates because the uncertainty surrounding the pandemic can lead to surprises in the provision expense.

I’m using the historical price-to-tangible-book-value multiple, or P/TB, to value ESSA. The stock traded at an average P/TB multiple of 0.9 in the past, as shown below.

Multiplying the average P/TB ratio with the June 2021 forecast tangible book value per share of $18.6 gives a target price of $16.7 for the mid of the calendar year 2021. This price target is 27% above the closing price for September 18, 2020. The following table shows the sensitivity of the target price to the P/TB ratio.

Apart from the price upside, ESSA is also offering a modest dividend yield of 3.3%, assuming the company maintains its quarterly dividend at the current level of $0.11 per share. There is little threat of a dividend cut because the earnings and dividend estimates suggest a payout ratio of 37% for FY21, which is sustainable.

ESSA is currently facing moderately high credit risks due to the loans requiring accommodations. The chances of a negative surprise are increased by the fact that ESSA is using the incurred loss model to determine the provisioning requirement. In my opinion, the risks will likely keep the stock price subdued until risks decline to a satisfactory level. As a result, I’m adopting a neutral rating on ESSA.

Additional disclosure: Disclaimer: This article is not financial advice. Investors are expected to conduct their own due diligence, and consider their investment objectives and constraints before investing in the stock(s) mentioned in the article.

GBP price, Brexit news and analysis: GBP/USD continues to slide modestly lower as the EU-UK talks on a trade deal once the Brexit transition period ends keep going. However, no progress is likely before the […]