For years now, Energy Recovery (ERII) have been heavily distracted by the over-hyped promising of the future of its Vor-Teq technology for the fracking industry and the big deal with Schlumberger (SLB) to, supposedly, bring Vor-Teq from the research laboratory and into the field as an actual product that delivers revenue growth. But after a succession of CEO’s that weren’t able to live up to the bold promises, it’s time for investors to smell the roses. This company has always been about getting its patented PX exchanger technology deployed throughout the global desalination sector.

Proof of that statement is the recent order flow:

The most recent announcement was for a project that consists of three floating desalination stations with an aggregate water production capacity of 150,000 m3/day. The project is expected to be operational by the end of this year and will supply water to the Saline Water Conversion Corporation (“SWCC”) – a Saudi government corporation responsible for supplying fresh water to various regions in the Kingdom.

The July contract included to supply equipment for the 400,000 m3/day Al Jubail II SWRO facility. The Jubail II facility will not only replace the thermal capacity of the 136,000 m3/day Jubail I thermal desalination facility, but add addition capacity over and above Jubail I. This contract award validates ERRI’s technology as compared to the “old style” thermal desalination technique. Energy Recovery will supply several hundred PX® Pressure Exchanger devices to the Jubail II project developer Metito Overseas Ltd. – a global leader and provider of sustainable water management solutions. 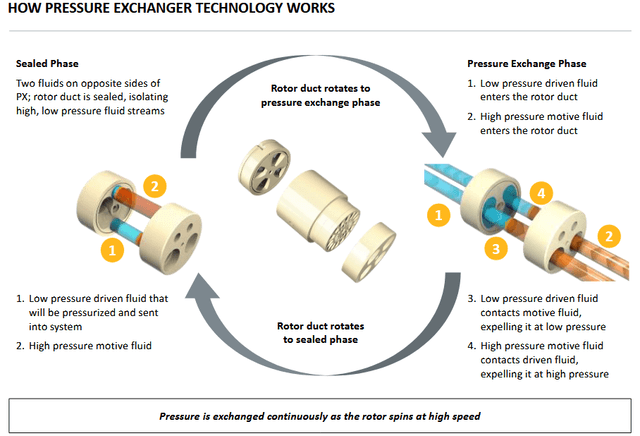 The $23.9 million March announcement – in aggregate the biggest contract in ERRI’s history -are for PX exchangers and related equipment and services to multiple desalination projects across the Middle East and North Africa. The equipment is expected to ship beginning in Q1 2020 and continue throughout the first half of 2021. These awards include the largest contract in ERRI’s history for the Taweelah Reverse Osmosis Independent Water Project (“Taweelah”), which will be the world’s largest SWRO facility once it goes into service.

Located near the city of Abu Dhabi, Taweelah will have a capacity of 909,200 m3/day – 44% larger than the world’s current largest SWRO facility. The facility is expected to be operational in late 2022 and will support both industry and public water demand. Taweelah will play a critical role in meeting Abu Dhabi’s peak water demand, which is expected to rise by 11% by 2024.

The Fracking Industry Has Been Fracked

Meantime, there have been no significant announcements of Vor-Teq sales and it was not surprising (at least not to me…) that the company finally announced an end to the exclusive licensing deal with Schlumberger in late June. It’s just as well. That deal missed its milestone targets from the very beginning and never did supply the fracking industry – during its huge growth phase – with Vor-Teq technology.

Now, with covid-19 demand destruction for oil causing low prices and severe cut-backs in shale drilling, the future looks bleak. Indeed, Occidental Petroleum (OXY) went from 12 Permian rigs in May of last year, down to one rig. Even OXY’s large and well-financed competitors like Exxon Mobil (XOM) and Chevron (CVX) have significantly scaled back their aggressive plans for the Permian and are estimated to have only have 14 rigs between them by the end of this year, down from ~70 rigs one year ago.

So Vor-Teq is no big loss. Whatever comes out of that, fine. But the company shouldn’t be prioritizing it or throwing more good money after bad. 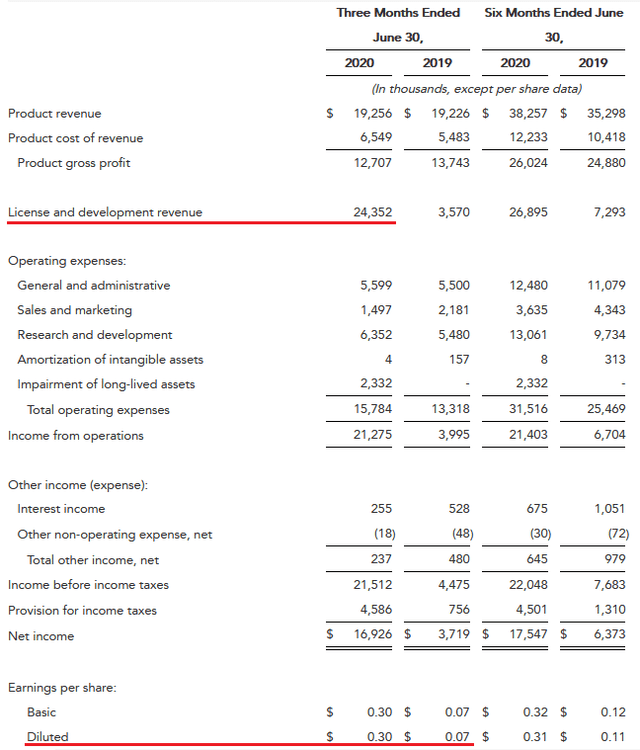 As can be seen above, product revenue of $19.256 million was flat yoy while costs rose ~$1.1 million. However, license and development revenue jumped to $24.4 million due to the termination of the license agreement with Schlumberger. As a result, the bottom line rocketed to $0.30/share from $0.07/share in Q2 of last year. That was a $0.07/share beat.

ERII recently announced the opening of a new 54,000 sq ft manufacturing facility in Tracy, CA in order to keep up with PX exchanger demand. President and CEO Robert Mao said:

We expect revenue growth of up to 25% this year in our Water segment, and the opening of our Tracy facility gives us confidence in fulfilling our strong backlog of orders while creating critical redundancy of our manufactured components.

Very good to see the company investing in the PX exchanger business as opposed to throwing more money at Vor-Teq.

Despite the over-hang of the Schlumberger deal over the past few years, ERII has actually emerged as a stronger company from the experience. I say that because the company ended Q2 with cash and cash equivalents of $63.0 million, and short-term and long-term investments of $33.9 million, for a total of $96.9 million in “cash”.

The bottom line here is that ERII is poised to convert a steady stream of SWRO awards (some being very large contracts) into shareholder returns. And what is interesting this year is that typically ERII gets the majority of its orders toward the end of the calendar year, but this year the contracts came early and were large. If ERII can ink a couple more large-scale SWRO before year-end, this stock is likely to move higher.

Currently, Seeking Alpha reports the stock has a forward P/E=19, which is fair considering the company’s past performance. However, with no debt, a large cash position, and a large backlog of SWRO projects, any additional contract wins will likely put some pep-in-the-step of ERII shares. Odds are good the company will announced an additional large contract (or possibly two) by year-end. I find the shares attractive here, and would accumulate under $8.50. They could easily rise to $9.50 a share by the end of the year on an addition contract win or two (for a gain of 12%, or ~36% on an annualized basis).

I will leave investors with a slide from a recent presentation showing estimates for SWRO spending according to the United Nations World Water Development Report, which you can read here. It is clear that ERII’s fortunes are not tied to Vor-Teq or fracking – they are tied to the world’s thirst and demand for potable water.

Disclosure: I am/we are long CVX, XOM. I wrote this article myself, and it expresses my own opinions. I am not receiving compensation for it (other than from Seeking Alpha). I have no business relationship with any company whose stock is mentioned in this article.

Prepared by Stephanie, analyst at BAD BEAT Investing The small regional bank Fauquier Bankshares, Inc. (FBSS) is a name we recently got back behind at $12-$13. Shares are up a good 20% or so from […]

US Elections Coverage Landing Page U.S. elections are coming down to the wire, with less than three weeks to go until November 3. A mixed composition of Congress could be the worst outcome for financial […]