On September 29, 2020, Norwegian energy giant Equinor ASA (EQNR) announced that it made a discovery in the North Sea. While this discovery is not especially large, it does reinforce my earlier article that stated that the Norwegian oil story may not be over yet. Equinor still has some growth prospects in Norway and this discovery can likely contribute to the company’s prospects in the region going forward. Equinor also has opportunities for growth elsewhere too, and while the low energy price environment has weakened some of these prospects in the near-term, the long-term story is still very much alive and this may create an opportunity for investors.

The discovery in question was located at the Swisher prospect in the North Sea. This prospect is located about 130 km northwest of the Norwegian city of Bergen and about 7 km west of the Fram field:

The North Sea is much deeper than the shallow-water wells that the company operates on the Norwegian Continental Shelf. The water depth at the Swisher site is 356 meters (1,168 ft.), which is nowhere near as deep as some of the things we have seen in areas like the Brazilian pre-salt, but it is still too deep for a shallow-water jackup to operate. Therefore, Equinor was forced to use an ultra-deepwater rig to perform the drilling. In this case, the West Hercules, a harsh environment-capable ultra-deepwater semisubmersible rig owned by Seadrill (OTCQX:SDRLF) performed the work. The rig drilled three wells at the prospect, discovering 13-38 million barrels of oil equivalents. The company is still performing the appraisal work to determine how much resources are at the site.

Admittedly, the total amount of resources at the site is not particularly great. At the highest estimate, it is still only a fraction of total global oil consumption. It does, however, have one thing that may result in the field getting developed. This is because the area where it is located is fairly well built out in terms of infrastructure. This fact greatly reduces the cost of developing it to a production state. Thus, it may be economical for Equinor to develop the field even if the act impact that the field would have on the company’s production is fairly minimal.

Investors and government officials have long been concerned about the future of Norway’s oil industry. There are even some reasons to believe that this has been a drag on Equinor’s stock price over the past several years. The Norwegian production of oil and gas topped out in 2004 and has been steadily declining since then. In 2019, it was at its lowest level since 1989, which has largely resulted in it being declared a mature market. However, some recent high-profile discoveries such as Johan Sverdrup have begun to reverse this trend. The Norwegian Petroleum Directorate predicted that the nation’s oil output will grow by 43% from 2019-2024. This new discovery could add some more faith to these predictions of an energy revival even though this discovery is fairly small compared to a find like Johan Sverdrup. Admittedly, the pandemic may have slowed down this story a bit, but it very much still exists.

As I have pointed out in numerous previous articles, Equinor has been working to expand its international presence in response to the perception that Norway is a mature market. One area where it has devoted considerable attention is Brazil. Brazil has some of the largest oil and gas reserves in the world, with some estimates predicting that the pre-salt deposits off of the coast could contain as much as 100 billion barrels of oil and natural gas. The company has already made a few high-impact discoveries in the region that it expects to bring online in short order.

One of the company’s major projects in Brazil is the Peregrino oil field. This field was discovered in 2004 and contains an estimated 300 to 600 million barrels of recoverable oil. This size therefore makes this one of the largest oil fields that is known to exist. The field started production in 2011 but has been ramped-up since then as a three-phase development project. This is far from the only project that the company has in Brazil, however. It plans to keep developing some of them despite the current low oil price environment. In fact, by 2020, the company expects to be producing 300-500,000 barrels of oil equivalents per day: 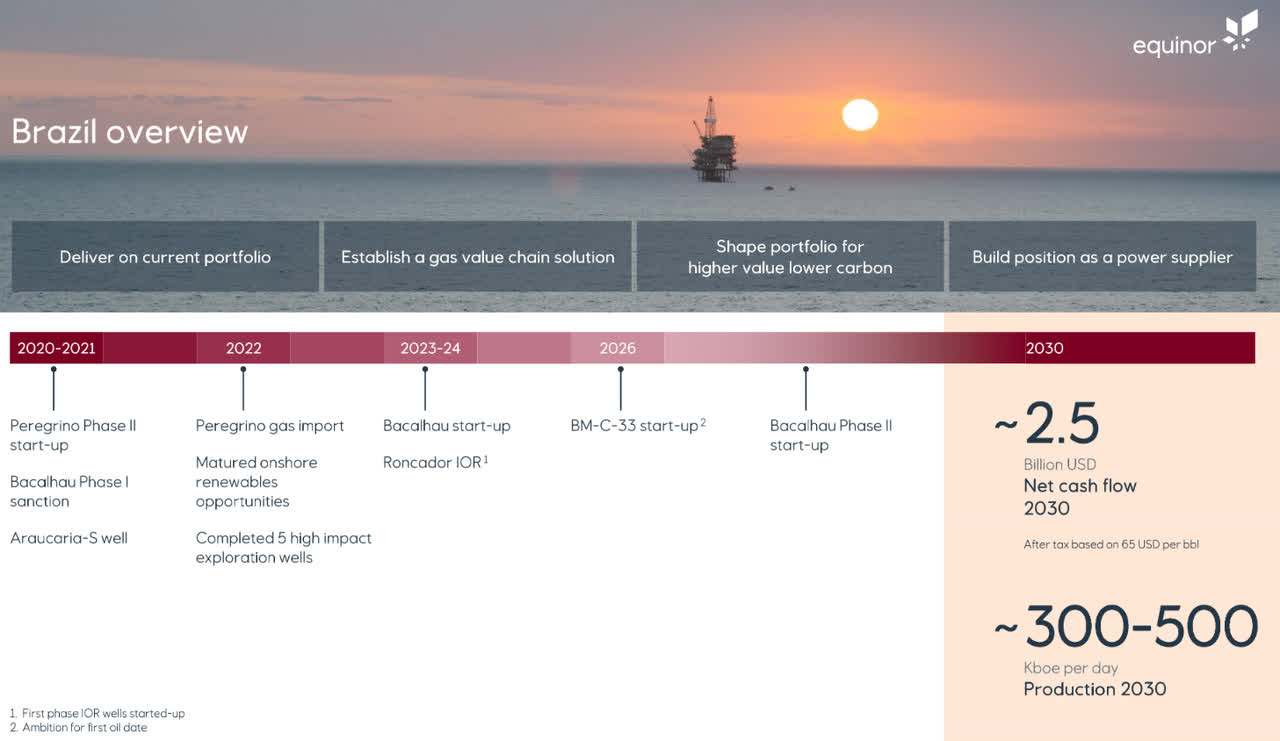 Unfortunately, since much of Brazil’s resources are located in ultra-deepwater environments, they are fairly expensive to exploit. This could be a problem unless we begin to see a significant rebound in oil prices. Fortunately, Equinor has made a great deal of progress at reducing its cost structure and becoming more efficient. As we can see above, Equinor will be able to generate a positive cash flow of $2.5 billion after-tax in Brazil by 2030 if oil prices are at $65 per barrel. As of the time of writing, Brent crude is at $40.95 per barrels so it still has a way to come, but it is reasonable to assume that it will increase somewhat in price by that time.

Equinor has also been expanding into the United States. The company is actually active in both renewables and in conventional oil and gas in this nation. I have already discussed the renewable opportunity fairly extensively in an earlier article, so in this one we will focus on its conventional resource production. The company operates in the Appalachian and Williston basins as well as offshore in the Gulf of Mexico. In aggregate, it produced an average of 405,000 barrels of oil equivalents per day in the second quarter of 2020: 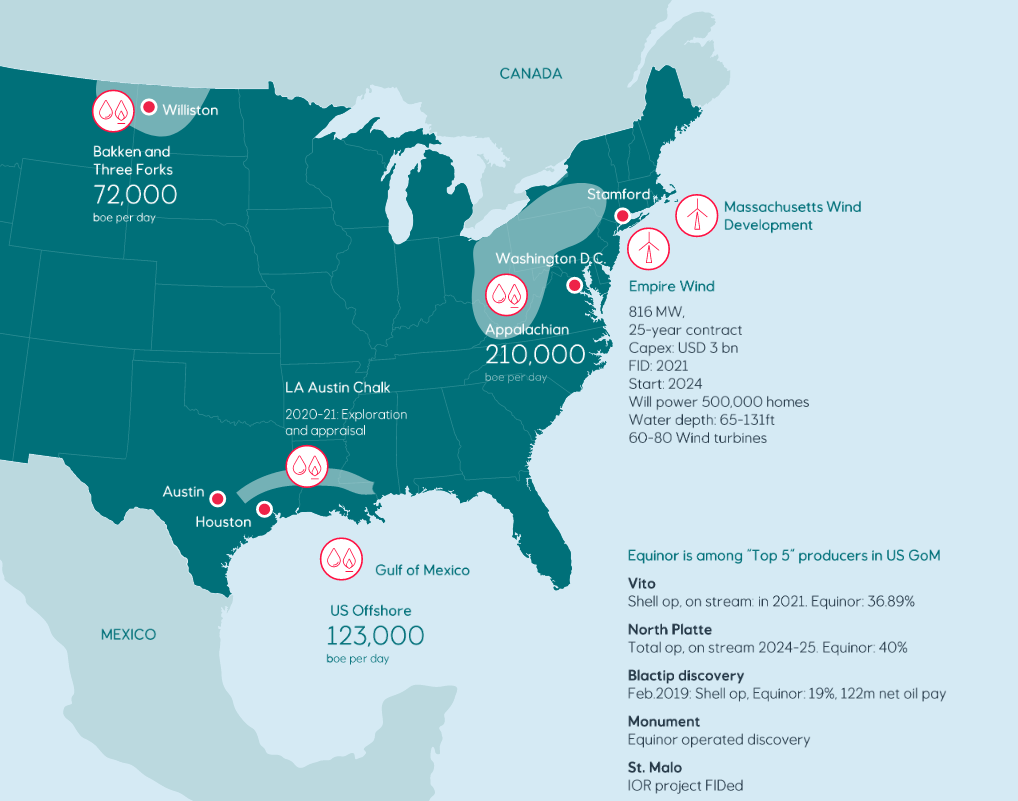 This works out to about 20% of the company’s second-quarter production. Thus, the United States is quickly becoming a very important nation to the company that adds a certain amount of diversity away from Norway. Unfortunately, some of these areas were among the most damaged by Equinor’s cutbacks in the face of the pandemic. The company completely stopped drilling and completions activities at all of its onshore operations and also shut down 20% of its wells in the Bakken and 30% of its gas wells in Appalachia. While it is quite likely that the company will restart production at these locations once the resource glut clears, for now they are a drag on the firm’s production.

As might be expected, the COVID-19 outbreak and resulting decline in oil prices had a devastating impact on the cash flows of energy companies like Equinor. This caused them to respond by cutting their expenses in order to preserve capital. Equinor has not been an exception to this. The company unveiled a plan to reduce its cash outflows by $3 billion this year in response to the crisis. The company’s plan included cutting its 2020 capital expenditures by 1.5-2.5 billion, reducing its operating costs by $700 million, and temporarily reducing its dividend by 67%: 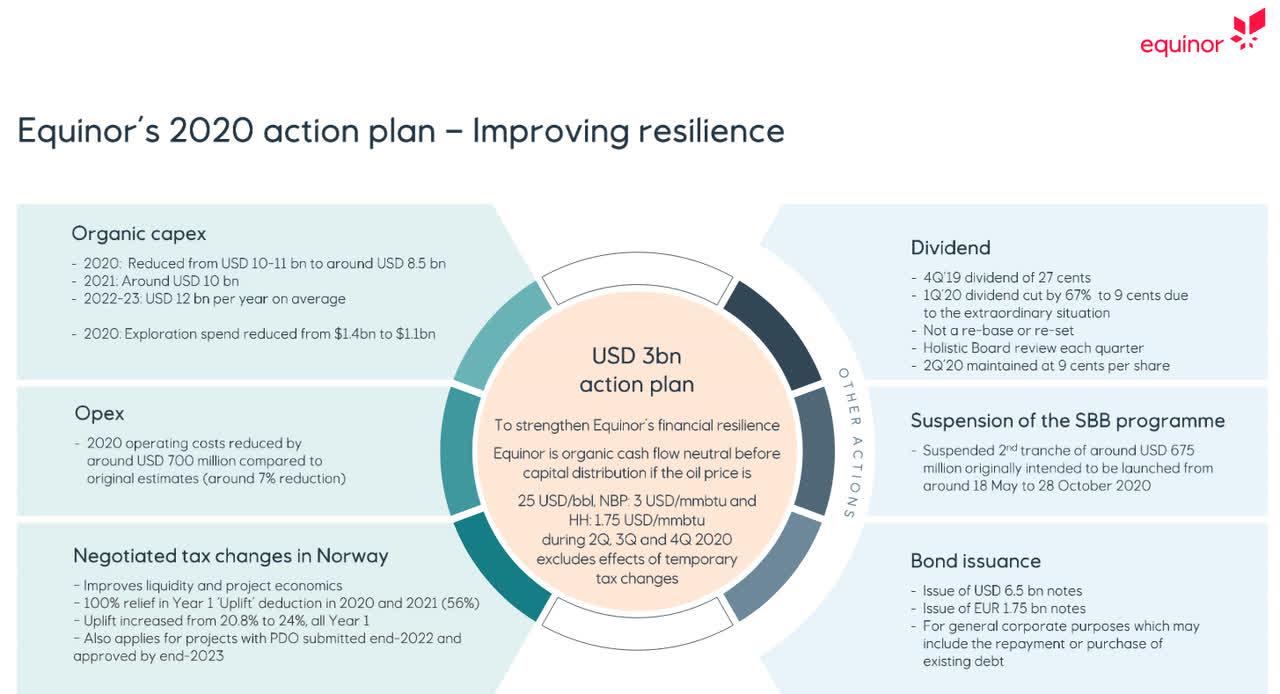 As might be expected, these cuts to capital spending reduce the company’s growth prospects compared to what it had at the start of the year, at least in the near-term. The company does still retain some growth prospects, though. In particular, it still intends to proceed with the projects that it has already sanctioned, many of which we have discussed in previous articles: 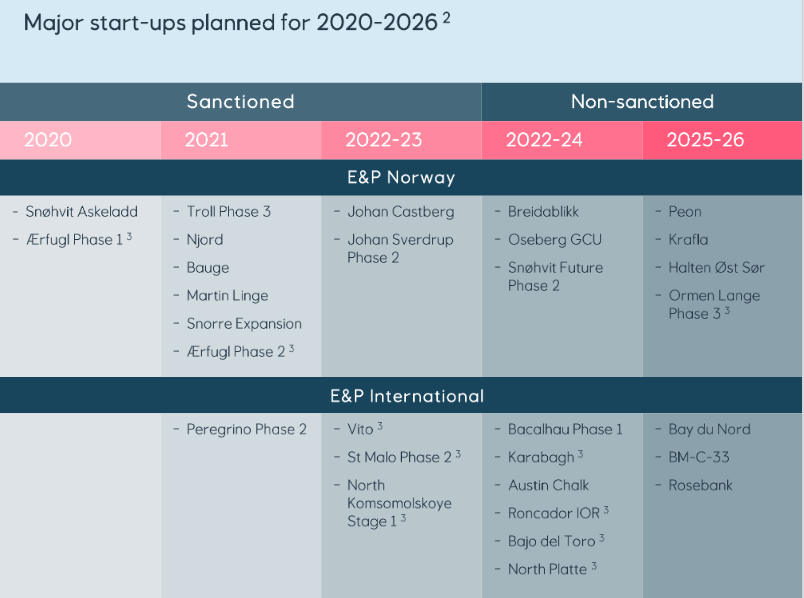 The fate of the unsanctioned projects in the above chart is still to be determined. In some cases, the company may choose to delay the development of them until the environment improves or it may cancel them altogether. If for some reason that is unfathomable right now energy prices improve quickly, then we may see the company begin developing them on the original timeline. One of the nice things about the company’s growth projects is that they are actually economic even in the current environment. These projects have a volume-weighted cash flow breakeven of less than $30 per barrel of oil equivalent produced. Note, however, that this does not mean that every single project will be highly profitable at that level nor does it mean that every project will even be cash flow positive, but it does mean that on the whole the company’s project portfolio should be reasonably solid and profitable at today’s price level.

As is always the case, we want to examine a company’s valuation before we make an investment in it. This is because we do not want to pay too much for its growth and earnings growth relative to its peers. Fortunately, Equinor is one of the only large energy companies that is expected to not only generate a profit next year but actually grow its earnings. Let us first begin by comparing the company’s forward price-to-earnings ratio to that of its peers:

(all figures are courtesy of Zacks Investment Research)

This ratio tells us how much we would pay for each dollar of earnings that the company is expected to generate over the next year. As we can see, Equinor appears to be somewhat more expensive than its European peers in terms of this ratio, but it is considerably cheaper than the only American integrated company that is expected to be profitable next year. However, the price-to-earnings ratio does not tell the whole story. This is because it does not take the company’s earnings growth into account. If one company is growing its earnings at a much faster rate, then it might be a better value over time than a company that is cheaper based on next year’s earnings. In order to account for this, we can use the price-to-earnings growth, or PEG, ratio. As with the regular price-to-earnings ratio, a lower value generally indicates a better value. Here is how Equinor compares to its peers in this regard:

(all figures are courtesy of Zacks Investment Research)

Here Equinor compares much more favorably to its peers. As we can see, once we take the company’s forward earnings growth into account, Equinor comes out being cheaper than any of its peers that are expected to actually produce a profit except for Royal Dutch Shell. Both Equinor and Royal Dutch Shell are excellent companies and both likely deserve a place in your portfolio. However, Equinor does not appear to offer the best value right now, but it might be worthwhile to watch the stock and pick up the company on any dips.

Disclosure: I am/we are long EQNR. I wrote this article myself, and it expresses my own opinions. I am not receiving compensation for it (other than from Seeking Alpha). I have no business relationship with any company whose stock is mentioned in this article.

© Reuters. Illustration photo of a Mastercard logo on a credit card (Reuters) – Mastercard Inc’s (N:) quarterly profit missed analyst estimates on Wednesday as the COVID-19 pandemic led to a slowdown in global travel […]