This is my update article on ERII. The first one you can read here.

Energy Recovery (NASDAQ:ERII) is a fluid dynamics, materials technology and ESG company. ERII invented and dominates pressure exchanger technology (“PX”) that allows recycling of up to 40% expended energy in virtually any high pressure and hydraulic process. Large scale reverse osmosis desalination plants would not be possible without its pressure exchangers and as a result ERII has a 100% markets share in desalination PX coupled with 70% margins. Demand for fresh water is projected to grow substantially as entire regions of the world face acute water shortages.

Recently, ERII is expanding its core PX technology into other verticals. First vertical – VorTeq, to be commercialized this year, is expected to disrupt the oil and gas industry by lowering fracking break evens by estimated $5-10 a barrel. VorTeq and three other verticals are expected to be unveiled within the next 3 months and promise to increase ERII’s revenues multiple fold over the next several years.

Energy Recovery delivered a solid set of results in the second quarter. Diluted EPS were $0.30, partially reflecting the gain on terminating the Schlumberger (NYSE:SLB) agreement. The Company reaffirmed guidance of 20-25% growth in Water Segment revenues for 2020 over 2019 and 2021 preliminary guidance of flat to 5% growth. At the same time the company reported the largest ever order backlog for large projects for 2021. “We have much higher order book than we had at this time last year” management reported on the call. “For the first time ever we have orders for two years ahead”. Based on those statements, we believe that the guidance is very conservative. The backlog is at a record, despite COVID-19 disruptions. The company should achieve 70% gross margins in the Water Segment which translates into operating earnings of about $0.50 per share. Adding $1.75 per share in net cash and a conservative multiple of 22x operating EPS (Xylem (NYSE:XYL), Flowserve (NYSE:FLS) and other water comparisons trade at 30-40x P/E despite having lower growth and lower margins) we get value of about $12 per share for the Water Segment alone (without any other verticals).

We also got a lot more visibility on VorTeq in the Oil & Gas Segment which is ready to test in the field by October at the latest. Based on estimated $6mn savings generated by the technology per fleet per year, likely 33% share of the economics, projected 250 fleets operating in the US alone exiting 2022 and (conservative) 75% market share, ERII will generate additional $375mn in revenues. At 2 times revenue (gross margin is expected to be over 50%), VorTeq represents additional $13 per share value for a total value of $25 per share in 2021, 200% upside from here. 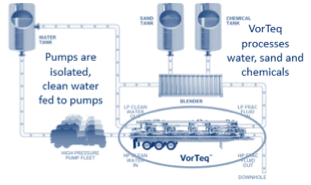 VorTeq 1.0 cost about $2mn to produce and was the size of a Mack truck. Caterpillar’s (NYSE:CAT) Kemper division, a highly specialized manufacturer, was supposed to produce it, a process that was expected to take 3-4 months. Under the old Schlumberger contract, ERII was getting paid $1.5mn fixed fee per year per fleet with expected savings of $3-5mn annually for the fracker to divide with the oil company. When the contract was signed, we believe, Schlumberger had around 80 fleets, a number that has likely been reduced to single digits in 2Q 2020. 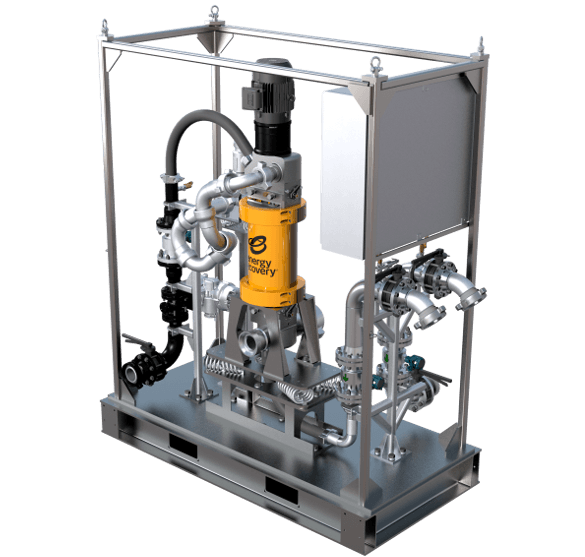 Developing VorTeq 2.0 has been a long process, as is to be expected when creating such breakthrough technology, but is 99% done. The idea was to lower the cost, increase durability and reduce complexity. That has been achieved and you can see the difference between the two versions for yourself. VorTeq 2.0 costs less than a quarter to manufacture (estimated to be $400-500k per unit), there can be multiple manufacturers at the same time, not just Kemper, and it is modular to increase flexibility depending on the frack job. VorTeq 1.0 was required to be able to handle 10,000 PSIs and 1-2 pounds of sand per minute, VorTeq 2.0 is able to go potentially above 12,000 PSIs and process 4-6 pounds of sand per minute. Thus, it can increase the range of fracks and the SPEED/EFFICIENCY of fracking, driving further savings, than just increasing the longevity of the pumps. So, 25% of the cost + 2-4x in throughput increase + increased flexibility = a win for ERII shareholders.

What is this worth? If we use the initial estimates of base savings of $6mn per fleet per year, it is clear that ERII’s share can be substantial. Moreover, it is not limited to $1.5mn per year and only two providers (Liberty and Schlumberger) as in the previous contract, but can potentially be higher since there is no exclusivity and it is hard to imagine any fracker in the world that can afford NOT to use this technology. In our valuation we estimated that ERII will capture 33% of the savings. It is obvious that the savings will fluctuate depending on a number of variables that are changing constantly, but we believe that this is a fair estimate at the moment.

Given that ERII has $95mn of cash on balance sheet and zero debt, the company can lease the VorTeq 2.0’s to the frackers without raising any dilutive financing. Obviously, the company can finance the units at today’s ultra-low interest rates as contra parties such as Halliburton (NYSE:HAL), etc. are easily financeable. Adding all this together, we are talking about potential $400mn plus in additional revenues in several years. Although margins may be a bit lower than the current 70’s% in terms of its desalinization technology, we think that 60% range is highly achievable. $400mn additional revenues is a lot of growth when current revenue run rate is around $100mn. It is not difficult to imagine that with oil market normalizing as the world economy recovers to see ERII earn $1.50-$2.00 three years out.

As appealing of a value proposition as VorTeq 2.0 is, the savings generated by the VorTeq technology can be considerably higher. Why? The answer lies in the current pump design. They are built to withstand the most severe conditions anywhere on the planet, save the bottom of the ocean. Solution is VorTeq 3.0 – replacing the expensive pumps needed in current environment with considerably cheaper and more efficient centrifugal pumps. While under development currently, we estimate that this can save additional millions of dollars annually, savings that can be at least partially captured by ERII in the future.

Given that fracking is one of the most difficult operating environments, mastering this one allows ERII to utilize it in other verticals that are much easier. Besides current uses in chemical plants, pipelines, etc. we can envision other uses where high pressure or hydraulics are present. This represents further substantial optionality for Energy Recovery investors and can more than double Desalinization and VorTeq revenues again. More on the size and specifics of the three new verticals will be revealed in October 2020.

ERII is a PX company. They manage to dominate the desalination with their technology. We believe that just their Water business is worth USD 12 per share, 50% upside from current levels. ERII is now working on importing their technology to fracking. If VorTeq is successful, the share price should more than triple to USD25. On Q3 call ERII will disclose further information on three other verticals they are now working. One of these should be substantially larger than VorTeq. If that is right, there is substantial share appreciation ahead.

Disclosure: I am/we are long ERII. I wrote this article myself, and it expresses my own opinions. I am not receiving compensation for it (other than from Seeking Alpha). I have no business relationship with any company whose stock is mentioned in this article.