Investment thesis: the economic fundamentals of the oil industry are weak: oil prices are stuck in the lower 40s, which is putting tremendous pressure on the industry. The latest Dallas Fed report shows the industry is still in a sharp contraction, which is causing the XLE to decline. Avoid this sector for now.

The Dallas Fed released its quarterly survey of the energy industry. Here are the Q/Q results:

The good news is that things have quantitatively improved. The level for business activity and capital expenditures rose strongly; data for employment, employee hours, and wages/benefits were also up. The company outlook turned positive while the uncertainty index declined somewhat.

However, let’s place this data into context by looking at the Y/Y numbers:

These numbers have been weak — and largely so — for a year. That tells us that the industry has been experiencing problems for a fairly long time. Here’s a chart of the top-line number: 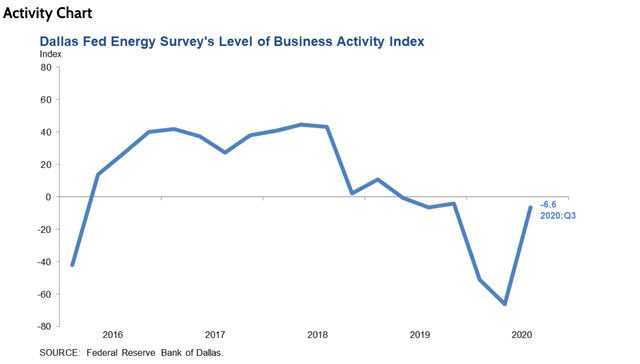 The industry’s overall activity level turned negative in early 2018 and has been declining since.

The anecdotal comments are concerning — and not just in a “things might be kind of bad way,” but in a, “the sector is in a very difficult time.”

The possibility of a double-dip recession isn’t small; there is concern that the US will see a virus resurgence in the fall occurring in conjunction with flu season, which would force a new round of lockdowns. This is also a sector that has a great deal of debt, which means bankruptcies are high — a trend which is expected to continue, if not grow worse.

There’s extreme competition for services, so firms have no pricing power. Couple that with a large amount of uncertainty and weak sentiment (which means the sector can’t attract new money) and you have a very dire financial situation (and this is before we add in a weakened financial sector due to rising loan delinquencies and write-offs).

Finally, the sector is bleeding cash while some firms have little work.

The sector’s output is weak:

The left chart shows total industrial production for oil and gas extraction. The number dropped sharply as a result of the lockdowns and has yet to make a meaningful rebound. The right chart shows the Y/Y percentage change which is now negative and near its lowest level in five years.

Let’s take a look at some charts, starting with the oil market: 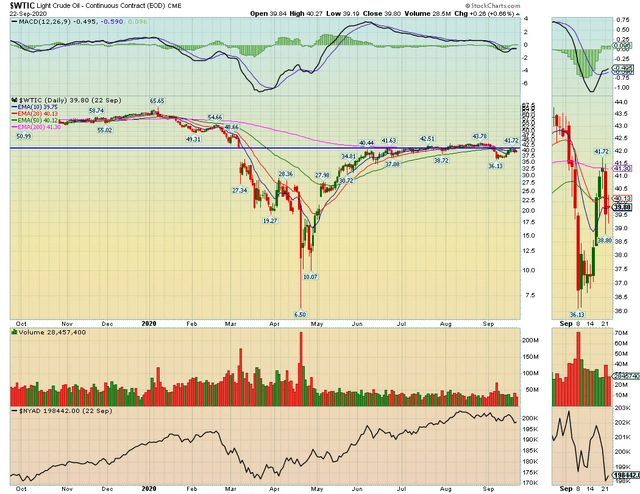 Oil prices crashed during the lockdowns. In response, OPEC cut production, which sent prices back into the lower 40s, where they’ve trended for the last three months. This is a key level: it is derived from the large down day in early March after which the market gapped lower. 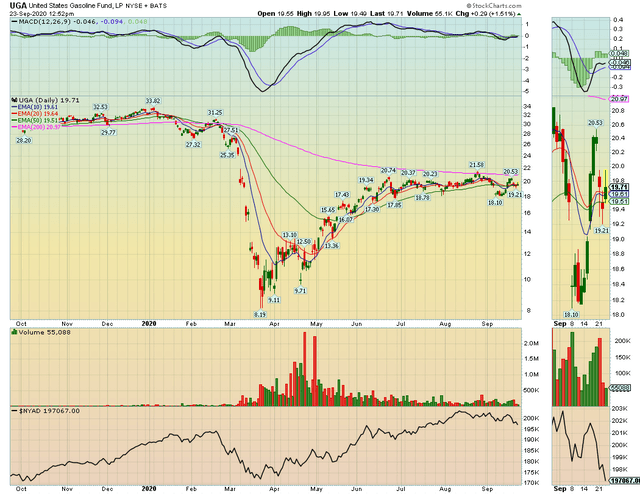 Gas prices followed the same path as oil prices. Gas is currently trading right below its 200-day EMA, which has provided a fair amount of resistance for the last few months. 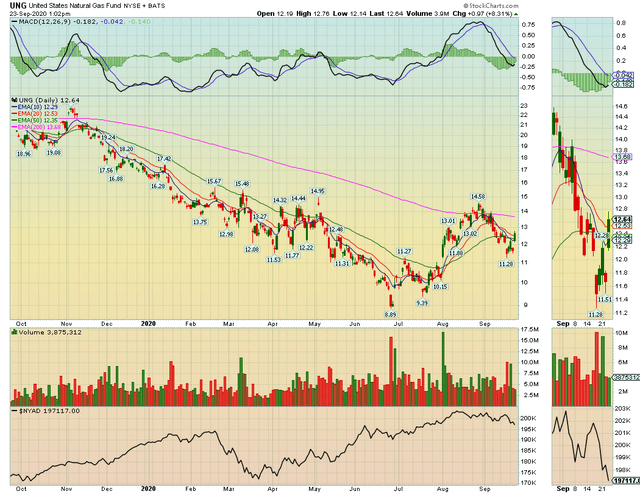 Natural gas may have bottomed during the summer. Prices rallied to just above the 200-day EMA in late August but have since retreated a bit.

Given this backdrop, it’s no surprise that the energy ETF is weak: 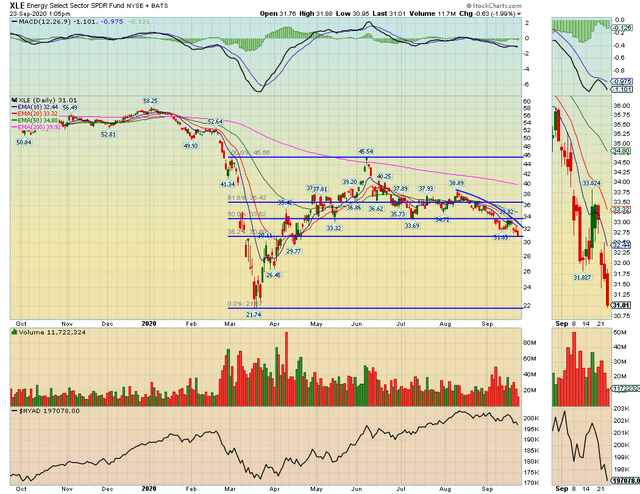 The XLE dropped sharply as a result of the lockdowns. It rallied to the 200-day EMA in early June but fell back. They trended in the mid-30s but have since started a move lower.

Given the weak fundamental picture and deteriorating chart, avoid this sector for now.