Total repos on the Fed’s balance sheet of February 5, released Thursday afternoon, have plunged by $85 billion from the peak on January 1, to $170 billion, below where they’d first been on October 2:

Under these “repurchase agreements,” the Fed buys Treasury securities and mortgage-backed securities (MBS), guaranteed by Fannie Mae and Freddie Mac, or Ginnie Mae, whereby the counterparties commit to buy back these securities at a fixed price on a specific date, such as the next day (overnight repo) or a longer period, such as 14 days (term repo). Repos are by definition in-and-out transactions. When a repo matures and unwinds, the Fed gets its money back, and the repo on the Fed’s balance sheet goes to zero.

By buying these securities, the Fed adds liquidity to the market for the duration of the repo. When the repo matures and unwinds, the liquidity gets drained from the market. When a new repo transaction occurs, the process starts over again, but with a different amount and with a different maturity date.

The Fed is stepping back as lender-of-first-resort in the repo market.

The Fed raised the interest rate at which it offered the repos – for borrowers, the money is getting a little less cheap. Through January 29, the Fed’s average offering rate for overnight repos was 1.55%. On January 30, this increased to 1.60%. And the rate for 14-day repos increased from 1.58% effective through January 29 to about 1.61%.

The Fed had been the lender-of-first-resort in the repo market, by offering to lend at these low rates. By increasing the rate, the Fed is gradually making the cash it is handing out less cheap and less attractive compared to what banks might offer, and more of the demand is switching over to banks.

Overnight repos have been undersubscribed all year, so there is less and less demand for them at this rate. But the 14-day term repos are often oversubscribed, meaning there is more demand for this two-week cash at 1.61% than the amount the Fed is offering. As the Fed continues to raise the rate on two-week cash, at some point, it will become less attractive than the rate banks are offering, and demand will further decline.

In summary, the Fed has done three things to begin weaning the market off the Fed’s repo cash:

Over the five weekly balance sheets since January 1, the Fed has added $78 billion in T-bills, and the total amount of T-bills on the Fed’s balance sheet has now ballooned to $248 billion: 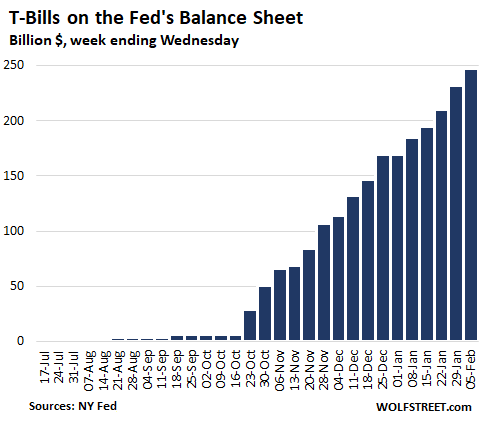 Since January 1, the Fed has fattened its stash of Treasury securities by $99 billion, of which $78 billion are T-bills, and $20 billion are longer-dated Treasury securities. This brings the balance of total Treasury Securities to $2.43 trillion, the highest since February 2018, and well on the way to reversing the QE-unwind of the Fed’s Treasury portfolio: 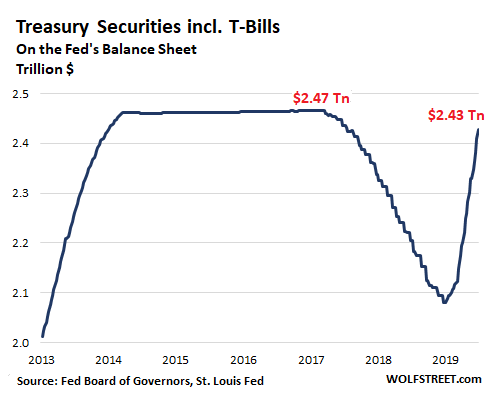 The lower mortgage rates over the past year produced a surge of refis as homeowners took advantage of the lower rates. As the old mortgage gets paid off, the principal balance is passed through to MBS holders. There has been such a flood of pass-through principal payments that far more than $20 billion roll off the balance sheet every month. So the Fed is buying enough MBS to maintain the $20 billion limit.

Over the past four weekly balance sheets, the Fed reduced its MBS holdings by $21 billion, to $1.39 billion, the lowest since October 2013: 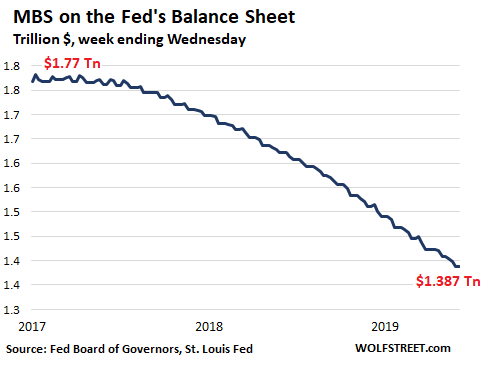 Sharply declining repos, ballooning T-bills, slowly rising “coupon” Treasury securities, and falling MBS, along with other activities reflected on the Fed’s balance sheet, all combined, have the net effect that total assets, at $4.167 trillion, are back where they’d been on December 25, 2019, and are down $9 billion from January 15 and $7 billion from January 1, but up a tad from last week. This is the image of a balance sheet that has stopped expanding over the past six weeks and is in a mild decline: 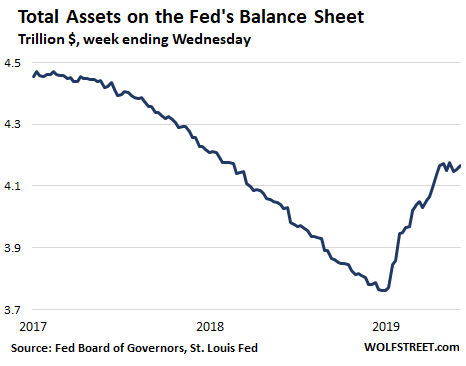 Between mid-September, 2019, and January 1, 2020, the Fed added nearly $410 billion to its balance sheet – a huge amount in just three-and-a-half months. The Fed was panicking about the repo market turmoil that threatened to blow up some of its darling hedge funds and mortgage REITs that borrow in the repo market – that have to borrow in the repo market because they’ve been borrowing in the repo market for years and cannot suddenly find alternate sources of cash. And if they run out of cash, they blow up. And rather than let capitalism do its thing with those risk-takers, the Fed stepped in and bailed out its cronies with over $400 billion. But now this task has been accomplished. And QE-4 appears to have ended.

Is this the black-swan event people have been predicting for years? Read… What Will the Coronavirus Do to the US & Chinese Economy?

Merchant segment driving growth at FISV Mykola Pokhodzhay Introduction Fiserv (NASDAQ:FISV) was the first company about which I published an article at Seeking Alpha. That was a year ago and now with full year results […]