The dominant story during the past 16 months has been one of imminent recession and stock market collapse. The last time we publicly addressed this narrative was three weeks ago. Since then, the word ‘recession’ has almost disappeared from the lexicon of investment writing, and confidence in the stock market has increased significantly. Such rapid flips in sentiment make us sit up and pay attention, since they often signal changes in trends. As it turns out, the market seems to be pulling back now, and this gives us a reason to revisit the facts and assess whether the recession narrative has changed. Or put another way, check the tightness of the ‘screws’ holding the economy together.

Building permits fell 3.9% from the earlier month (chart below).

This screw is only kind of loose(ish), not full-on “loose”, when viewed from a 10-year perspective (chart below).

David Rice (fellow SA author, and founder of econpi.com) has developed a useful BaR Analysis Grid which averages a host of economic indicators to give a Mean of Coordinates, and Leading Indicators relative performance. As his latest grid shows, both measures are now just inside the “Decline Quad”. Although there is still a way to go before we get close to the “Contraction Quad”, we think this qualifies as a loose(ish) screw. 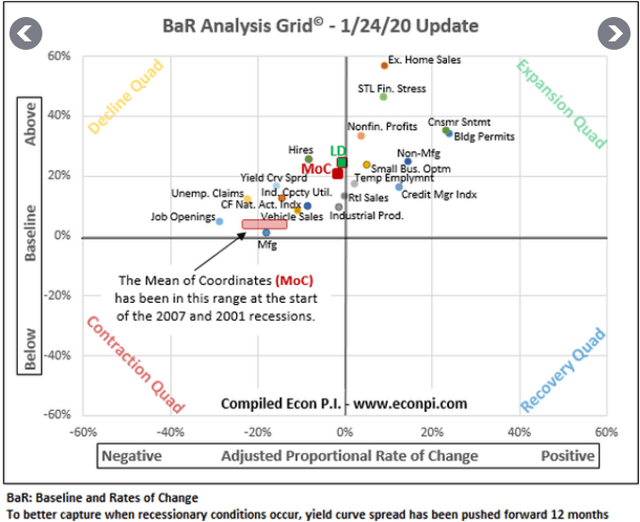 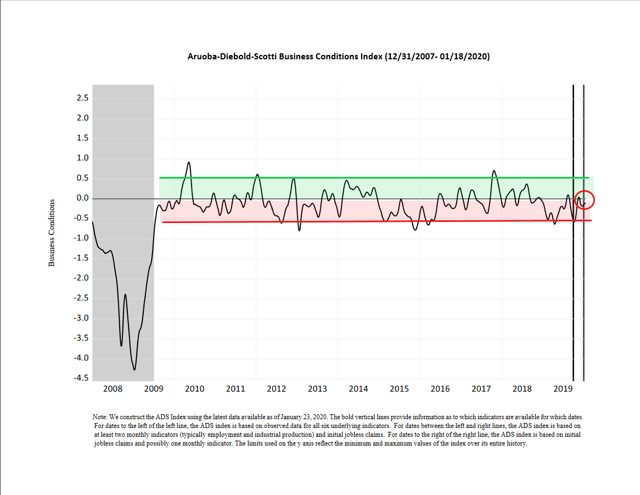 The IHS Markit Manufacturing PMI fell to 51.7 in January from 52.4 in December. That makes it three months in a row of declines and a loose economic screw (chart below).

Industrial production is a loose screw after four months of declines (chart below).

Recessions are always preceded by at least one year of declining housing starts (chart below).

Housing starts jumped 16.9% from the month earlier (chart below).

Housing starts have rocketed higher to a new 10-year high; the opposite of a recession warning (chart below).

The NAHB Housing Market Index fell to 75, but that was relative to an over 20-year high of 76 (chart below).

The non-farm payrolls continue to print within the range that has been in place since 2010 and are trending higher (chart below).

Initial unemployment claims always rise the year before a recession (chart below).

Continuing unemployment insurance claims always rise ahead of recessions, but rising claims do not always lead to recessions. One has to go back to 1974 to find a lower number of unemployment claims, and although the numbers have stabilized around this level, it does not mean they must rise from here any time soon (two charts below).

The unemployment rate tends to cross under the natural (long-term) unemployment rate at either the halfway point, or the two-thirds point of the bull market (blue ratios below). The crossover occurred in 2017, which means the next bear market would start in 2021 or 2025, depending on whether it is a 2/3 or 1/2 crossover, respectively (chart below).

The IHS Markit Composite PMI rose to 53.1 in January from 52.7 in the previous month. That is three months in a row of increases (chart below).

The ISM Non-manufacturing PMI increased to 55 in December from 53.9 in November (chart below).

The IHS Markit Services PMI rose to 53.2 in January from 52.8 in the previous month (chart below).

The University of Michigan consumer sentiment index is back up near the highs of the past decade (chart below).

Retail Sales increased 5.8% in December of 2019 over the same month in the previous year. It is the biggest annual gain since August of 2018 (chart below).

The Atlanta Fed GDPNow estimate is predicting ~2% growth in Q4/19, and the Blue Chip consensus is 2.0%. We cannot call this a loose screw (chart below). 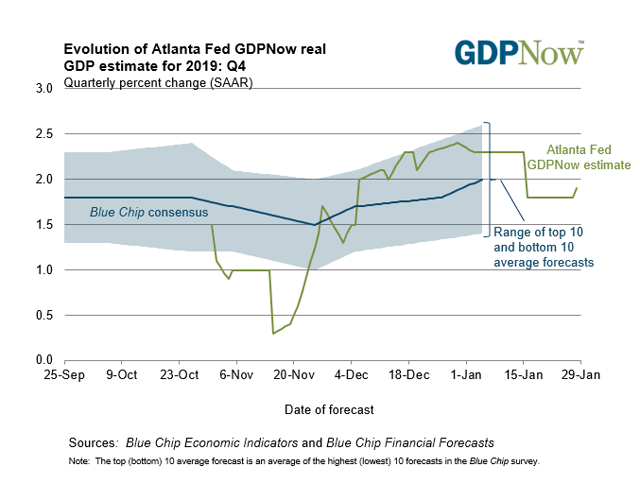 Federal government taxation removes money from the private sector, and federal government spending on goods and services adds money to the private sector. Reductions in deficit-spending always precede recessions; Clinton reduced the deficit so much that the Treasury account went into surplus, and the deficit reduction that took place between 2010 and 2015 would have caused a recession in 2015 had the deficit not been increased in time. The federal government has legislated $1.3T of deficit spending in fiscal 2020. It is hard to see how the economy could contract when there is that much money being added (chart below).

The economy is held together by many screws, and not all the screws are tight at the same time, but we think there are enough tight ones to prevent a recession. If it is reasonable to expect the economy to continue its expansionary ways, then going long the stock market is the logical investment strategy, and the pullback we may be experiencing in the stock market could be a good “buy-the-dip” opportunity. The simplest way to do this is to buy broad market ETFs such as SPY, QQQ, DIA, and IWM. And for those with a stomach for leverage, they can buy SPXL, TQQQ, or options on the ETFs themselves.

” I have not seen this type of analysis anywhere else. Please keep up the awesome work! – James “

“ Happy ANG subscriber here. I believe them to be the best broad market analysts on seeking alpha. “

” Best here in seeking alpha…@ANG Traders . Best of the best! “

Take advantage of our14-day free trial and stay on the right side of the market and Away From the Herd.