With Eastman Chemical (EMN) scheduled to release full-year results after markets close on Thursday, January 30, it might be time for investors to get reacquainted with this specialty chemical company trading at a forward P/E of 10.0x and carrying a dividend yield of 3.5%.

Since I last wrote about the company back in September, management has increased the quarterly dividend for the 10th year in a row to $0.66 per share for a 6.5 percent increase from $0.62 per share in the prior quarter. The company has also continued to buy back shares with excess cash flows from operations which will be discussed in more depth later in this article.

In Q3 2019, the company generated $416M of cash from operating activities, free cash flow of $306M and returned $160M to stockholders with $85M of dividends and $75M of share repurchases. That being said, diluted earnings per share decreased to $1.93 from $2.89 in Q3 2018 in what the company blamed on worsened global economic conditions as uncertainty related to trade issues escalated and impacted consumer discretionary markets such as transportation and consumer durables. For investors willing to look through the economic cyclicality of the business, the current weakness presents a good buying opportunity in a great business.

Introduction to the Company

While it might not be clear from the name Eastman Chemical, the company shares a history with the iconic photography company Eastman Kodak (KODK) from which it was spun off in 1994 and still shares the name of their founder George Eastman. After seeing supply disruptions in the Kodak photography business during World War I, the chemical business was founded to provide the Kodak photography business an independent supply of chemicals. The new chemical business was not satisfied just being an internal supplier to its Kodak photography parent company and continued to expand its chemical engineering expertise into new areas. Today, the company splits segments of its business into four groups as outlined below and is a global company with the United States and Canada only accounting for 42% of sales in 2018.

By World War II, the company had developed a reputation of chemical expertise and at its peak was producing a million and a half pounds of explosives each day for the U.S. government. By the 1960s, the company was producing polyester fibers for apparels and home furnishings, plastics for the automobile industry, and a growing number of industrial chemicals. Notably, Eastman is the first manufacturer in the U.S. to develop and commercialize technology that derives chemicals from coal (rather than petroleum) with the first coal gasification facility beginning operations in 1983.

Today, the company continues its chemical engineering innovation with products such as Naia, which is an environment-friendly cellulosic yarn made from sustainably sourced wood pulp aligned with the Forest Stewardship Council’s (FSC) sourcing standards. With Eastman Chemical’s research & development spending of $235M in 2018, the company looks set, in my opinion, to continue innovating on the chemicals needed for everyday life.

Eastman Chemical’s strong operations have allowed the company to achieve an average return on equity (ROE) and return on invested capital (ROIC) of 23.0% and 11.9%, respectively, over the past decade. While the company is cyclical along with the industry, this average level of profitability is well above my rule of thumb of 15% ROE and 9% ROIC, allowing me to be confident that, in my opinion, Eastman Chemical is able to maintain and continue to increase its intrinsic value over a business cycle. 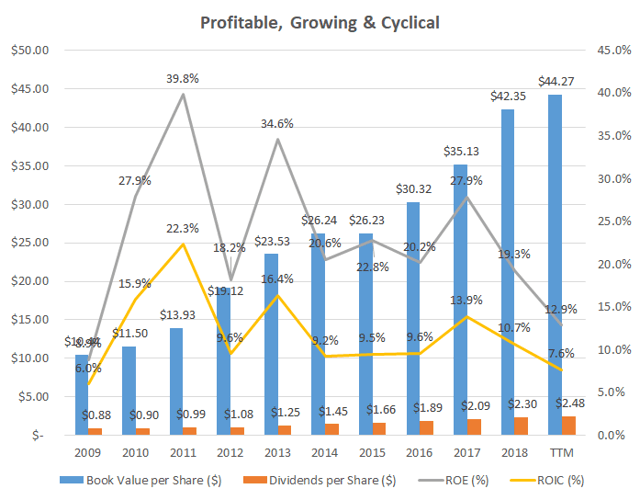 Eastman Chemical showed these acquisitions were accretive, as expected, by quickly paying back the debt and repurchasing the newly issued shares. Currently, financial leverage sits near decade lows at 2.68x and the company’s interest coverage ratio is a healthy 5.3x in the trailing-twelve-month period. This gives me comfort that the company will be able to drive through the next recession with a stronger capital structure than it had back in 2008-2009. 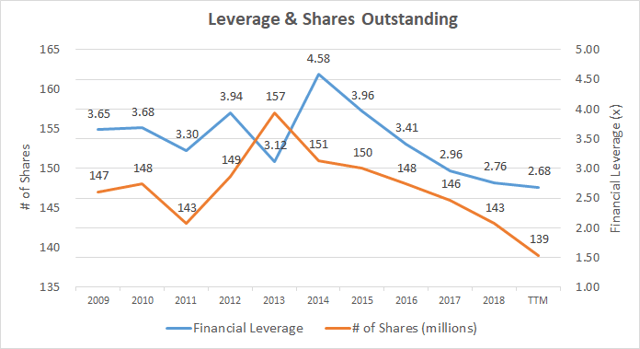 Since its latest acquisition with shares being issued back in 2012, Eastman Chemical has lowered its outstanding shares by approximately 2.0% annually from 157 million in 2013, at the height of its recent acquisition spree, to 139 million in the latest Q3 2019 reporting period. Together with the current 3.5% dividend, these annual share repurchases would include total shareholder yields of 5.5%. I always like to see buybacks from a company, especially if done at decent valuations and not financed by issuing debt, as it shows good capital discipline and management’s long-term faith in its own business. With these repurchases taking place alongside an improving capital structure, they look sustainable for long-term investors in addition to the current dividend. But let’s take a look at where the cash from operations is going to gain some more assurance.

To get an idea of the sustainability of dividends and share repurchases, we can take a look at what percent of cash flow from operations is available to be returned to shareholders after making the necessary capital expenditures. Do note that for the purposes of fitting everything on the below chart, the debt issued in 2009, 2012, and 2014 used to help finance the aforementioned acquisitions has been left out and only the debt repayments with cash flow from operations in other years have been shown. 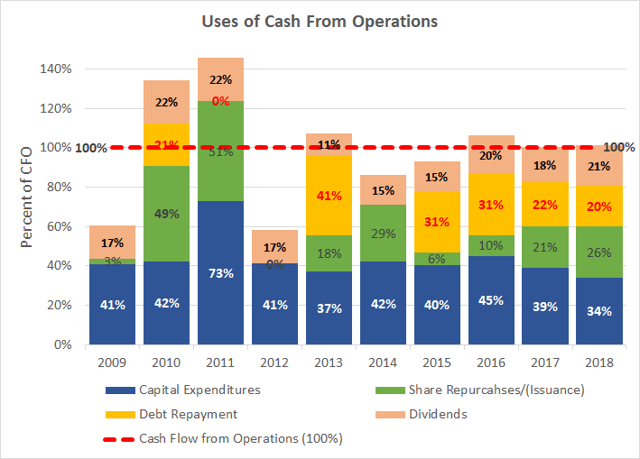 As can be seen, Eastman Chemical does a tremendous job of returning cash flow to shareholders in the form of dividends and share repurchases. With capital expenditures and acquisitions only taking up on average 65% of cash flow from operations over the past decade, this leaves approximately 35% to be returned to investors in the form of dividends and share repurchases. With average cash flow from operations of $1,521M over the past five years, this 35% would imply free cash flow to shareholders of $532M for a 5.3% free cash flow yield at the current $10.0B market capitalization. This is right around the current total shareholder yield of 5.5% discussed earlier.

Eastman Chemical is a strong company with a long history and diverse presence. The company looks well prepared to handle the next economic recession, in my opinion, with financial leverage near decade lows at 2.68x and the company’s interest coverage ratio a healthy 5.3x in the trailing-twelve-month period. The company’s robust cash flow from operations leaves a good deal to be returned to shareholders through their dividend yield of 3.5% and share repurchases of approximately 2.0% since 2013. Eastman Chemical has a lot of the attributes that I look for in a long-term investment.

Disclosure: I am/we are long EMN. I wrote this article myself, and it expresses my own opinions. I am not receiving compensation for it (other than from Seeking Alpha). I have no business relationship with any company whose stock is mentioned in this article.

Additional disclosure: I am long EMN with an average cost base of $76.50.

While the information and data presented in my articles are obtained from company documents and/or sources believed to be reliable, they have not been independently verified. The material is intended only as general information for your convenience and should not in any way be construed as investment advice. I advise readers to conduct their own independent research to build their own independent opinions and/or consult a qualified investment advisor before making any investment decisions. I explicitly disclaim any liability that may arise from investment decisions you make based on my articles.

© Reuters. France stocks higher at close of trade; CAC 40 up 1.78% Investing.com – France stocks were higher after the close on Thursday, as gains in the , and sectors led shares higher. At […]