Earnings day has come for cloud service provider Dropbox (DBX). On May 7, the San Francisco-based company is expected to deliver $451.6 million in revenues for a quarter that will likely benefit from the stay-at-home economy. The implied 17% YOY top line increase would be roughly on par with the growth rate of the past few quarters. Adjusted EPS is estimated to land at $0.14, quite a bit higher than last year’s ten cents delivered in the first quarter.

While I believe that Dropbox will, in fact, report strong results in the first period of 2020, the bar has been set high. First, 4Q19 seems to have marked a bottom line inflection point, and the company will be pressed to maintain optimism towards margin expansion and cash flow generation. Second, DBX remains a long-term underperfoming stock since the 2018 IPO, but shares have been beating the broad market by more than 20 percentage points since the S&P 500’s (SPY) all-time highs of February 19th. Momentum will now be put to the test.

What to look for in Dropbox’s earnings release

For starters, I will be looking to fill in the missing information on the graph below: paying user count and ARPU (i.e., per-unit revenue). The trend has been highly favorable lately as Dropbox continues to convert free into monetized customers, and as the transition from document storage and sharing to office productivity and collaboration (e.g., Dropbox Spaces) continues to add value to the platform.

Assuming higher demand for storage capacity and document management functionality in a period when office workers were forced to telecommute, growth in paid users could set records in 1Q20. Although the overlap is not perfect, the impressive increase of 16% in Microsoft’s (MSFT) productivity and business process revenues may have set the precedent. 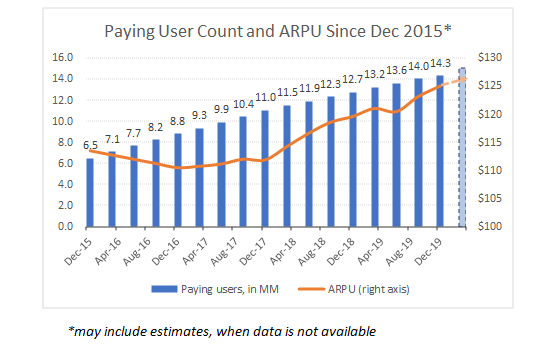 Margins will probably trend along with the key revenue drivers highlighted above. Due to scale and operating leverage, Dropbox’s profitability will likely see substantial improvement if user base and per-unit revenues benefit from the recent change in work habits.

One of the benchmarks to keep in mind is Dropbox’s 2024 op margin target, boosted three months ago by eight percentage points to 29% at the mid-point of the guidance range. I will be satisfied to see the rate climb further into the high teens this quarter, making the long-term goal still achievable.

I remain a DBX bull

I recognize that investors and analysts may expect quite a bit from Dropbox in 1Q20. The company’s mid-2019 product revamp coincided with higher demand for productivity and collaboration tools driven by the COVID-19 crisis. With the stock up about 7% since the S&P 500 topped in February 2020, Dropbox’s quarterly results will need to impress in order for the share price climb to continue.

But I am not much of a short-term trader in general, much less of DBX. My investment thesis on this stock is long-term biased and based on a few tenets that, I believe, will remain largely unchanged even after earnings day. To me, DBX is a buy today primarily due to (1) the predictability of the SaaS model and (2) the encouraging revenue growth and margin expansion prospects.

The graph above depicts DBX’s current-year and next-year P/E ratios, and highlights how the multiples have come down sharply to current levels of less than 30x that seem at least reasonable for this growth SaaS stock.

But I go beyond and look further down the road. Should Dropbox meet its long-term free cash flow target of $1 billion, the implied forward EV-to-FCF of only about 7x today points at even more enticing valuations. For reference, Salesforce.com’s (CRM), Microsoft’s and Box Inc.’s (BOX) comparable multiples are currently all north of 30x.

Disclosure: I am/we are long DBX, MSFT, CRM. I wrote this article myself, and it expresses my own opinions. I am not receiving compensation for it (other than from Seeking Alpha). I have no business relationship with any company whose stock is mentioned in this article.

da-kuk/E+ via Getty Images Almost three months ago, I stated that Permian Basin Royalty Trust (NYSE:PBT) had become less attractive due to its steep rally, which had resulted in a 10-year low distribution yield. Since […]

RESERVE Bank governor Glenn Stevens delivered some hugely important messages yesterday. Ahead of this morning’s inflation figures, on which next week’s RBA interest rate decision pivots. The most immediate message he delivered is that the […]