Stocks experienced an abrupt uptick in volatility on Thursday as the S&P 500, Nasdaq 100 and Dow Jones fell to their respective support levels nearby. While buyers returned quickly to stem the bleeding, the initial move saw stocks threaten nearby noteworthy support in – what was effectively – a single motion. The ability for price to fall so precipitously and so abruptly while trading near record highs, devoid of an obvious catalyst, suggests fragility and could leave the door open to further declines of a similar nature.

Looking elsewhere, hints of risk aversion are rampant. First and foremost, gold has staged an incredible multiday rally that has seen the precious metal and safe haven asset climb to the highest levels since 2013 – and a continuation higher seems likely.

Secondly, the export-driven Australian Dollar suffered a substantial breakdown versus the US Dollar earlier Thursday, breaking through longstanding support and moving beneath decade lows.

While the stock and foreign exchange markets have sounded off, so too has the bond market as the 3-month, 10-year yield curve (3m10s) suffered its deepest inversion since October. Widely watched by traders, the 3m10s can be a key predictor of a looming recession should it remain inverted for a full quarter. Nevertheless, falling yields highlight a surge in bond-buying which may suggest investors are looking for safety.

US 3-Month and 10-Year Yield Curve 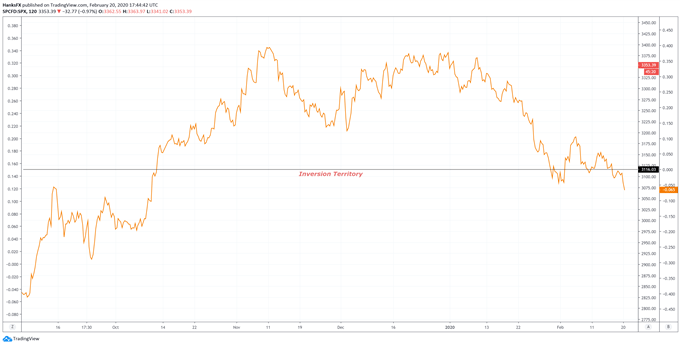 That being said, the current bull run has proved resilient and a brief spike in volatility does not necessarily require follow through. Given the broader fundamental backdrop and price action in other markets however, it seems as though further volatility may be in store in the days and weeks to come. In the meantime, follow @PeterHanksFX on Twitter for updates and analysis on the stock market.

rrodrickbeiler Rates are back on the rise. Following what was interpreted as a dovish FOMC press conference by Jay Powell last week, a hot jobs report (along with spicy JOLTS and claims data) has reset […]